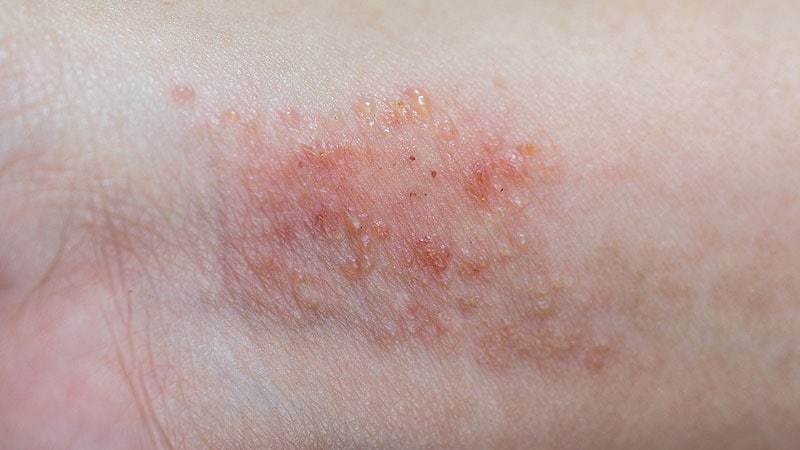 Atopic dermatitis (AD) may be especially active and severe among older adults, and it may be associated with increased risk of comorbid conditions common in later stages of life, including osteoporosis, dementia, and cardiovascular disease.

During the Revolutionizing Atopic Dermatitis virtual symposium, Katrina Abuabara, MD, highlighted the epidemiology and burden of AD among older adults. She began by noting that the disease peaks in infancy and older adulthood. In an analysis that she and her colleagues made of physician-diagnosed AD among more than 8.6 million patients in the United Kingdom between 1994 and 2013, the mean prevalence in a given year was 12.3% among those aged 0-17 years, 5.1% among those age 18-74 years, and 8.7% among those age 75 and older.

“We saw what we expected in early infancy with very high rates of active disease,” said Abuabara, associate professor of dermatology and epidemiology at the University of California, San Francisco. “We also saw a second peak in older adulthood. This was more surprising to us because the disease hadn’t been as well studied in this population.” Researchers who analyzed data from the Global Burden of Disease Study, which evaluates disease-related morbidity and mortality worldwide, found a somewhat attenuated peak but a similar trend around the world. Its authors ranked AD as 15th among all nonfatal diseases.

In a separate analysis, Abuabara and colleagues evaluated records of more than 9.1 million primary care patients in the United Kingdom between 1994 and 2013, and who were followed for an average of 6 years. They examined AD activity and found that, based on doctor visits and prescriptions, AD appeared to be active in 48% of those aged 0-17 years, compared with 42% of those aged 18-74 years, and 60% of those aged 75 years and older.

“Also, when we looked at the distribution of active disease in older adults, we saw that those who were older had more severe disease,” she said. When they evaluated the prevalence of AD by sociodemographic factors, AD increased with age among older adults (adjusted odd ratio, 1.06), while it decreased by 14% annually among children. In addition, female older adults had about three-fourths the odds of prevalent disease as their male counterparts (aOR, 0.73).

In a study that drew from medical records of 3.85 million primary care patients in the United Kingdom, AD was more common in Asian and Black ethnic groups than in people of White ethnicity. In addition, higher socioeconomic status was associated with a greater incidence of eczema in infants aged younger than 2 years, but the reverse was seen for all other age groups.

To identify subtypes of atopic eczema based on patterns of disease activity through mid-adulthood, Abuabara and colleagues evaluated members of two population-based birth cohorts: the 1958 National Childhood Development Study and the 1970 British Cohort Study. The patients were classified into one of four patters of disease activity followed to age 50: rare/none, increasing, decreasing, and high. “We found that there was the early-onset decreasing subgroup, which tend to have a lower probability of AD over time,” Abuabara said. “We also found that there was a small subgroup that had a constant high probability of AD over time. But we were surprised to find a subgroup with increasing probability over time. This was a fairly sizable subgroup.”

In an earlier study, she and her colleagues examined whether there were differences based on whether people had adult-onset or childhood-onset disease in the same two cohorts of U.K. patients. Those with childhood-onset disease had stronger associations with known genetic risk factors and they tended to be of higher socioeconomic status. “They also tended to have more asthma and other allergic comorbidities,” Abuabara said. “On the other hand, the adult-onset group [after age 23] were more likely to be female, more likely to be smokers, and tended to have lower childhood socioeconomic status.”

According to the best available evidence, she continued, there is good data on higher relative risk of osteoporosis/fractures and dementia specifically among older adults with AD, and good data on associations with cardiometabolic disease and atopic disease among adults overall, as well as data showing that AD does not seem to be associated with cancer overall. In a study conducted by Jonathan I. Silverberg, MD, PhD, MPH, and Mohammed S. Shaheen, JD, the researchers used physician-diagnosed AD to investigate the associations of osteopenia and osteoporosis in two large U.S. databases: the 2006-2012 Nationwide Emergency Department Sample (NEDS) database and 2002-2012 National Inpatient Sample (NIS). Among patients aged 50 years and older, AD was associated with a higher odds of osteoporosis in NEDS (aOR, 1.31) and NIS (aOR, 1.25) and osteopenia in NEDS (aOR, 1.86).

In a separate matched cohort study, Abuabara and colleagues used U.K. primary care patient data to evaluate the association between AD and fracture and whether fracture risk varies with AD severity. Overall, they observed a 10% increase in fracture risk among people with AD, compared with those without, especially those of the hip, spine, pelvis, and wrist. “We found that there was a dose-response effect,” she said. “Those with more severe eczema had a much higher risk of fractures. When we looked at different age groups, we found a similar increased risk in the oldest adults as in younger adults.”

In a longitudinal cohort study of primary care medical records from more than 1.1 million individuals in the United Kingdom, AD was associated with an increased risk of vascular dementia (hazard ratio, 1.88), Alzheimer’s disease (HR, 1.69, and other/unspecified dementia (HR, 1.48; .269). “We found a nice dose response, where people with more severe AD had higher rates of dementia,” Abuabara said. Results from a more recent, smaller study of patients in Taiwan also found an increased risk between AD and the risk of dementia, but not a dose-response effect, likely because of a much smaller sample size.

Mounting research suggests that the risk for cardiovascular disease is also elevated in patients with AD. “There is some variability in the literature, but I think it’s important that when we’re talking about atopic dermatitis to think about the heterogeneity of the disease,” Abuabara said. In a meta-analysis and systematic review of 19 studies on the topic, she and her colleagues found that AD was associated with an increased risk of myocardial infarction (relative risk, 1.12), stroke (RR, 1.10), ischemic stroke (RR, 1.17), angina (RR, 1.18), and heart failure (RR, 1.26). “For all the different [cardiovascular disease] outcomes there was increasing risk with increasing disease severity,” she said.