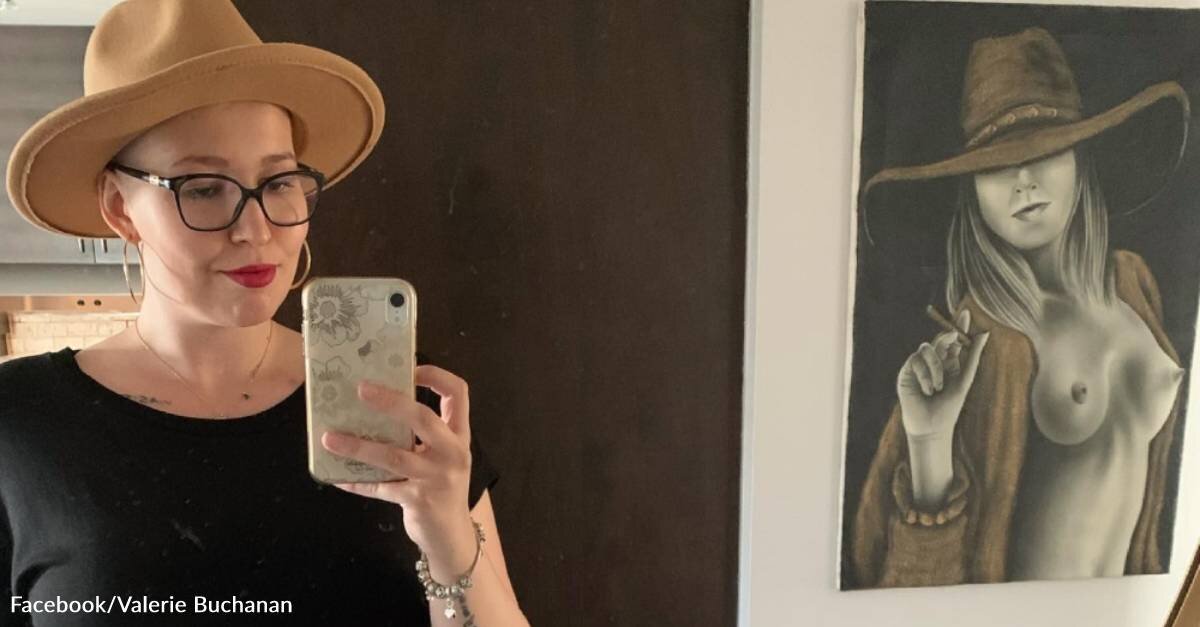 Nobody ever likes to find a suspicious lump in their breast. But for Valerie Buchanan, the truly difficult part of finding a lump the size of a bottle cap in her left breast was the terrible timing. She first felt it in March of 2020, just as the COVID-19 pandemic was sweeping across North America and lockdowns were becoming widespread.

The 27-year-old Canadian didn’t immediately think it must be cancer. All the same, she tried her best to get into contact with a medical health professional who could see her in person. She had no luck, even with her family doctor, whose voicemail was not correctly set up at the time.

The healthcare professionals that Valerie was able to contact via phone predicted that the lump was simply a benign cyst or a fibroadenoma, which is a non-cancerous form of tumor. Because of the lockdowns, they told her not to come in for an in-person examination.

“They would tell me, ‘I really wouldn’t worry about cancer — you’re too young,’” Valerie recalls. “I wanted to believe it was just a cyst; I really didn’t want it to be cancer. I’m not going to argue with a doctor. I knew something was wrong, but I didn’t feel like it was enough for me to go on a crusade against all the medical professionals who said don’t worry about it.”

Valerie was instructed to use hot and cold compresses on the area, alternating between them every 15 minutes. But the lump didn’t go away.

“Maybe I should have been more aggressive and asked to still be checked, but I’m not one to question what the appropriate course of action is. I’m not a doctor,” says Valerie.

By summertime, her lump had grown to the size of an egg and was now causing a shooting pain in her breast. Following a move from Ottawa back home to Montreal, Quebec, she finally managed to see a doctor in person, but this doctor also thought it was a benign cyst or fibroadenoma and did not order any further tests or treatment for it, instead reassuring her that she was too young for cancer.

“It felt like I had to go through all these circles and jump through obstacles just to see someone, depending on if the first person thinks it’s valid enough or deems my symptoms worthy enough,” Valerie recalls. “I should have just been able to get a referral with no problem. They were very quick to brush me off because of my age. It was always a problem before, but the pandemic made it worse.”

Valerie continued to call any clinic or imaging center she could find in the hopes of getting a mammogram. Most places told her she was too young for one, she needed a referral, or they weren’t accepting new patients. Many never returned her calls.

“At one point I was just Googling clinics and aimlessly calling any number I could find online, one by one,” she says.

By February, Valerie’s lump was the size of an avocado, and she’d begun to develop new symptoms too. She returned to the clinic she’d originally been seen at and was referred for an ultrasound but had to wait more than three months to get it.

When her arm went numb in April while she was waiting for her appointment, she finally decided something must be done right away. She finally got ahold of a clinic that would take her, and she paid over $2,000 to get an ultrasound, a mammogram, and a biopsy.

Her test results showed that she had stage 3C triple-negative breast cancer, an aggressive type of breast cancer that can be very difficult to treat. Aside from the tumor in her left breast, there was also a tumor in a lymph node in her armpit.

“There were a couple days I was angry,” says Valerie. “I felt numb, too, but I was ready to do whatever I had to do. My life is more important to me than my chest.”

Valerie underwent 16 rounds of chemotherapy, a double mastectomy, and five weeks of radiation therapy. “My treatment is more aggressive now because I was diagnosed later,” she says. “It stripped me of my options.”

Luckily, Valerie is responding well to treatment. After three rounds of chemotherapy, the tumor in her lymph node is gone. The tumor in her breast has also shrunk by about 20 percent. In the midst of it all, she’s made peace with the whole experience and decided to focus on just getting well.

Valerie has opted to share her story so that other young women will know to advocate for themselves when they feel something is wrong, no matter what the doctors say. The Canadian government is working on pushing the standard age at which women start getting breast cancer screening from 40 to 45, and Valerie hopes her story will convince people that this isn’t the right decision.

“We can’t work backwards!” she says. “Hopefully this will aid as a step in the right direction.”

Thank you to Valerie for sharing her story and to Robin Della Corte of the Montreal Gazette for her original piece.