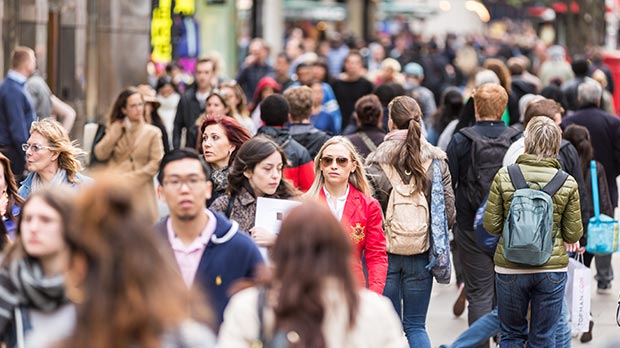 We monitor cancer statistics to better understand the disease. They show us the progress we’ve made to help more people survive cancer, and they help us focus our work to keep that progress going.

As striking as those numbers are, we need to be clear: these ‘early-onset’ cancers are still uncommon. Around 90% of all cancers affect people over the age of 50. In fact, 50% affect the over-75s, even though that’s quite a small part of the overall population.

So, in younger adults, this is only a slight increase in the number of cases, and from a low starting point. But the trend is important. The evidence suggests that more adults under 50 may be getting cancer than ever before.

Beating cancer means stopping that trend. And that starts with finding out why it’s happening.

Now, with our support, a team of researchers led by Dr Shuji Ogino and Dr Tomotaka Ugai from Harvard University have reviewed and compared data from around the world to help doctors and scientists understand what’s going on. (Ogino is funded through Cancer Grand Challenges, an initiative we co-founded with the US National Cancer Institute).

The team’s findings are an important step towards working out why cancer cases in younger adults are increasing. The patterns they’ve uncovered could also help us protect more people from the disease.

Ogino and Ugai are molecular pathological epidemiologists, which means they look at how changes to things like our lifestyles and environment can affect the way diseases evolve and progress. It’s a type of detective work. And, fittingly, when their team started looking more closely at cancer in adults under 50, they found some clues. Dr Shuji Ogino is a professor at Harvard University in the US.

Here’s the first one. You might think that richer countries have healthier people, but the number of early-onset cancers actually seems to have increased fastest in countries with more money.

In fact, the research team have even been able to trace the trend back to the huge economic boom that followed the end of the Second World War. That’s when the consumer societies and lifestyles we recognise today really started to take shape.

Particularly from the 1950s, people in Europe and North America started earning more money than ever before. And many of them worked in manufacturing, making exciting new things they could spend that money on.

Those new products included cars and TVs – as well as tasty, low-effort fast food and ready meals perfect for eating on the go or the sofa.

The mid-20th century is also when overall cancer incidence began to increase. Our latest calculations show that the lifetime risk of cancer in the UK rose from 39% for men born in 1930 to 54% for men born in 1960. For women, it jumped from 38% to 48%.

We’ve written about changes in lifetime cancer risk before. Most of the increases over the past century can be explained by the steady rise in life expectancy. But, on average, people born in 1930 could already expect to reach 60. The fact people are living longer can’t be the main reason for increasing cancer rates in the under-50s. Something else is going on. Dr Tomotaka Ugai is a research fellow at Harvard.

They found that rates of later-onset bowel cancer began to increase in the US in the 1950s. Rates of early-onset bowel cancer then began increasing in the 1990s. This means that more people born since the 1950s began developing the disease, and at a much younger age than the generations that had gone before them.

The researchers believe it’s possible that the same risk factors could have played a part in both trends. What’s more, the time lag might be telling us something vitally important.

Changes in lifestyles and diets could have contributed to a rise in cancer cases in over-50s quite quickly. This is because, as people get older, they develop more changes in their cells, some of which have the potential to become cancerous.

Those small mutations are rare in younger people. But early life exposures to the same risk factors might make the start happening slightly sooner, or increase the chance that they become cancerous once they begin to develop. That wouldn’t necessarily cause cancer, but it could increase the chances that people develop the disease at a younger age.

And that could explain why early-onset cancer is on the rise.

For their latest paper, Ugai and Ogino brought together a team of investigators with expertise across 14 cancer types. They found that 12 of them were becoming more common in younger adults.

Again, this is most obvious in bowel cancer. Ogino calls the disease, which is the third most common cancer and the second leading cause of cancer death worldwide, the “spearhead” for the early-onset cancer increase. In the UK, the rate of bowel cancer in the under-50s has increased by around 50% since the mid-1990s.

Now they’ve found evidence that other cancers seem to be following that trend, Ugai and Ogino think it’s important to investigate whether the causes might be related.

“Many risk factors are actually shared in many cancer types,” Ogino points out. “Obviously, the whole body is interconnected, and, with food, there’s a line from the mouth to the anus.”

Out of the 12 cancer types the team found were becoming more common in people under 50, 8 relate to the digestive system.

Next steps for early-onset cancer research

The digestive system is clearly an important area for future research. The rise in early-onset cancers seems to line up with big changes that started in the 1950s, but that doesn’t mean we can say anything for certain today.

“Our diet has changed a lot,” says Ogino. “We eat more processed and refined food and sugar. That might be a clue, but we don’t know exactly how different factors might have contributed to the increase in early-onset cancers.”

Still, Ogino’s particularly interested in how this change in what people eat might have affected the microbiome, the community of bacteria that lives in our digestive system and contributes to our health. He’s part of the Cancer Grand Challenges OPTIMISTICC team, which is exploring how the microbiome in the gut can drive cancer and influence a person’s response to treatment.

Looking at the birth cohort effect from the 1950s onwards, Ugai and Ogino argue it’s worth investigating whether what we eat when we’re young can change the overall balance of bacteria in our digestive systems and act as a risk factor for early-onset cancer. This bacteria (E.coli) plays an important role in the gut microbiome.

That’s a research question, rather than a conclusion. Still, we already know that diet can contribute to cancer risk factors in adults. Overweight and obesity is the UK’s biggest cause of cancer after smoking. Weight can be linked to cancers outside of the digestive system, too. Endometrial cancer, which starts in the uterus and is also on the rise in younger adults, is one example.

Other trends that the researchers believe could have contributed to the rise in early-onset cancers are also clearly linked to wider health. Children get less exercise today than they used to, and they also spend more time sitting down. On average, they sleep more than an hour less than they did in the early 20th century, as well.

We know what works

There’s a lot more research to do, but there are some things we can be confident about. If you’re an adult of any age, keeping a healthy weight, being more active, cutting down on processed and red meat and eating more wholegrains and foods high in fibre can reduce your risk of certain cancers.

But following that advice isn’t always easy, especially given the way unhealthy food and drink is sold and marketed. In the UK, products that are higher in fat, salt and sugar are cheaper, better advertised and more likely to be included in price promotions such as 2-for-1 deals.

Although the shift to unhealthy food started in wealthier countries first, it does the most damage to the poorest people living in them.

But some rich countries eat differently.

Ogino and Ugai live and work in the US, but they were born in Japan. Both of those countries are very wealthy, but Japan isn’t seeing the same rise in early-onset cancer cases related to the digestive system, especially in men.

It’s another clue. Japan is one of the only high-income countries where most people don’t usually eat what’s known as a western-style diet, which is heavy on red meat and high-fat, high-sugar processed food. Instead, Japanese people eat more fish, vegetables and legumes (like beans and lentils). In Japan, people rely on fish and plants for more of their protein.

Most children in Japan also walk or ride bikes to school, which helps them get more exercise than children in other countries, who typically travel door to door in buses and cars.

South Korea is ethnically and economically similar to Japan, but South Korean lifestyles are closer to US and western European ones. Early-onset cancers are rising sharply in South Korea, too.

Ogino thinks studying the differences between exposures in Japan and other rich countries could help us find out more about how to prevent certain early-onset cancers.

How to make progress

Ogino and Ugai plan to keep investigating early-onset cancers as more data becomes available. Ogino also thinks we need more studies that follow large groups of people from birth onwards so we can find out the truth about how different early-life exposures affect cancer risk.

That’s a long-term project. We’re also funding research that could help improve how we treat and prevent early-onset cancers much sooner. Team OPTIMISTICC is a good example. They’re working to transform bowel cancer outcomes for people around the world by developing ways to manage and manipulate the microbiome.

But there’s no need to wait for any of those results. There’s a lot we can do today.

For one thing, we can work to reform the current food system so it’s easier for families to lead healthier lives. Setting up more robust restrictions to stop brands advertising junk food to children would be a good place to start.

Helpfully, the UK Government has a plan to ban junk food ads before 9pm and restrict them online. It’s not perfect, but the Government’s own estimates suggest it could reduce the number of children with obesity by around 20,000 before 2030.

That’s a compelling statistic. Those in power could do with paying more attention to it. The changes have been delayed until October 2025 at the earliest. As part of our work to prevent more cancers, we’re keeping up the pressure to make sure important reforms like this happen sooner.

“When I look back, I was probably exposed to a lot of risk factors as a kid,” says Ogino. “I can’t change that. Babies can’t change their exposures.”

That’s obvious – and it shouldn’t be a problem future generations have to think about. Healthier lifestyles should be attainable for every family. But, today, the balanced diet recommended by the NHS demands time, energy, and money that a lot of people, especially those with children, don’t have.

We’re working to make sure the Government puts time, energy and money into changing that.

For more information on the topics raised in this article, you can visit our About Cancer pages.

Public health experts draft recommendations to help prevent vaping product use-associated lung injury
Spanish Consensus Document on Severe Adult Asthma Updated
Outdoor play reduces some of the negative effects of screen time for young children
What Is RxPass, and Can It Save You Money on Prescription Medication?
Questioning Medical Traditions