It’s well known that exercise reduces cancer risk by helping people maintain a healthy weight, but can it make any difference for people living with cancer?

“Research is showing exercise can be helpful both during and after cancer treatment,” says Martin Ledwick, our head information nurse.

“That research is ongoing and everyone has different needs and abilities, so it’s really important you discuss with your doctor what forms of exercise might work for you.

Two people who have found exercise to make a big difference in their cancer journey are Mary Twitchett and Keith Hatherell. Here they share their stories. 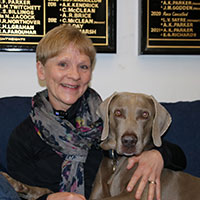 Mary is a semi-retired nurse who has overcome breast cancer for a second time. She’s currently training to run the London Marathon for Cancer Research UK.

“When I was having chemotherapy, I was confident that keeping active was the most special thing, improving blood flow to aid the drugs in reaching my cancerous cells and helping to alleviate some of the post-treatment fatigue,” she says.

Such is Mary’s belief in the power of exercise for people with cancer, she helped found a monthly run specifically encouraging people to ‘move against cancer’ where she lives in Cambridge.

“During my cancer journeys, yes, there were some days I felt horrible, but it made me appreciate the ability to get up and move even more.”

One of my big sayings, even though some look at me as though I’m mad, is that there can be health in cancer.

From the UK to LA

Mary already has an impressive sporting CV, including becoming the UK’s number one marathon runner between the ages of 55 and 60 when she won the Los Angeles Marathon for her age group in March 2018, just two months before she was first diagnosed with breast cancer. Her initial treatment was successful, but she required more after a recurrence in May 2021. She finished chemotherapy and had an operation that September, leaving her clear again.

That same month, Mary was covering two kilometres a day, supported by her group of friends who called themselves Team Mary, and they raised over £6,000.

“There’s only health in cancer because of the scientists,” she says. “Because of the research and that’s why we need to raise funds for Cancer Research UK.”

One of those scientists is Dr John Campbell, a senior lecturer in human physiology at the University of Bath. He’s researching how exercise can be harnessed to improve cancer treatment.

He was awarded a Pioneer Award – set up to support early-stage projects that are novel, innovative and have the potential to break new ground in cancer research.

He explains: “Exercise is likely to play an important role across the cancer survivorship continuum, and is a likely factor explaining why Mary reports such positive outcomes.

“We think that exercise achieves this positive effect by changing the way the immune system works against cancers that typically provoke strong immune responses.

“Breast cancer is a type of cancer that typically provokes strong immune responses, from a type of immune cell called T cells, and we think exercise is likely to help the immune system against this type of cancer. Keith taking part in a Tough Mudder event in Badminton

Following his diagnosis with hemangioendothelioma, a rare cancer that grows from the cells that make up the blood vessels, he was told by medics that he could face life in a wheelchair and at best he would have to walk with a stick.

But Keith was determined to live his life with sports and exercise very much at the front and centre of his weekly routine to provide him with a positive mental attitude.

“I was told my cancer was a one in a one hundred million case,” he says. “I had hemangioendothelioma of the pelvis, which meant a quarter of my pelvis and muscle had to be removed and my hip was replaced, and my hamstring cut completely.

“Having led a very active life playing football and snowboarding up until that point, things looked bleak, but following major surgery I take a positive view and see myself as lucky, not unlucky, in spite of what has happened.

“Despite having a dodgy hip and half an arse, 18 months after my operation I took part in a Red Bull event in Austria, which meant running 400 metres up a ski jump as part of an endurance race.

“I also wanted to return to football as it keeps me active, but as a goalie because I am unable to run without a hamstring.”

Going for Gold by entering the Paralympics 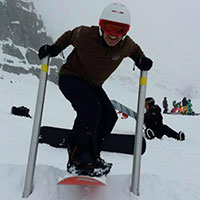 Keith training for the Paralympics in Austria

But if that wasn’t enough, Keith applied to be in the GB Snowsports Para-Team for the South Korea Winter Paralympics back in 2014/15. He was accepted to be on the team and met the criteria and after intense training for over six months went for his classification.

Keith picks up the story: “I was then declared too fit to continue as I was now outside of the physio grade used for classification purposes. I was really disappointed, but I am extremely thankful for the experience even though I couldn’t compete.

“I work twice as hard to make myself better and I believe that if my cancer diagnosis happened a decade ago I could have been an amputee, but thankfully science has moved on and my treatments haven’t stopped me living my best life and I make sure that sports is very much at the centre of how I live.”

You don’t need to become a marathon runner or take part in an extreme sport like Mary and Keith to get the benefit of staying active.

For many people the need to put on their trainers or just go for a walk and be outdoors is enough to reset their mind and help reduce stress.

Ledwick adds: “It won’t necessarily mean joining a gym or exercise class, and it could just be a walk to the shop, up some stairs or some gardening.

“Doing activities your doctor has said are appropriate can help in coping with treatment, aiding recovery and improving wellbeing.”

If you have questions about cancer go to www.cancerresearchuk.org/about-cancer for comprehensive, easy to understand information.

To chat online with other people affected by cancer join our fully moderated online community www.cancerchat.org.uk