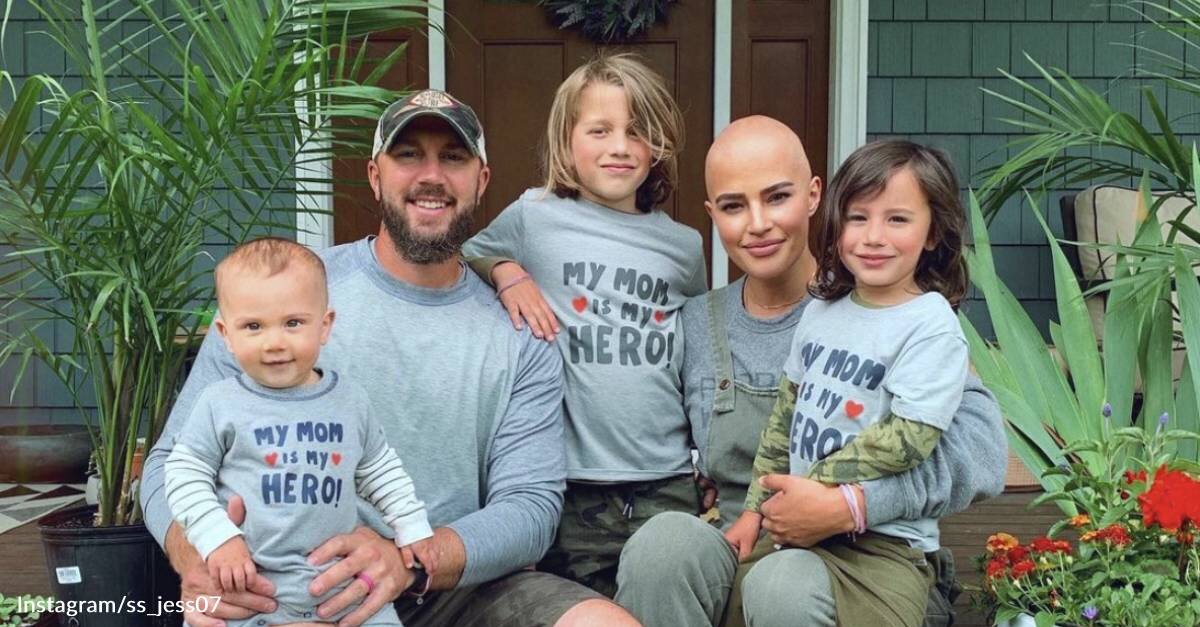 Sandy Jessop is a veteran who served in Iraq during Operation Iraqi Freedom in 2004 and then again in 2008. Her husband, Christian, also served with her in Iraq, and the pair now live in Wall, New Jersey, and work as high school teachers. Together, they’re focusing on bettering the world one student at a time and raising their three boys, Takoda, Reed, and Bow.

When she first felt a lump in her armpit, Sandy decided to ignore it, refusing to believe it might be cancer, and went on with her life. She even thought it had gone away after a while. But when her son rediscovered it while the two were playing together, she decided to get it looked at.

“I scheduled an appointment right away with my midwife. At that appointment, she found a lump on my breast and recommended I get an ultrasound,” Sandy writes on Instagram. “There, they found three swollen lymph nodes and three solid ‘highly suspicious’ masses on my breast. Largest one measuring almost 4cm. They recommended an immediate mammogram and biopsy. I left this appointment feeling pretty sure my life was about to change.”

Sure enough, Sandy’s life was about to change in a major way. That was on February 17th. 10 days later, on February 27, she learned she had breast cancer.

Due to COVID restrictions, Sandy had to go to her biopsy appointment alone. It was at that appointment that she realized her cancer was likely stage three already, which was understandably very tough for her to hear.

“I tried to keep myself together during the appointment, but as soon as it was over, I sat outside by the curb waiting for Chris to pick me up…I cried my heart out. Sobbed is more accurate. When Chris pulled into the parking lot, he parked, got out of the car, and I ran into his arms crying uncontrollably. We just held each other as he kissed my head and let me cry in his arms.”

Sandy and her doctors immediately made a plan to treat the stage-three breast cancer. She would undergo chemotherapy, followed by a mastectomy and radiation treatment. When she started treatment, her youngest son, Bow, who was still breast-fed, would have to be fed by donor milk.

Sandy explained to her sons as best she could what was going to happen, and she also told all of her students about her cancer. She continued working for a while as she underwent chemo, so it was important that the kids know what was going on. Happily, she was able to start working from home to decrease her chances of getting COVID or other illnesses while her immune system was weak.

After Sandy’s first chemotherapy session, she went through a wide variety of difficult symptoms, such as nausea, headaches, and exhaustion. Later on, she lost her hair as well. But it was all worth it when she learned that the tumor in her lymph nodes shrunk by 30 percent, which was much better than expected.

Through it all, Sandy is trying to find the positive things. She’s loving the little moments at home with her sons and husband, she’s enjoying learning about the science behind her treatment (since she’s a science teacher), and she’s embracing the cancer drugs that give her such nasty side effects but also offer lifesaving benefits.

“Second session, and it’s a love/hate relationship,” she writes on Instagram. “I love knowing I’m one step closer to ridding my body of this. But also, I hate how I feel the following days. I know my life comes to a halt as all energy goes to this internal battle.

“But I’ll choose to focus on the love. I mean really, if it wasn’t for this treatment, what I would have is a death sentence. But I don’t!!! I have an excellent chance of life because of these drugs. Chemo is promising me life, really. So damn! Thank you chemotherapy. Putting it that way, I take back the hate part. No hate, just love 🙌🏼💗.”

Sandy has been through so much, from fatigue to hospitalization for GI issues. When you have cancer, even something as simple as a common cold can send you to the hospital for IV fluids and testing to make sure it’s not anything worse that needs to be treated right away, because your body might not be strong enough to fight it off.

She’s been through multiple surgeries and different treatments, some of which were not part of her original treatment plan, such as chemo pills, hormone therapy, and proton therapy. She’s been at the point where she thought she was cancer-free and then was thrust into another round of chemo again after realizing the cancer was still present in her tissues. She’s had her breast reconstruction delayed in favor of more treatment. She’s been told she’ll need to continue treating her cancer for literally years. But still, she persists in finding joy in the small moments.

Sandy has had awesome family and friends to help her get through the tough times. Aside from her husband and kids, her sister and mother have been helping her out with childcare, food, and support, and her friends and work buddies have been offering their assistance as well. Friends and neighbors have offered to watch the kids at times. Others have given her rides to treatment. One friend who owns a wig shop even “practically rolled out the red carpet” for Sandy so that she could find the perfect wig to feel bold and confident in.

“This week I thought a lot about allllllllll the energy that’s been poured into me,” she writes. “From everyone and everything, to save my life,” writes Sandy. “From doctors and all the training they’ve had, all the machines, all the medicines, all the therapists, all the nurses, surgical technicians, pharmacists, radiation technicians, and even the physicists that make the calculations for this proton machine. It all comes together perfectly to save little ol’ me and that is SO humbling ❤️.”

But they all believe she deserves it.

“She’s undoubtedly the kindest, most generous person I know and has a heart of gold,” says Christa, who served with Sandy and Christian in Iraq and wrote a GoFundMe page for them. “When I see her circles of support, it’s because she’s magnetic and radiates unicorn power.”

The Inflation Reduction Act caps costs for Medicare patients on insulin. Where the push for broader relief stands
How and Why a $35 Insulin Price Cap Failed in the Senate
What is the impact of COVID-19 on male reproductive health?
Post-COVID Neurologic, Psychiatric Symptoms May Persist for 2 Years
Mr. Men Little Miss launch book series exploring kid’s emotional wellbeing