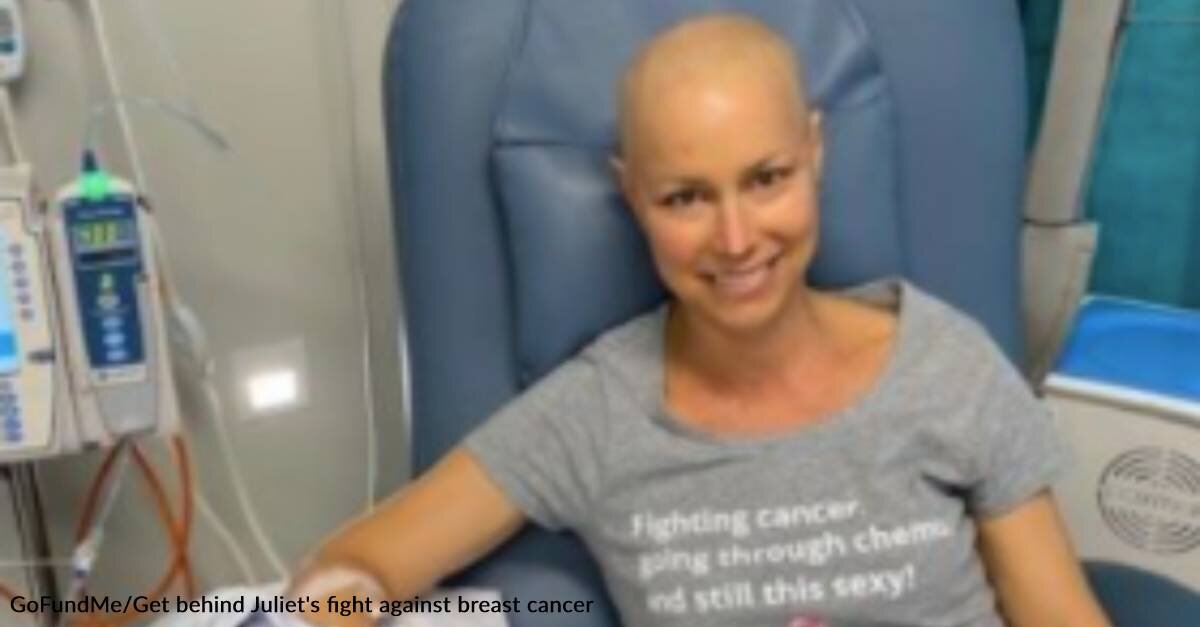 Juliet Wilson is currently undergoing the fight of her life against stage III breast cancer. She’s doing chemotherapy treatments and is set to have a double mastectomy and lymph node removal in August. But one of the most important people in her life may not be able to be there in person to support her during this terribly difficult time due to lingering COVID-19 restrictions.

Juliet lives in Melbourne, and her new husband, David Macneill, lives on the east coast of Canada, where he cares for his elderly mother. The couple got married on May 31st via a legally recognized virtual ceremony because they were not able to be together in person due to COVID-19-related travel restrictions.

“It’s bad enough she went through the chemo alone, and I was OK knowing that I would be there for her surgery,” David says. “[But] me not being there to help her, I can’t get my head around it. It just doesn’t make sense to me that I’m not allowed to go take care of the woman I love.”

Since taking their vows, the couple has applied four separate times for David to be able to travel to Australia to join his wife and take care of her during her recovery from breast cancer surgery. Each application, however, has been rejected.

“Given the personal nature of the care that I require and what I’m going to be confronting, [it’s] not only the physical toll, but the emotional toll of having a double mastectomy and continuing to battle my cancer,” says Juliet. “David is the love of my life. He’s a beautiful human being. He’s my partner, my soul mate, my confidante, my rock.”

David’s plan was to fly to Australia on July 12th so that he could quarantine for two weeks in a hotel prior to Juliet’s surgery in August. Then he planned to stay for three months while Juliet recovered. But so far, it looks like Juliet may be forced to go it alone.

Australia’s borders remain officially closed more than a year after the start of the COVID-19 pandemic, although some people have been able to get special permission to enter despite the strict rules. Recently, caps on the number of travelers allowed into the country have been halved due to outbreaks in areas around the country.

David is fully vaccinated against the COVID-19 virus and has provided all the required documentation for the trip. He says he cannot imagine not being allowed to support his wife in person after her surgery.

“It’s eating me up inside not having an answer,” he says. “I’m praying I get to leave on [July] 12 because I can’t imagine Juliet doing this without me.”

Juliet says that, despite the fact that her husband currently lives on the other side of the globe, the pair share a joint bank account and have a future planned together.

“If David’s not allowed to come, I simply do not have anyone who can provide the care that I need,” she says. “I love Australia and think of us as a compassionate country, but I don’t feel my own country is being compassionate towards me right now, and that breaks my heart.”

The Australian Border Force (ABF) says that immediate family members are supposed to be exempt from travel restrictions. And, according to Victorian Health Minister Martin Foley, the caps on the number of arrivals to the country do allow for people to return on compassionate grounds or under compelling circumstances. However, it doesn’t seem to be working out for Juliet and David, as the ABF has concerns about the legality of their marriage.

“We’re faced with a really hard choice: Do we lock everyone down or do we lock a few people out,” Foley says. “As tough as that decision is, there are still ways and means of resolving particular humanitarian crisis cases.”

After Juliet’s surgery, she will still have to endure five weeks of radiotherapy to complete her treatment. It remains to be seen whether her husband will be able to join her for any of the difficult times she’ll be facing in the near future.

“My hope is it will reach the right ears and people will realise it’s a valid and genuine application and these are really critical circumstances that I’m facing and to help us. And to help me get the support that I need,” says Juliet.

There is currently a petition garnering signatures to help David get permission to fly to Australia. There is also a GoFundMe page set up to help offset the cost of Juliet’s treatment.

FDA Approves Bylvay (odevixibat) for the Treatment of Pruritus in Patients with Progressive Familial Intrahepatic Cholestasis (PFIC)
Lilly and Banner Alzheimer’s Institute Collaborate on Planned Phase 3 Prevention Trial of Donanemab
Covid cases are rising again in all 50 states across U.S. as delta variant tightens its grip
‘Going to Watch Our Feet and Ask if We Moved’: What We Heard This Week
COVID: Study Finds Lower Antibody Activity Against Delta Variant At Single Dose – But Vaccines Still Work