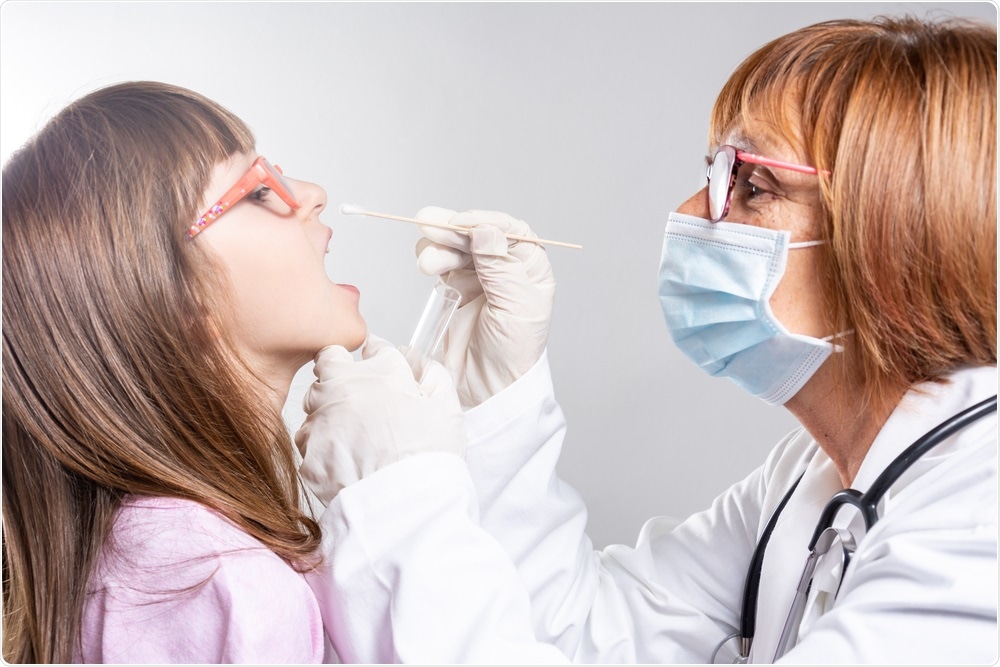 The coronavirus disease 2019 (COVID-19), which is caused by the severe acute respiratory syndrome coronavirus 2 (SARS-CoV-2), has spread to almost every country around the world, causing death and economic devastation in its wake. Although children have been relatively spared from the severe effects of this disease, they can still acquire and transmit SARS-CoV-2 to others.

The detection of SARS-CoV-2 in children is therefore a priority, with over two million pediatric cases of COVID-19 that have been identified in the United States alone. A recent study published on the preprint server medRxiv* finds that antigen-based testing can reliably identify children who are infectious for SARS-CoV-2, despite the fact that this diagnostic approach is considered to be less sensitive than the gold standard reverse transcriptase-polymerase chain reaction (RT-PCR) test.

Antigen-based tests are preferred for community testing and screening programs because they are cost-effective, can quickly provide test results, and are suitable in low-resource settings. These tests are based on the detection of a specific antigen and can be used on either nasal swabs or nasopharyngeal specimens, irrespective of the individual’s age.

These antigen-based tests are most sensitive when the viral load is high and, in most cases when the cultivable virus can be retrieved from the sample. In symptomatic adults, positive antigen tests are highly correlated with positive RT-PCR tests. This is, however, not the case with asymptomatic adults or if testing is delayed for more than seven days from the onset of symptoms.

There remains a lack of information on the accuracy of antigen-based tests when used in children, particularly when comparing their efficiency in symptomatic versus asymptomatic patients. As a result, the current study focused on children who were tested at a community testing site to compare the results of antigen testing with RT-PCR results and viral isolate measurements. This three-fold comparison was useful in revealing the infectivity of children with a positive antigen test, as well as the reliability of the test in detecting infection when compared with the RT-PCR approach for this population.

What were the findings of the study?

The study found that out of the 2,110 samples that were included in the study, almost 50% of those were from children who had previously been exposed to COVID-19 in the past 14 days. In fact, the rate of exposure in children between the ages of 16 and 17 was 60%, which was significantly higher as compared to the adults who were included in this study.

As compared to adults, a greater amount of children who were included in this study reported symptoms, though most of them only reported one symptom. For those who were symptomatic, samples were obtained at a median of two and three days from the onset of the symptoms in children and adults, respectively. 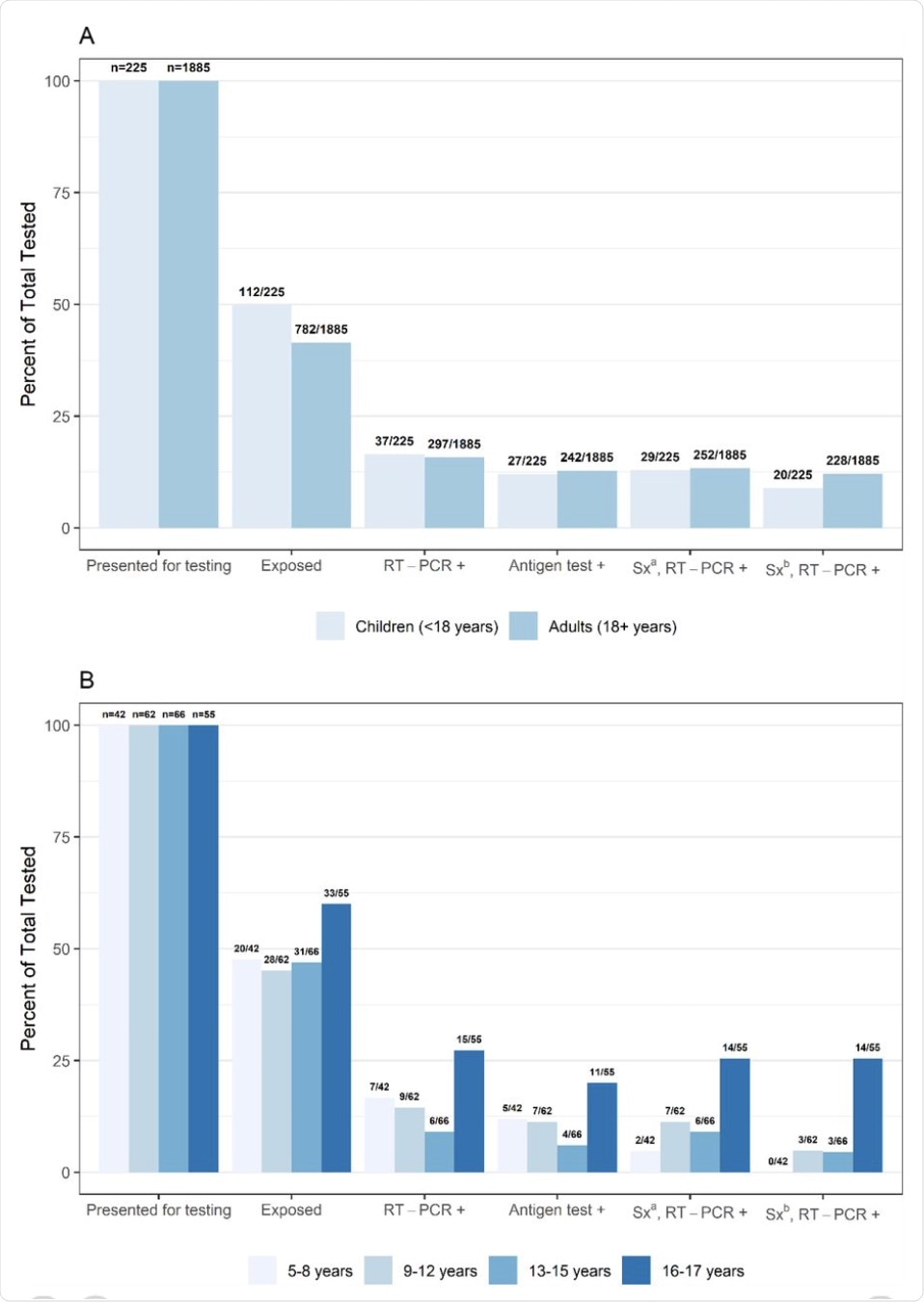 a Sx: Symptomatic defined as reporting ≥1 symptom at specimen collection

b Sx: Symptomatic defined as reporting symptoms meeting the Council of State and Territorial Epidemiologists (CSTE) clinical criteria for COVID-19

Antigen tests were positive in 12.8% and 12% of adults and children, respectively, in the screening program, with 82% concordance between antigen and RT-PCR test results. However, the sensitivity of the antigen-based test was slightly lower among children, with a concordance of 73% in this patient population.

A positive antigen test was completely accurate as a marker of infection in children, whether symptomatic or asymptomatic when they had a history of exposure. Conversely, a negative test correlated with the absence of infection in 95% of cases.

Among the samples of symptomatic children that were positive upon the subsequent RT-PCR tests but were originally deemed negative by antigen-based tests, 86% of the RT-PCR tests were taken within a week of symptom onset. This group of samples showed higher Ct values as compared to when the antigen tests were positive, and none of them yielded cultivable viruses.

Over half of the pediatric samples that were tested positive via RT-PCR yielded infectious virus particles, which was comparable to about 60% of samples in the adult group. Exposure to a known COVID-19 case, or the presence of symptoms, did not predict the proportion of samples with infectious virus.

This again is different from the scenario in adults, in which symptomatic adults were much more likely to yield infectious virus, as well as those samples that were taken within 7 days of symptom onset.

Virus isolation was successful in 70% of pediatric samples when both tests were positive; however, this was not true for samples that tested negative by the antigen-based test. Notably, about 75% of viral particle recoveries were obtained from symptomatic children, with only a fifth originating from asymptomatic children.

What were the implications?

Overall, any sample that was successfully used for virus isolation tested positive by both RT-PCR and antigen-based testing. These results corroborate earlier studies showing that a history of exposure is associated with higher test sensitivity. The likelihood of this correlation increases in older teens with higher exposure rates, with almost all RT-PCR-positive results in this age group reporting symptoms.

“Testing pediatric populations, particularly teenagers, with any symptoms or possible exposures is important due to their high levels of exposure and risk of community transmission. Confirmatory nucleic acid amplification testing is recommended for a negative antigen result in individuals with symptoms or known exposures.”