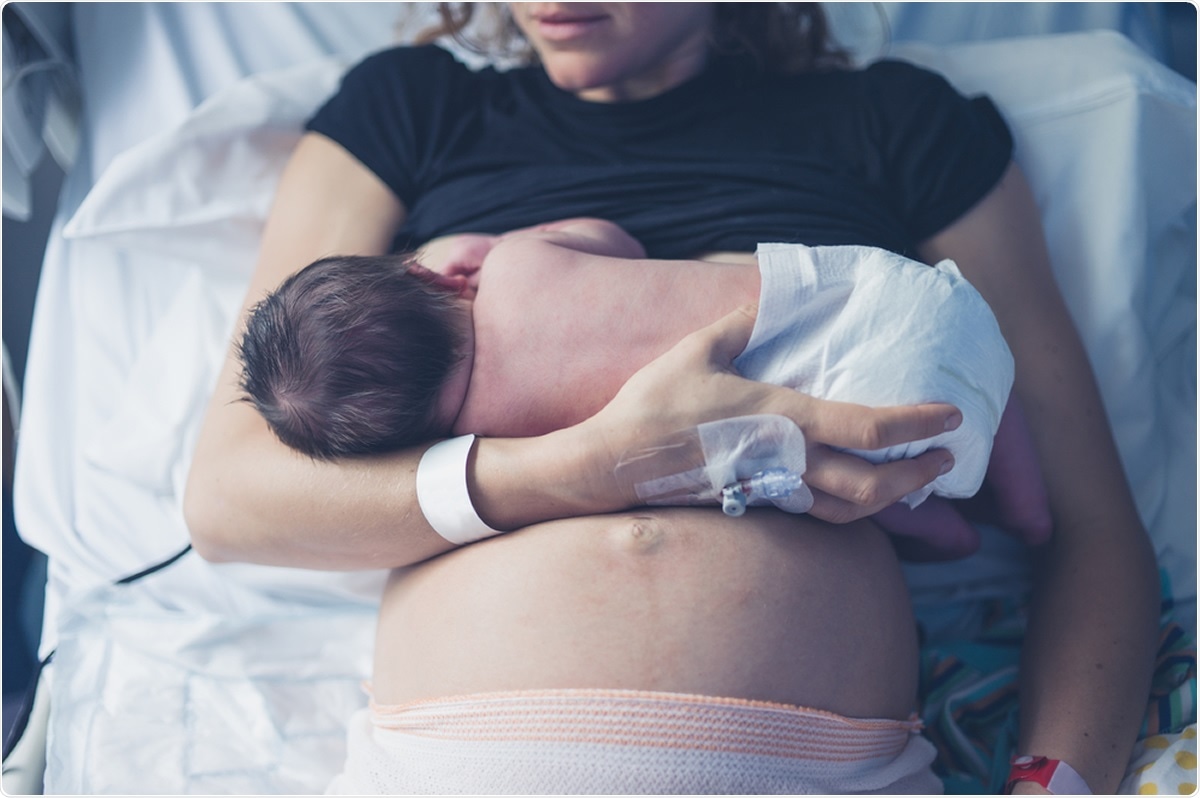 Human breastmilk has been found to be one of the best sources of nutrition for infant health and development while also aiding the maturation of the immune system. This is significant as when a pregnant mother experiences an infection, her antibody response can be transferred to the milk, with specific antibodies reportedly being found in milk. Due to the exclusion of pregnant women from initial clinical trials of severe acute respiratory syndrome coronavirus 2 (SARS-CoV-2) vaccines, there are limited data on the effects of vaccination on breastfeeding women.

This has given rise to a longitudinal study based in Spain observed 75 lactating women receiving SARS-CoV-2 vaccinations. The aim of this study investigates the impact of different types of vaccines on the anti-SARS-CoV-2 Immunoglobulin A (IgA) and Immunoglobulin G (IgG) antibody levels found in human milk. A pre-print version of the observational study is available on the medRxiv* server, while the article undergoes peer review.

The vaccination program in Europe was initiated on December 27, 2020, with healthcare workers and breastfeeding women being the priority for vaccinations in Spain. Messenger RNA (mRNA)-based vaccines were the first type available, with preliminary studies showing these vaccines inducing anti-SARS-CoV-2 antibodies in human breast milk.

IgG antibodies are found the most in the blood, contributing to approximately 75% of the total amount of antibodies found in the body. A few actions that these antibodies can be involved in, includes the initiation of phagocytosis of viral cells through the involvement of macrophages as well as activating natural killer cells for cell-mediated cytotoxicity. IgG antibodies have the ability to cross the placental barrier and can help pass passive immunity to newborns immediately following birth, which can be helpful in the case of COVID-19 if the mother was vaccinated.

IgA antibodies are also involved in antiviral responses when found in mucosal surfaces such as the gut or the lungs. Along with IgG antibodies, IgA antibodies are involved in the agglutination of antigens which lead to phagocytosis via macrophages. IgA is one of the most important immunoglobulins found in breast milk due to babies being born with low levels of IgA, and breastfeeding infants can be aided with a boost in their immune system, with breast milk helping to prevent systemic infections by potential pathogens or even the coronavirus

The researchers investigated whether maternal immunization using mRNA-based vaccines impacted the antibody secretion against COVID-19 in breast milk and any following adverse side effects on women and their children.

They studied human milk, which was collected at seven time points from women with confirmed SARS-CoV-2 infection as well as a group of women with natural immunity.

The participants who were involved in the study received either two doses of mRNA vaccines, including BNT162b2 mRNA, BioNTech/Pfizer, and mRNA-1273, Moderna, or one dose of an adenovirus-vectored vaccine, such as ChAdOx1 nCoV-19, Oxford/AstraZeneca. The study consisted of pre-vaccination samples and samples from time-points after one dose as well as the second dose.

Antibodies against the receptor-binding domain of the SARS-CoV-2 protein were determined with the vaccinated mothers and COVID-19 positive mothers being chosen for IgG and IgA, respectively

The Spanish study found that there were no significant differences found between the different types of vaccines provided. However, those given the adenoviral-vectored vaccine reportedly experienced more side effects such as a fever or a headache compared to the mRNA-based vaccines. 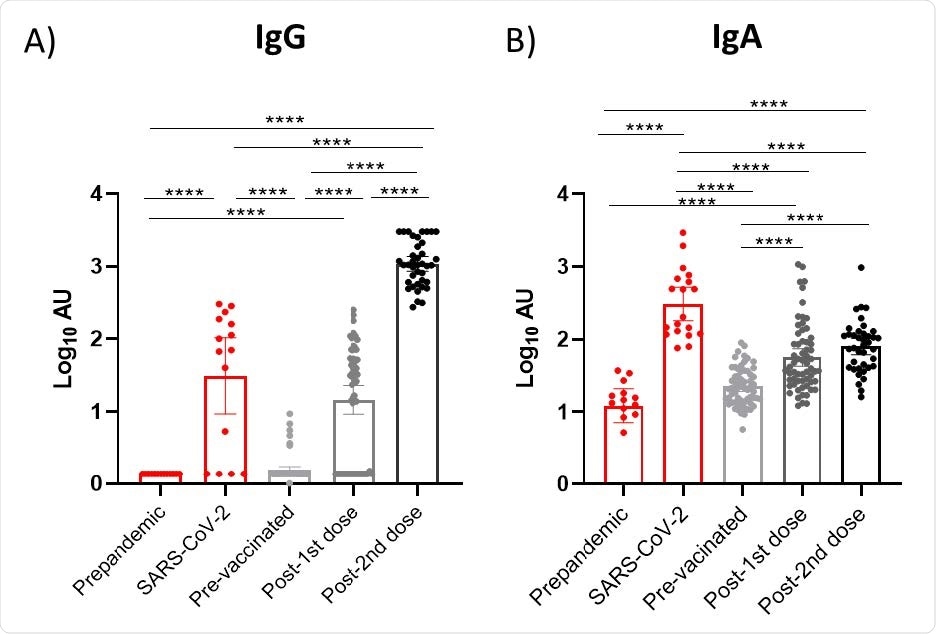 Effect of vaccination on IgG and IgA presence in breast milk. Results of IgG (A) and IgA 4 (B) levels of the three available vaccines in Spain were grouped according to the post-vaccination days. Time points shown in the figure are as following: Post-1 st dose (2 weeks after 1st 5 dose of the three studied vaccines), post- 2 nd dose (2 week after 2nd 6 dose of the mRNA-based vaccines). One-way ANOVA with a Tukey’s post-hoc test for multiple comparisons was performed to assess the statistical significance between groups. Data is presented as mean and 95% of CI of the log-transformed arbitrary units (AU). * p<0.05, ** p<0.01, *** p<0.001, **** p<0.0001.

The findings also consisted of increased IgG and IgA levels after vaccinations as well as 8 participants with COVID-19 infection prior to being vaccinated, showing higher antibody levels. The BioNtech/Pfizer and Moderna vaccines have been shown to induce higher IgG levels than Oxford/AstraZeneca after the first dose was administered. The maximum effect seen for mRNA-based vaccines was two weeks after the second dose. 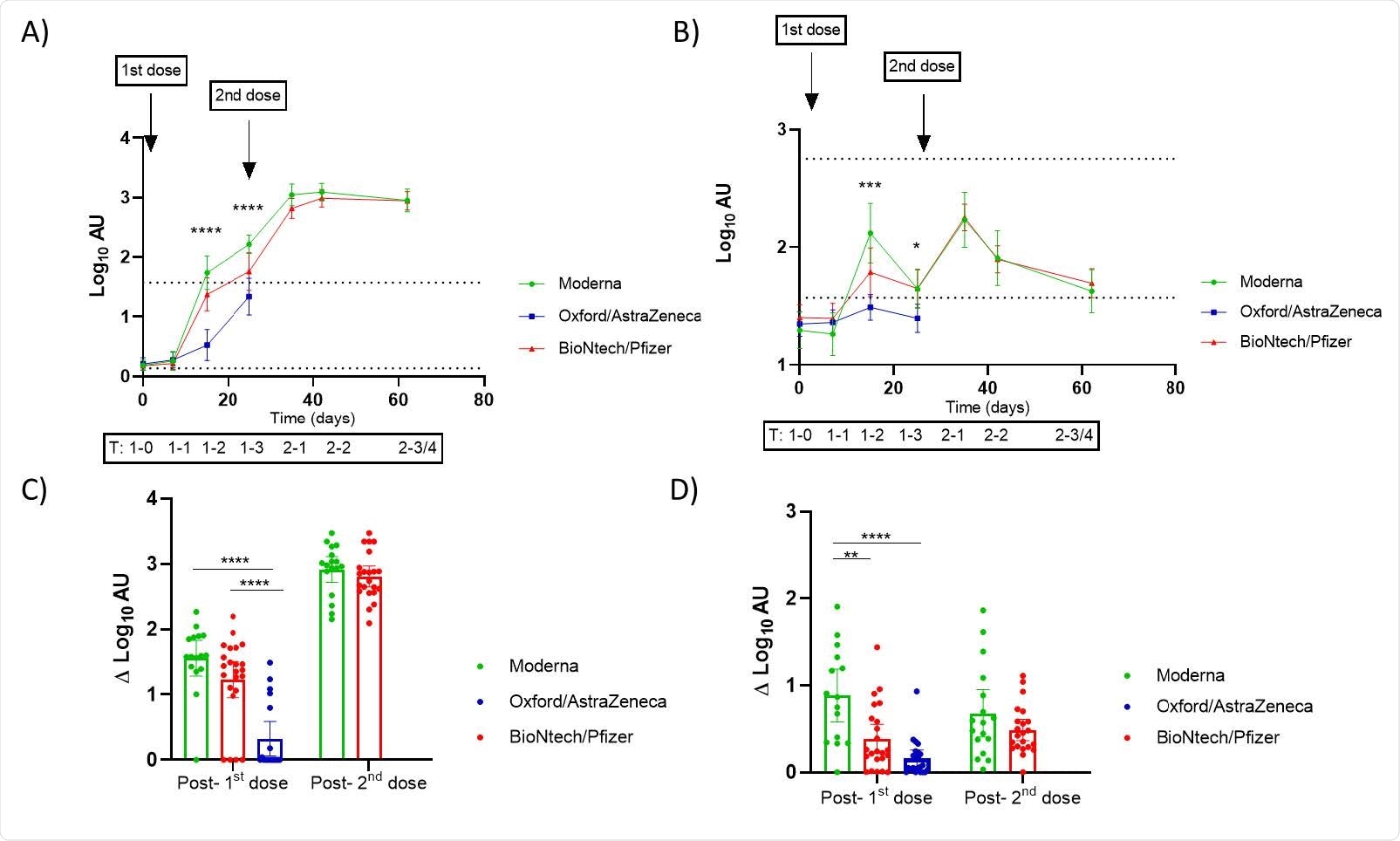 Effect of vaccination on IgG and IgA found in breast milk according to the administered vaccines in Spain. A, B) Trajectories of the anti-SARS-CoV-2 IgG (A) and IgA (B) in breast milk samples according to vaccine from baseline (before the 1 st dose) to 3-4 weeks post vaccination course. For the adenovirus-vectored vaccine (Oxford/AstraZeneca) only the period up to 3 weeks following the 1 st dose was analyzed. The upper dotted line in the plots of trajectories represent the mean of the log transformed arbitrary units (AU) for mothers confirmed of SARS-CoV-2 infection. The lower dotted lines in the trajectories plot represent the established positive cut-off value (log of the mean+2SD of prepandemic anti-SARS-CoV-2 IgA and IgG AU). Mixed-effect analysis with multiple comparisons post-hoc test was performed to test the significance in the antibody’s presence in breast milk and the differences according to vaccines. Y- axis marked the approximated days of sampling and the code of the timing as following: pre-vaccination (1-T0: 0 days), 1 week (1-T1), 2 weeks (1-T2) and 3 weeks (1-T3) post the 1st dose of vaccine; and 1 week (2-T1), 2 weeks (2-T2) and 3-4 weeks (2-T3/4) post 2nd dose. Comparison of the increment in log-transformed AU from the determination of SARS-CoV-2 IgG (C) and IgA (D) from baseline to 2 weeks post 1st dose and 2nd dose. One-way ANOVA with a Tukey’s post-hoc test for multiple comparisons was performed to assess the statistical significance of the differences in the antibody detection. Data is presented as mean and 95% of CI of the log-transformed arbitrary units (AU). * p<0.05, ** p<0.01, *** p<0.001, **** p<0.0001.

Although the results of the study were overall positive, providing preliminary data for vaccinated breastfeeding mothers, more extensive sample studies are required for the results to be representative and for the safety of COVID-19 vaccinations to be confirmed as being safe for this population group. The follow-up of antibody levels is also important as it would determine the length of time of that vaccine-induced antibodies within breast milk last.

This study investigated whether vaccinations for breastfeeding women impacted the antibody levels within the milk produced by mothers, with possible significant anti-SARS-CoV-2 antibody levels being found. While the results may not be representative of all lactating women, it concluded that vaccinations produced higher levels of IgG and IgA antibodies within breast milk, which could then be transmitted to infants, increasing their natural immunity to COVID-19.