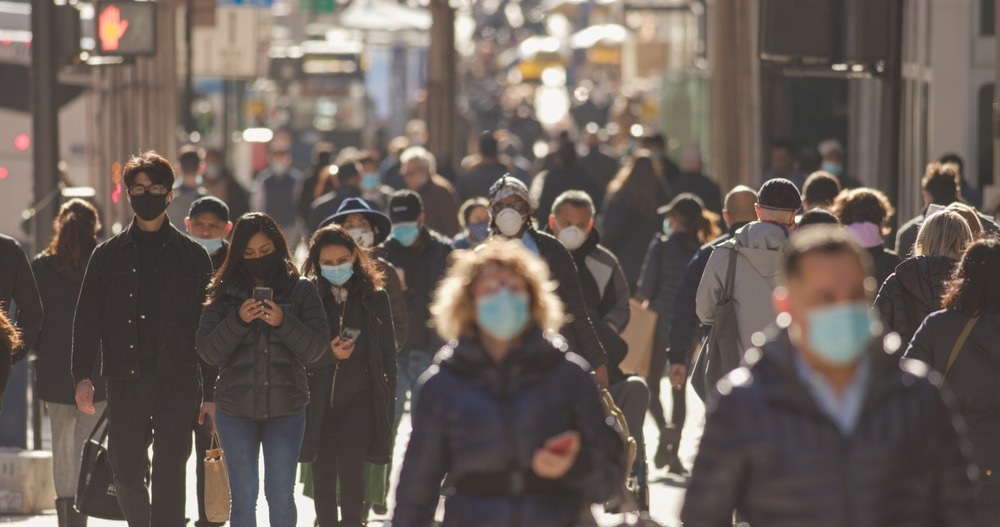 Previous studies have reported age-related differences in coronavirus disease 2019 (COVID-19) tolerance and responsiveness, with younger individuals tending to have better outcomes than the elderly. In addition, age-targeted COVID-19 mitigation strategies have been reported to considerably decrease intensive care unit (ICU) admissions and deaths.

In the present study, researchers performed compartmental susceptible-infected-recovered-dead-vaccinated-virulence (SIRDV) modeling to predict age-stratified differences in COVID-19 severity outcomes among children aged 12 to 17 years, adults aged 18 to 64 years, and seniors over the age of 65 years, considering SARS-CoV-2 mutations, reinfections, and vaccinations.

For simulating the intra- and inter-age group interactions, this model used SARS-CoV-2 infections brought about by virulence inferred from population balance equations. First, the model was fitted to SARS-CoV-2 infection cases, deaths, and vaccinations between January 2021 and July 2021. Subsequently, the model was utilized for COVID-19 predictions from August 2021 onward.

The team performed four different simulations. First, how the association of increased SARS-CoV-2 transmission rates and vaccine inefficacy with the SARS-CoV-2 Delta, a variant of concern (VOC), can alter COVID-19 dynamics was determined. 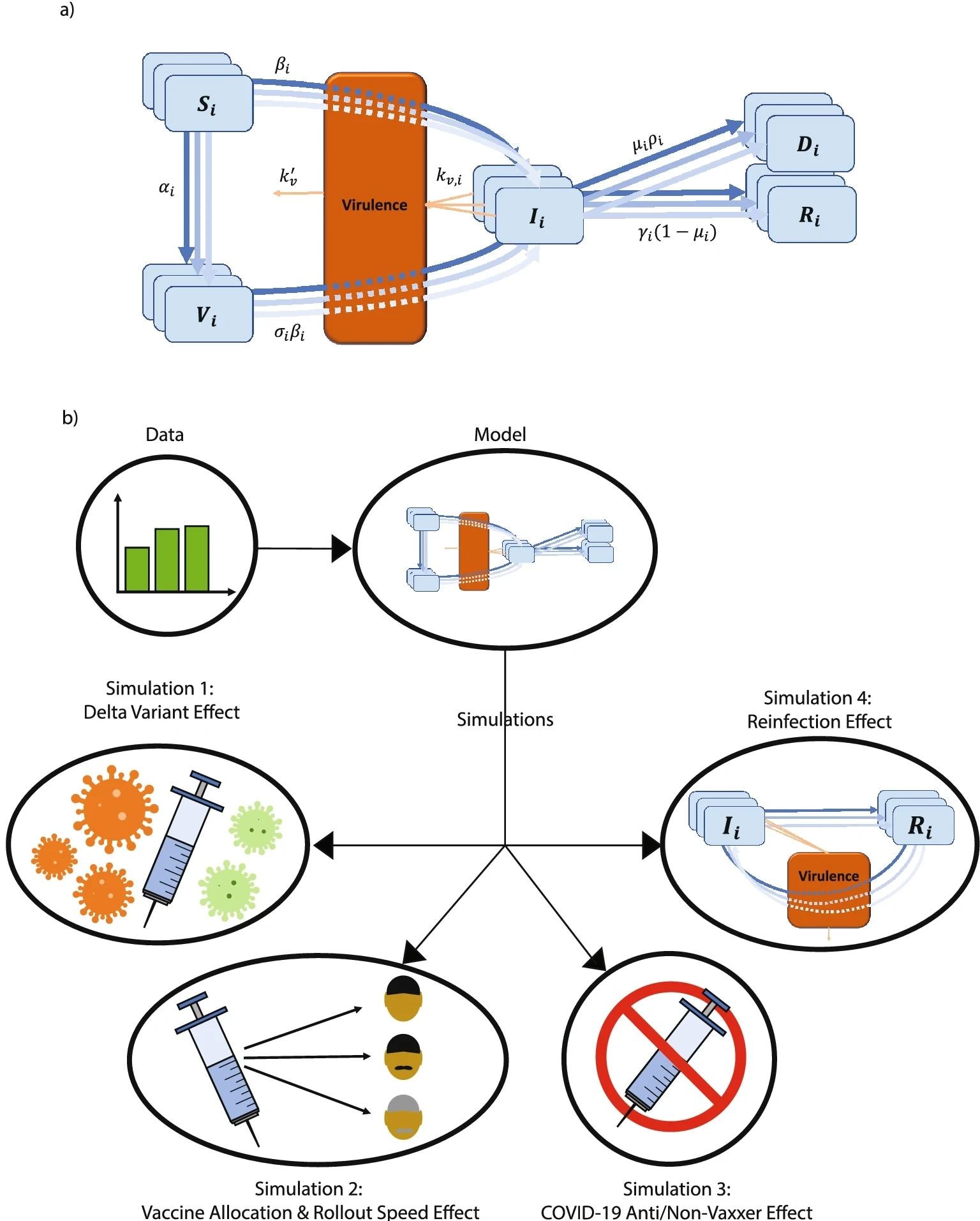 A schematic of the SIRDV-Virulence (Susceptible-Infected-Recovered-Dead-Vaccinated -Virulence) model and overall process of the study. (a) An SIRDV-Virulence model (Susceptible-Infected-Recovered-Dead-Vaccinated-Virulence) to predict the transmission of COVID-19 in the United States, in which the members of three age groups (children, adults, and seniors) move to compartments (blue) at rates influenced by the parameters adjacent to the inter-compartmental arrows (blue). Infected members of each age group contribute to the growth of a single virulence parameter (orange), which can infect both susceptible, SiSi, and vaccinated, ViVi, individuals. (b) Data is fed to the compartmental model to fit its parameters and used to run simulations to predict future scenarios: (1) the effect of the Delta variant, (2) the effect of changing the vaccination allocation and roll-out speed, (3) the effect of the proportion of COVID-19 Anti/Non-Vaxxers, and (4) the effect of reinfection.

Second, the effect of altering the speed of vaccine rollout and coverage was assessed to determine the most optimum vaccine coverage strategy for reducing SARS-CoV-2 infections and associated deaths.

Third, the researchers studied the effect of altering the percentages of anti-vaxxers/non-vaxxers among U.S. citizens. Fourth, the impact of including reinfections on the model estimations was estimated.

Seniors and adults were vaccinated during the first and second periods, whereas children had not received COVID-19 vaccinations. Therefore, the third period was considered between May 8, 2021, and June 12, 2021, during which the Alpha and Delta VOCs were predominant, and individuals of all ages were vaccinated.

The fourth period was between June 12, 2021, and July 31, 2021, during which the rates of COVID-19 vaccinations were more significant among children than seniors and adults. Heat maps were compared to assess vaccination prioritization by age.

The long-term effects of individuals unable or unwilling to receive COVID-19 vaccination(s) were evaluated using the pro-vaxxer-anti-vaxxer-infected-recovered-dead-vaccinated-virulence (PAIRDV-virulence).

A moderate reduction in new COVID-19 cases and associated deaths were observed during the third period. However, the percentage of Delta variant infections increased during the fourth period.

The relative SARS-CoV-2 transmission rate decreased across ages during the first three periods. However, Delta VOC predominance in the fourth period led to a sudden elevation in transmission rates.

During the first and second periods, vaccinations were higher among seniors. However, adults and children were vaccinated more during the third and fourth periods than seniors.

The time to infect individual times the death rate increased during Delta dominance. The future total SARS-CoV-2 infections and associated deaths, as well as the total fraction of COVID-19 vaccinees, was more dependent upon adults and children than on seniors.

An increase in the susceptible population that would not be vaccinated was predicted to increase COVID-19 cases and associated deaths across ages. In addition, the fraction of anti-vaxxers affected adults and children more than seniors.

An increase in the value of the reinfection parameter accounting for the proportion of recovered individuals who could be reinfected was predicted to increase the number of active SARS-CoV-2 infections and deaths. However, the increase in fatalities was less significant.

For an unaltered rate of SARS-CoV-2 transmission and unaltered vaccine efficacy (maintaining the fourth-period values), active SARS-CoV-2 infections were estimated to peak in October 2021. In the worst-case scenario, with the rate of SARS-CoV-2 transmission doubled, the number of active SARS-CoV-2 infections was estimated to peak to almost double in December 2021. In the worst-case scenario, there would be a slight non-significant increase in the total number of COVID-19 deaths.

The current study provided estimates of SARS-CoV-2 infection dynamics from August 2021 onward, as well as the peak time of infection and magnitude for different scenarios, which could aid in improving the global preparedness of healthcare systems. In addition, the simulation results indicated that the optimum vaccination strategy is to prioritize children and adults, whose dynamics were shown to be more sensitive to vaccinations than seniors.