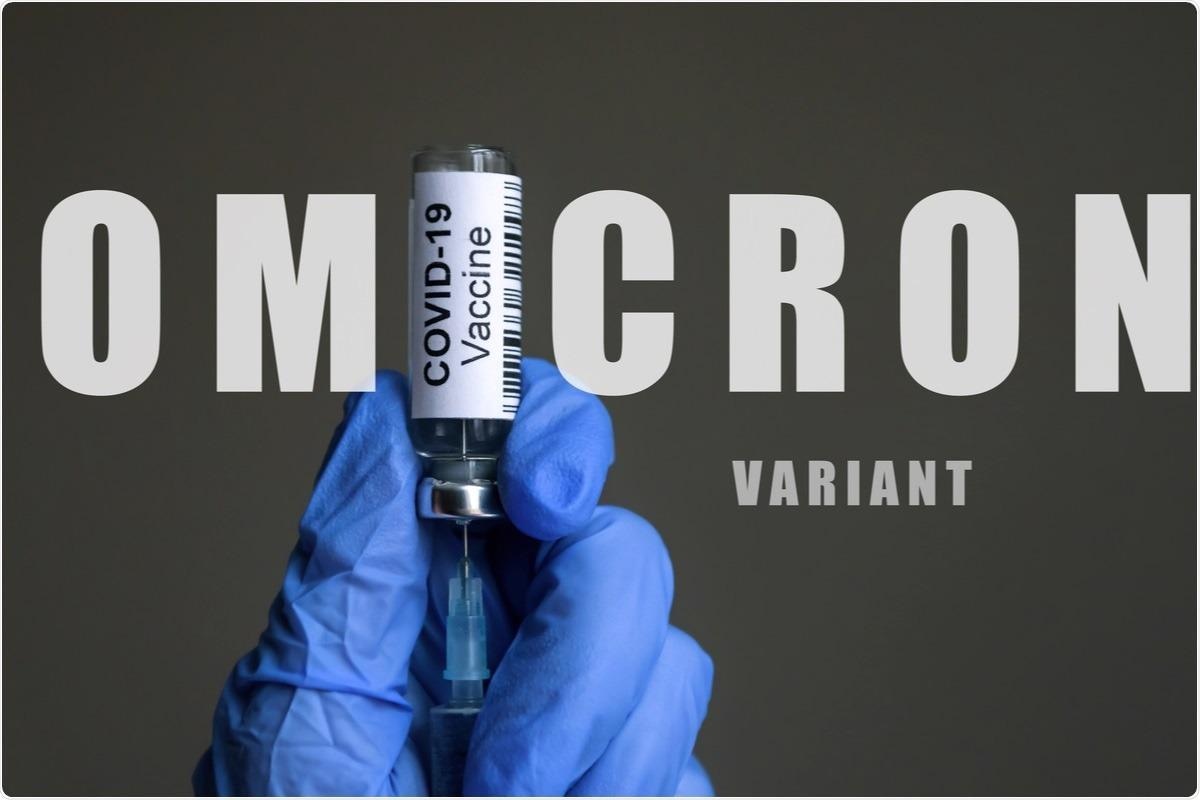 The severe acute respiratory syndrome coronavirus 2 (SARS-CoV-2) has caused worldwide morbidity, mortality, and social and economic disruptions of the first order. Despite the rollout of vaccines, the emergence of new immune escape variants poses a formidable obstacle to ending the pandemic.

The newest such variant is the Omicron variant (B.1.1.529). First reported on November 24, 2021, it has displayed a tremendous capacity to spread extensively and rapidly, beyond all earlier variants, while also resisting neutralization by antibodies elicited by the vaccine or by natural infection with earlier variants, including the Delta variant.

It has become dominant in many countries and threatens to cause the next wave of infection. A new preprint research paper reports on the state of current knowledge as to the immune evasion capability of this variant, linking it to the type of vaccine used and the vaccination protocol.

The research is based on the many reports produced by multiple groups using the sets of vaccinated and convalescent serum on hand. These include sera from individuals infected by wild-type, Alpha, Beta, and Delta variants, using multiple neutralization assays and cell types.

Published on the bioRxiv* preprint site, the research aggregates data from 23 laboratories up to December 22, 2021, to understand the propensity of Omicron to escape antibody-mediated neutralization.

What Did the Study Show?

In the first group, dubbed “2x-Vax”, all 44 individuals were fully vaccinated, independent of vaccine type. This group shows the most significant uncertainty about the degree of antibody escape against Omicron compared to wild-type. Thus, the titer drops about 19-fold, on average, but this is likely to be significantly less than the actual drop.

The reason is that many Omicron neutralization titers were below the limit of detection (LOD) of the assay, and sometimes the low titers against the reference antigen were to blame for low fold drops <2, as, for instance, in recently vaccinated individuals who had received the single-dose J&J vaccine. 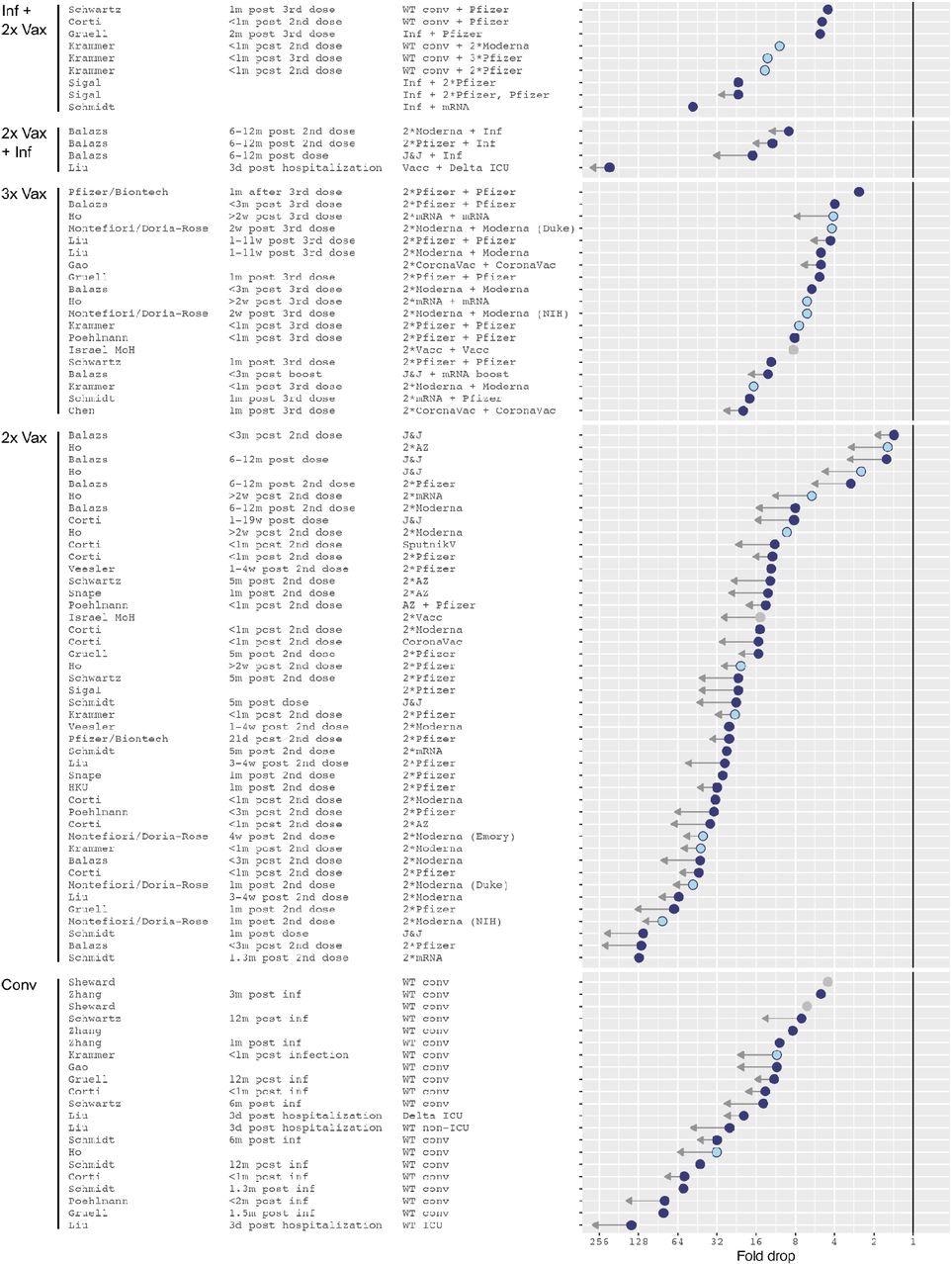 Omicron fold drops relative to wild type. Arrows indicate uncertainties in the point estimate due to titers below the limit of detection (LOD) of the assay. A short arrow marks measurements with less than half of Omicron titers below the assay’s limit of detection (LOD), or conversely reference antigen titers at or higher than the LOD. Long arrows mark measurements with more than approximately 80% of Omicron titers below the LOD. Light blue dots show NIH SAVE laboratories, gray dots mark data points for which the reference antigen was not stated in the manuscript and is here assumed to be Wu-1. The solid vertical line marks no fold change.

In the “2x Vax + Inf” group of individuals who were vaccinated fully and then had breakthrough infections, a similar pattern was seen. The largest fold drop with respect to the wild-type variant was 25-fold, but these were from individuals who had Delta infection and were sampled three days after hospitalization.

Among the group of convalescents, the 20-fold mean drop in fold titers for Omicron compared to the wild-type virus was the second-largest drop. However, this was primarily due to a large reduction in sera from individuals sampled just three days after hospitalization with a wild-type variant.

Among the “Inf + 2 x Vax” cohort, comprising individuals who were fully vaccinated after being infected, the extent of fold drop for Omicron most closely resembled that in the triple-vaccinated cohort. Most Omicron neutralizing titers were above the LOD, with the average being a 12-fold drop.

The triple vaccination group, who had received an additional booster dose, almost all had detectable Omicron neutralization titers, with lower fold drops, at a 7-fold reduction compared to the wild-type. They also showed a tighter range of distributions compared to those who had completed only the primary series of vaccinations.

Most of the samples were taken within a month of the additional dose, which mandates longer follow-up to determine the temporal course of these titers. The greatest degree of certainty was with the use of messenger ribonucleic acid (mRNA) vaccines and with those infected prior to double vaccination with these vaccines.

Interestingly, the fold drop with Omicron compared to the wild-type does not bear any correlation to the absolute magnitude of the neutralizing titers against the latter, indicating that there is a real improvement in immunity following the administration of an additional dose of the vaccine.

The highest neutralizing titers for both Omicron and wild-type were reported in the Infected+vaccinated group, though the former was less than a tenth of the latter (460 and 5,600, respectively). In the triple-vaccinated group, the titers were, on average, 40% and 70% of those in the above cohort (Omicron and wild-type = 2,200 and 330, respectively). In both cohorts, most Omicron neutralizing titers were above the LOD, indicating these values are accurate.

With the other groups, the large number of Omicron titers below the assay LOD increases the degree of uncertainty of the estimates and the mean titers, indicating that the reported mean Omicron titer is probably a substantial overestimate. In comparison, the wild-type titers were easily detectable and were >1,500.

The double-vaccinated cohort showed lower titers with the single-dose J&J, or the double Sputnik V, compared to two doses of the AstraZeneca vaccine, and much lower than the mRNA vaccine sera.

Pseudovirus neutralization titers were used as a proxy for protection against symptomatic disease. This showed the Inf+2x Vax group was estimated to have >80% protection, with two doses of AstraZeneca or Moderna vaccines. The Omicron titers, though lower, would still provide 70% protection.

In the triple vaccinated group, either vaccine would give >80% protection against both variants at one month from the third dose. There would be 70% protection against Omicron-related symptomatic disease with all vaccines, except for the CoronaVac, even with three doses. The estimates of protection were not performed in other groups because of the large uncertainties involved and the fact that vaccine efficacies against Omicron are not yet established.

Pseudovirus assays had wild-type vs. Omicron titers that were twice as high as with live-virus assays in the 2x Vax cohort and three times higher in the triple-vaccinated group.

What Are the Implications?

The data provided here led the scientists to conclude that double vaccination or a history of infection led to a 19-fold reduction in titers against Omicron. The additional vaccine dose, or breakthrough infection after two doses, led to a much lower reduction at 7-fold.

The question as to how long this will persist is unanswered since all samples in the triple-vaccinated group were taken a month from the last dose.

Yet, “the substantially lower fold drop and somewhat higher titers after a third vaccination are strong early evidence for the utility of booster vaccination at increasing virus neutralization titers against Omicron, and thus potentially at increasing vaccine efficacy.”

Secondly, the difference in reported neutralization titers depending on whether pseudovirus or live-virus assays were used should be investigated, as it could possibly be due to the use of different types of sera with different assays. For instance, most pseudovirus assays were done using sera from individuals who had received the mRNA vaccines, but live virus assays with sera following J&J, Sputnik V and CoronaVac vaccination.

The latter are known to induce lower neutralizing titers compared to mRNA vaccines. However, vaccine efficacy is lower at higher titers with AstraZeneca with live virus assays compared to pseudovirus assays.