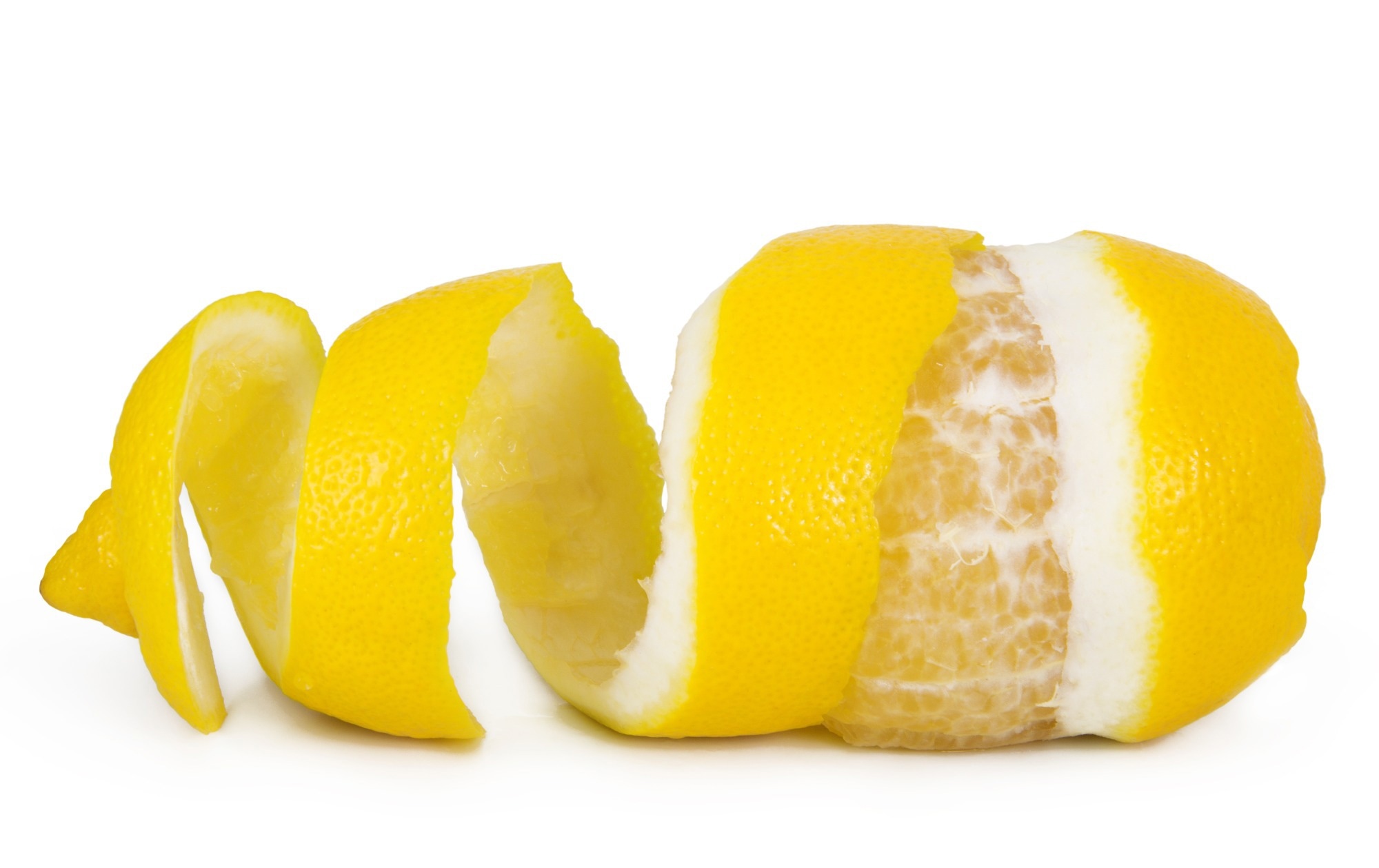 A diet containing fruits and vegetables contains pectins (plant polysaccharides). Pectin cannot be metabolized by mammalian cells in the gastrointestinal tract but is fermented by the gut microbiota in the colon, where short-chain fatty acids (SCFAs) are released. Previous studies have examined pectin’s prebiotic properties. However, the results have been inconsistent, most likely because of differences in its chemical structure, which varies with its molecular weight and degree of esterification.

The Role of Gut Microbiome in Pectin Fermentation

The gut microbiome contains a complex bacterial population that plays a vital role in human health. The gut microbiome protects hosts from pathogenic colonization through physical and nutrient competition. Furthermore, they synthesize vitamins and produce a wide range of metabolites, such as short-chain fatty acids (SCFA), which can alter the immune system.

Gut microbiota can ferment pectin because of the presence of bacterial species that carry polysaccharide utilization loci (PULs) and produce carbohydrate-active enzymes. These enzymes can break down pectin molecules and allow pectin to be used as a carbon source that subsequently ends in the production of SCFAs.

The key pectin-degrading bacteria has been identified to be Bacteroides species (e.g., Bacteroides thetaiotamicron). Furthermore, species belonging to Lachnospiraceae family also contain pectin-degrading enzymes, such as hydrolases, lyases, and esterases. Some other microbes that are associated with pectin fermentation are Faecalbacterium prausnitzii and Eubacterium eligens.

Pectin fermentation by gut microbiota depends on the chemical properties of the pectin, particularly DE and MW. Pectin with lower MW has a higher fermentation rate and elevated SCFA yield. Previous in vitro studies based on citrus pectin and sugar beet pectin indicated DE to be the most crucial parameter for pectin modification of the gut microbiota. These studies have indicated that MW and DE of pectin influence its fermentability by the gut microbiota and affect its prebiotic potential. Hence, it is imperative to elucidate how these structural components of pectin affect gut microbiota composition.

How do MW and DE Affect the Prebiotic Function of Lemon Pectin on the Gut Microbiota?

A new Foods journal study has evaluated how MW and DE affect the prebiotic function of lemon pectin on the gut microbiota. An in vitro experimental design was used to understand the interactions between pectin and gut microbes. This experimental design successfully eliminated the multifarious interactions that occur between mammalian cells and gut microbiota in in vivo animal models. 16S rRNA gene sequencing and SCFA analysis were used to determine the alterations in gut microbiota community structure and function.

Interestingly, it was observed that HMW-LDE elevated taxa within Lachnospiraceae in both donors. The finding of this study is in line with previous studies that reported elevated Lachnospiraceae following pectin treatment. For LMW-HDE lemon pectin, changes in the levels of Paraprevotella, Acidaminococcus, Psuedoramibacter, Alistipes, and Fusobacterium were found.

Weighted and unweighted UniFrac analyses revealed that the most significant divergence for both LMW-HDE and HMW-LDE lemon pectins was due to donor composition and not pectin treatment. Nevertheless, no significant change in the microbial community was observed within the donor. 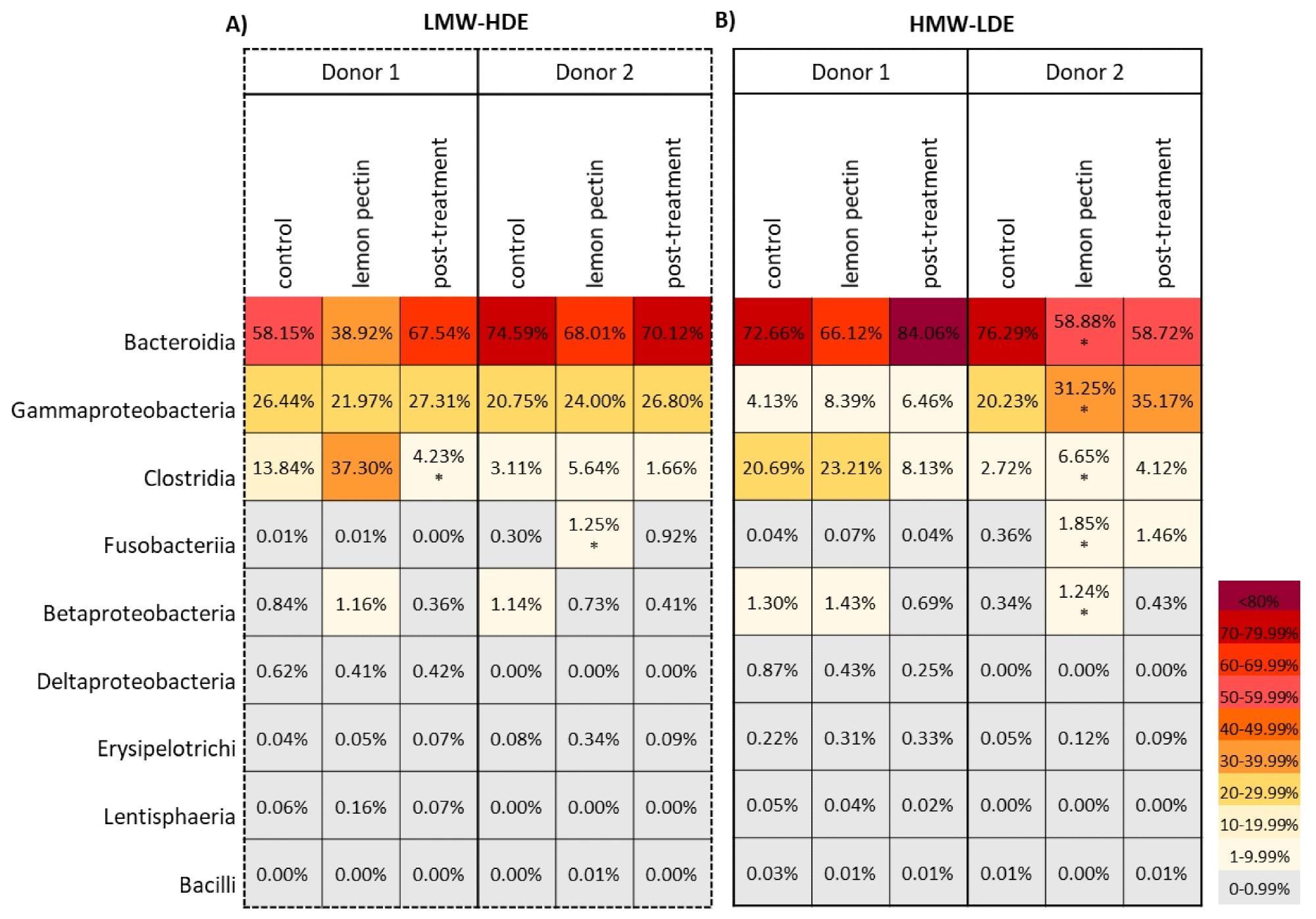 Heatmap depicting relative abundance at the class level for taxa present at >0.01% percent abundance in at least one sample. Significant changes are indicated in the figure with an asterisk (*) symbol. (A) LMW-HDE pectin. (B) HMW-LDE pectin.

The experimental findings of the current study revealed how pectin with varied chemical structures alters gut microbiota in a divergent manner. The detailed information on how pectin MW and DE impact the interaction between the gut microbiome and pectin molecules could positively help develop prebiotics.

In the future, more research must be conducted to better understand the role of lemon pectin MW and DE, particularly on their utilization by the gut microbiota, which influences the change in the structure and function of the microbiome.