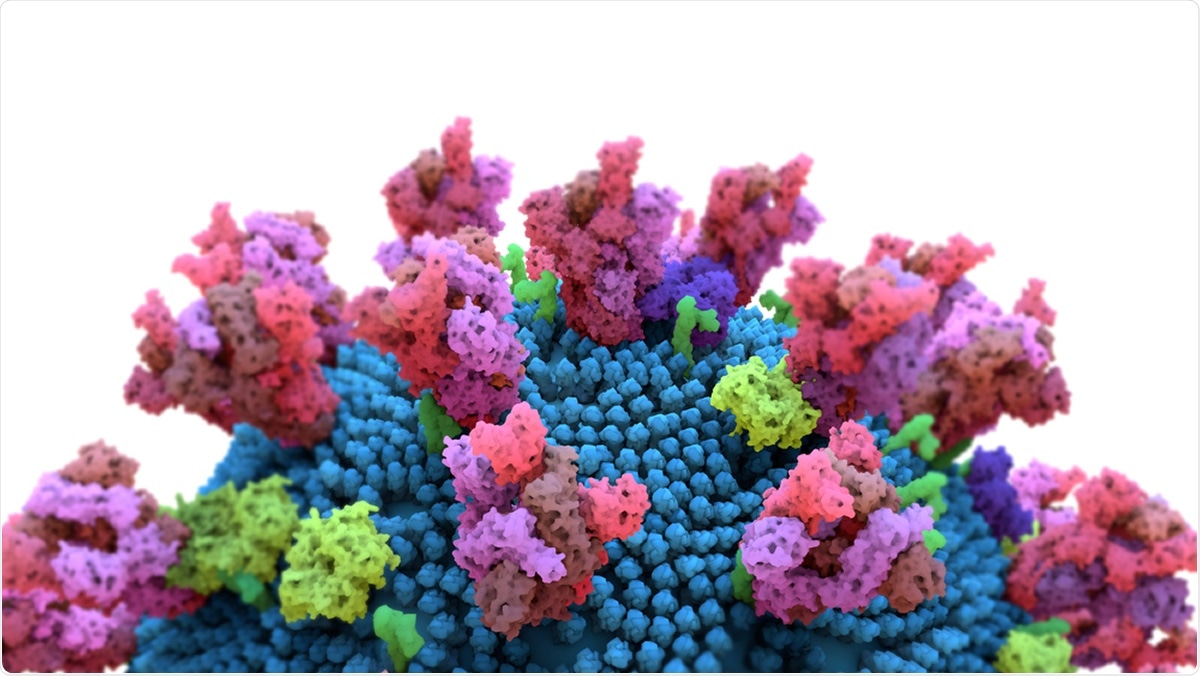 The COVID-19 pandemic is still actively spreading in many parts of the world, causing redoubled efforts to develop antivirals and vaccines against severe acute respiratory syndrome coronavirus 2 (SARS-CoV-2). A recent study explores the role of a second type of cell surface receptor, called neuropilin, in the virus’s entry into the host cell and its subsequent replication.

SARS-CoV-2 belongs to the same family as SARS-CoV and MERS-CoV, which caused the earlier outbreaks of SARS and MERS. It is especially similar to SARS-CoV, both being bound by the same host cell receptor, angiotensin-converting enzyme 2 (ACE2). However, it spreads far more extensively and rapidly. Whereas SARS-CoV spread mainly through the lower respiratory system, the other is transmitted through active pharyngeal shedding in upper airway secretions.

One of the most plausible reasons for the greater transmissibility of SARS-CoV-2 is the polybasic furin cleavage site at the interface of the two subunits, S1 and S2, that make up the characteristic spike protein. This site is not found in SARS-CoV, though it occurs in the spike protein of some other pathogens, notably Ebola, virulent bird flu strains, and HIV-1.

This novel cleavage site may increase the virus’s ability to cause clinical disease by setting the stage for the virus to fuse with the cell membrane, thus enabling it to enter the cell and establish infection.

It could also, in addition, possibly produce more receptor binding sites on the spike protein. When this site is cleaved by furin, it displays a conserved C-terminal sequence containing arginine (and occasionally, lysine instead) on the spike protein. This sequence fits the C-end rule (CendR), which means it can engage and activate another type of cell surface receptor, the neuropilins 1 and 2.

Cryo-electron microscopy confirms that the S1/S2 interface is available for interacting with the receptor.

The researchers tested pseudoviruses expressing the SARS-CoV-2 S protein for their ability to engage NRP1 and thus enter and infect the host cell in the absence of ACE2. The advantage of a pseudovirus in this situation is that it allows testing of viral entry in isolation from other parts of the life cycle. They used ACE2- and NRP1-negative cells that were transfected with plasmids to enable them to express ACE2 with either TMPRSS2, a transmembrane serine protease, or NRP1.

When only ACE2 was expressed, the cells became more susceptible to infection. When NRP1 was expressed alone, the level of infection was very low. However, when ACE2, TMPRSS2 and NRP1 were expressed together, the infection was greatly enhanced, showing that the latter potentiates viral entry and infection.

They then developed monoclonal antibodies (mAbs) to functionally block the b1b2 domain of NRP1, which binds to CendR peptides. They found that one of them was able to block the binding and internalization of silver nanoparticles carrying the classical CendR peptide that shows NRP1 binding.

This antibody was used to treat cells bearing ACE2, TMPRSS2, and NRP1, and resulted in a significant fall in infection. This was not seen with cells lacking NRP1 but bearing ACE2 and TMPRSS2. Also, when the pseudovirus was pre-incubated with the recombinant, soluble b1b2 domain of NRP1 alone, before being allowed to infect the above cell, there was a marked fall in the level of infection vs the above results.

Using a mutant form of SARS-CoV-2 that could not undergo cleavage, they found that unlike the wild-type virus, the mutant virus did not produce higher levels of infection in cells bearing ACE2/TMPRSS2/NRP1 compared to those expressing ACE2 or ACE2/TMPRSS2. This supports the need for furin cleavage to produce a CendR peptide that can bind to the NRP1 receptor. Pre-incubation with NRP1-mAb caused the wild-type infection to fall by 40% but not with the mutant virus.

The researchers also demonstrated that the specific C-terminal end sequence produced by spike protein cleavage at the S1/S2 junction is taken up by NRP1-expressing cells at a high level and in mice olfactory epithelium, which has a high expression of NRP1. In fact, in the latter case, the peptide was detected in the neurons and blood vessels of the brain of tested mice as well. This shows that it is a CendR peptide.

They then turned to examine the already published data on proteins found in infected cells from two sources. One is human bronchial epithelial cells (HBECs), while the other is cells retrieved from bronchoalveolar lavage fluid (BALF) of severely ill COVID-19 patients. Both showed an increased level of NRP1. Infected cells in the BALF also showed a higher level of RNA transcripts of NRP1 and NRP2 compared to uninfected cells.

Comparing published data on the expression of ACE2 and NRP1 in lung and olfactory tissue in humans, they found that ACE2 levels were extremely low or almost undetectable. Still, both NRP1 and NRP2 are expressed at high levels in all cells from these tissues, and especially in endothelial cells. NRP1 was detected in developing and immature olfactory neurons as well.

Since anosmia has been found in many COVID-19 patients, they looked for evidence of SARS-CoV-2 infection in the olfactory epithelium and found it in 5/6 cases. In all five, the infected cells also expressed NRP1 at a high level, traceable specifically to newly developing olfactory neurons.

The current study throws new light on one of the intriguing facts about SARS-CoV-2: the tissues preferentially infected by the virus are not those that express ACE2 at high levels. This indicates that this one relies on other factors to accomplish cell entry and infection like other viruses. This role seems to fit NRP1, either as a potentiating factor or even as an ACE2-independent route of entry in the presence of high viral titers.

This function of NRPs may be due to their expression at high levels on epithelial cells exposed to the outside and their ability to traffic the bound molecules across vascular boundaries, across cell membranes, and into tissues.