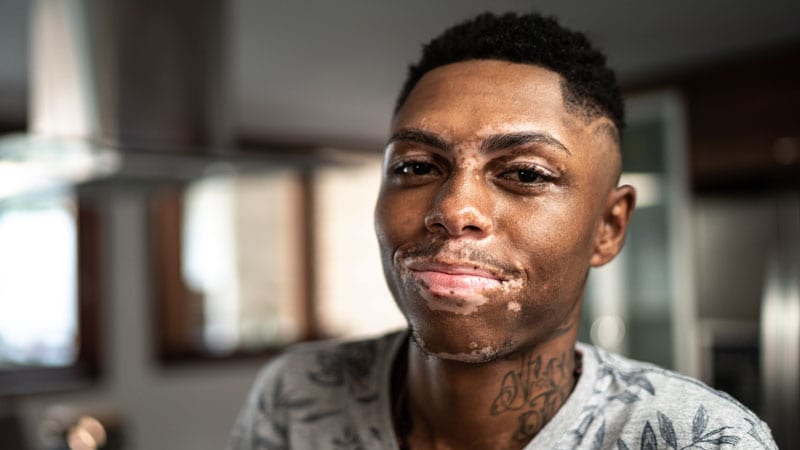 A topical cream formulation of the JAK inhibitor ruxolitinib was superior to its vehicle for treating vitiligo across all primary and secondary endpoints in two multicenter phase 3 trials presented together at the annual meeting of the European Academy of Dermatology and Venereology.

Patients aged 12 years or older with nonsegmental vitiligo and depigmentation covering no more than 10% of the total body surface area were eligible. The mean baseline F-VASI values were 1.0. The mean total VASI (T-FASI) values were 6.5. On those enrolled, half were female, 11% were adolescents, and 73% had Fitzpatrick skin phototypes III to VI.

Ruxolitinib cream provided near complete vitiligo clearance (F-VASI 90) on the face at 24 weeks in only about 15% of patients, but this was several times higher than the 2% achieved on vehicle in the TRuE-V1 (P < .01) and the TRuE-V2 trials (P < .05), respectively.

For F-VASI 50, the response rate with ruxolitinib in both studies was approximately 51%. Relative to the 17.2% response on vehicle in TRuE-v1 and 23.4% in TRuE-V2 (both P < .0001 vs. active therapy), the advantage of the topical JAK inhibitor was considered to be a clinically meaningful, not just significant from a statistical standpoint.

In fact, improvement on the 5-point Vitiligo Noticeability Scale “also supported a clinically meaningful benefit,” Rosmarin reported. When those achieving a score of 4 (much less noticeable) or 5 (no longer noticeable), the response rates at 24 weeks were 24.5% and 21.6% in the TRuE-V1 and TRuE-V2 trials, respectively. Again, these response rates were several times greater than the 3.3% (P < .001) and 6.6% (P < .01) observed in the vehicle arms of TRuE-V1 and TRuE-V2 (P < .01), respectively.

In vitiligo, where there has been recent progress in understanding the pathophysiology, loss of melanocytes in immune dysregulation has been linked to activation of the JAK signaling pathway, according to Rosmarin. In the 52-week phase 2 trial with 205 patients, ruxolitinib was associated with a sustained response and no serious treatment-related adverse events.

Patients are continuing to be followed in the TRuE-V1 and TRuE-V-2 trials. Based on the phase 2 data and on the progressive improvement still being observed at the end of 24 weeks in the phase 3 trials, Rosmarin expects 52-week results be valuable in understanding the clinical role of ruxolitinib.

“We will be looking for further improvement in response as we follow these patients out to one year,” he said.

Despite the promise of perhaps other JAK inhibitors, “we still need to understand how long it will take for the drug to offer optimal results. We already know that is more than 24 weeks,” said Hamzavi, who has been involved in the clinical trials with this drug but was not involved with the TRuE-V1 or -V2 trials.

He also said more followup is needed to understand the duration of effect. He is, however, optimistic about the clinical role of this mechanism for treatment of vitiligo.

“I do think that JAK inhibitors show a lot of promise [in vitiligo] for certain locations of the body,” he said.

Given the limited treatment options for effective and prolonged improvement in vitiligo, both Hamzavi and Rosmarin indicated an effective topical cream is likely to be considered by physicians and patients to be a substantial advance.

On September 21, ruxolitinib (Opzelura) 1.5% cream was approved by the US Food and Drug Administration for the short-term treatment of mild to moderate atopic dermatitis in children and adults ages 12 years and older — the first FDA approval of this product.

Ted Bosworth is a medical journalist based in New York City.