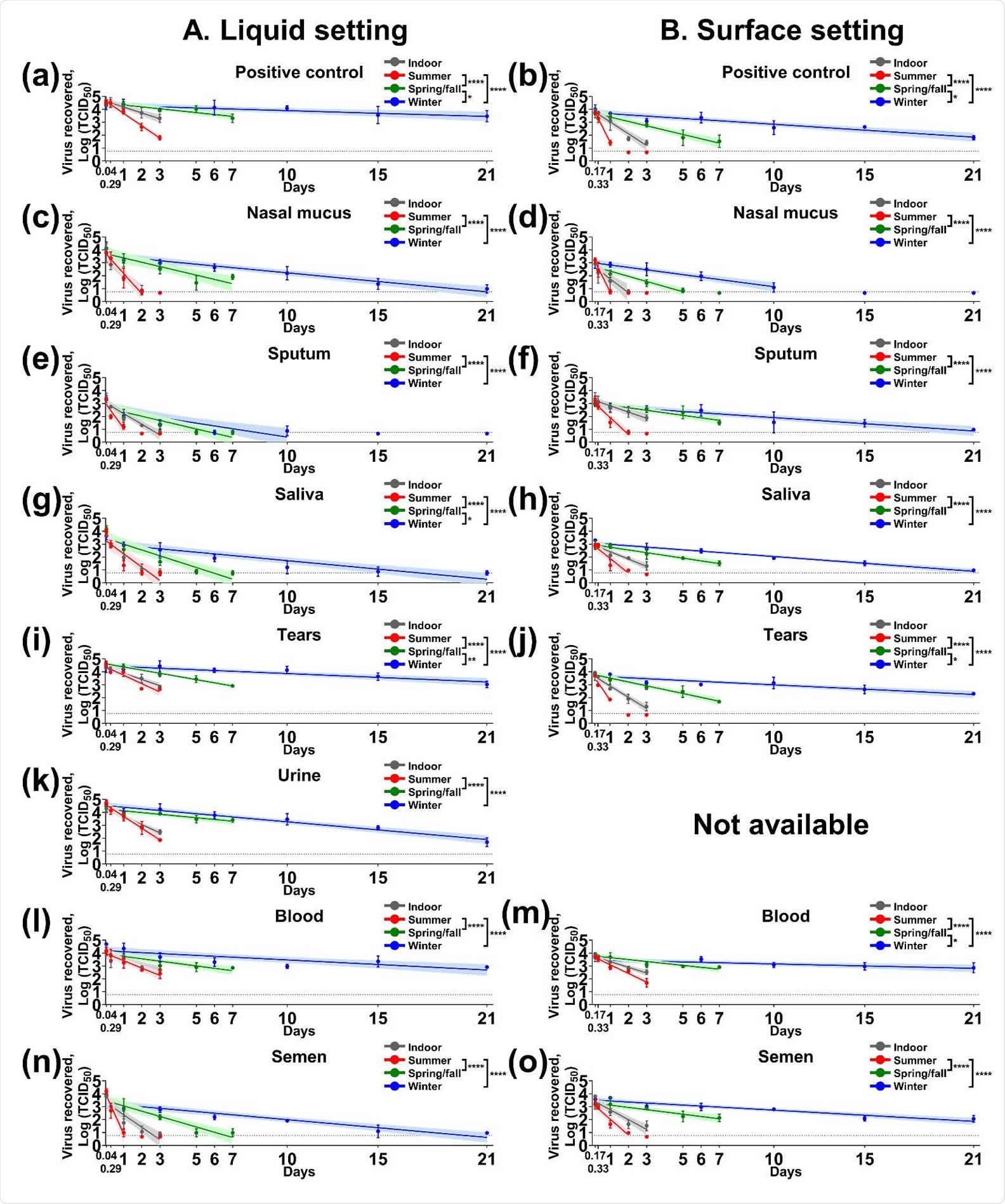 Previous studies have demonstrated SARS-CoV-2’s stability on various surface types and seasonal climatic conditions. SARS-CoV-2 can survive the longest on surfaces in winter, followed by spring and fall.

Meanwhile, SARS-CoV-2 was only stable for about 24 hours in breast milk and feces. The study findings, which appeared in the pre-print server bioRxiv*, highlight the potential risk of infectious body fluids in SARS-CoV-2 transmission.

SARS-CoV-2 stability in medium, human nasal mucus, sputum, saliva, tears, urine, blood, and semen under indoor and three seasonal conditions. The mixture of the virus (5×104 50% tissue culture infectious dose [TCID50]) and each biological fluid was placed in sealed tubes for (A) liquid setting (a, c, e, g, i, k, l and n) or (B) stainless steel for the surface setting (b, d, f, h, j, m and o). The mixture was dried for 4 hours inside a biosafety cabinet for the surface setting. The tubes and stainless steel were incubated under indoor (grey), summer (red), spring/fall (green) and winter (blue). At each time point, infectious virus was recovered in 2 mL medium, filtered through a 0.45 μm syringe filter and titrated on Vero E6 cells. Virus titers were log-transformed and a simple linear regression model was determined in Prism 9, Graphpad. Virus titers are expressed as mean log TCID50 ± standard deviation at each time point; the solid lines and theirs shade areas represent a best-fit line and 95% confidence interval of linear regression model under each condition. The dash line represents the limit of detection, 100.767 TCID50, for the virus isolation assay. Statistical analysis using ANOVA and subsequent Tukey’s adjustment was performed to determine seasonal difference of t1/2 half-life of SARS-CoV-2 in summer, spring/fall and winter conditions. Significance was marked * (adjusted p < 0.05), ** (adjusted p < 0.01), *** (adjusted p < 0.001) and **** (adjusted p < 0.0001). On x-axis, 0.04, 0.17, 0.29 and 0.33 days are equal to 1, 4, 7, and 8 hours, respectively.

Since the coronavirus disease first emerged in China, it has spread globally and impacted economies. It has posed a considerable threat to global public health, infecting more than 136 million people and claiming the lives of more than 2.94 million globally.

SARS-CoV-2’s transmission is primarily mediated through close contact with an infected person who sheds respiratory droplets. Droplets come in many sizes, wherein respiratory droplets are more than 5 μm in diameter. Meanwhile, smaller droplets that are less than 5 μm in diameter spread via airborne transmission. These droplets evaporate quickly to produce infectious aerosols that can remain suspended in the air for many hours and travel over a long distance.

Another route of transmission includes exposure to the infectious virus on surfaces. Droplets tend to settle down to the ground or on surfaces within a limited distance.

The virus can survive for several days, depending on the type of surface. Also, previous studies have shown that infectious droplets thrive longer on surfaces during the cold season than during the summer.

Scientists investigated the presence of SARS-CoV-2 in biological fluids since it serves as a possible infection source. Overall, nasal mucus, sputum, and saliva are significant components to generate the respiratory droplets where transmission of SARS-CoV-2 mainly occurs. 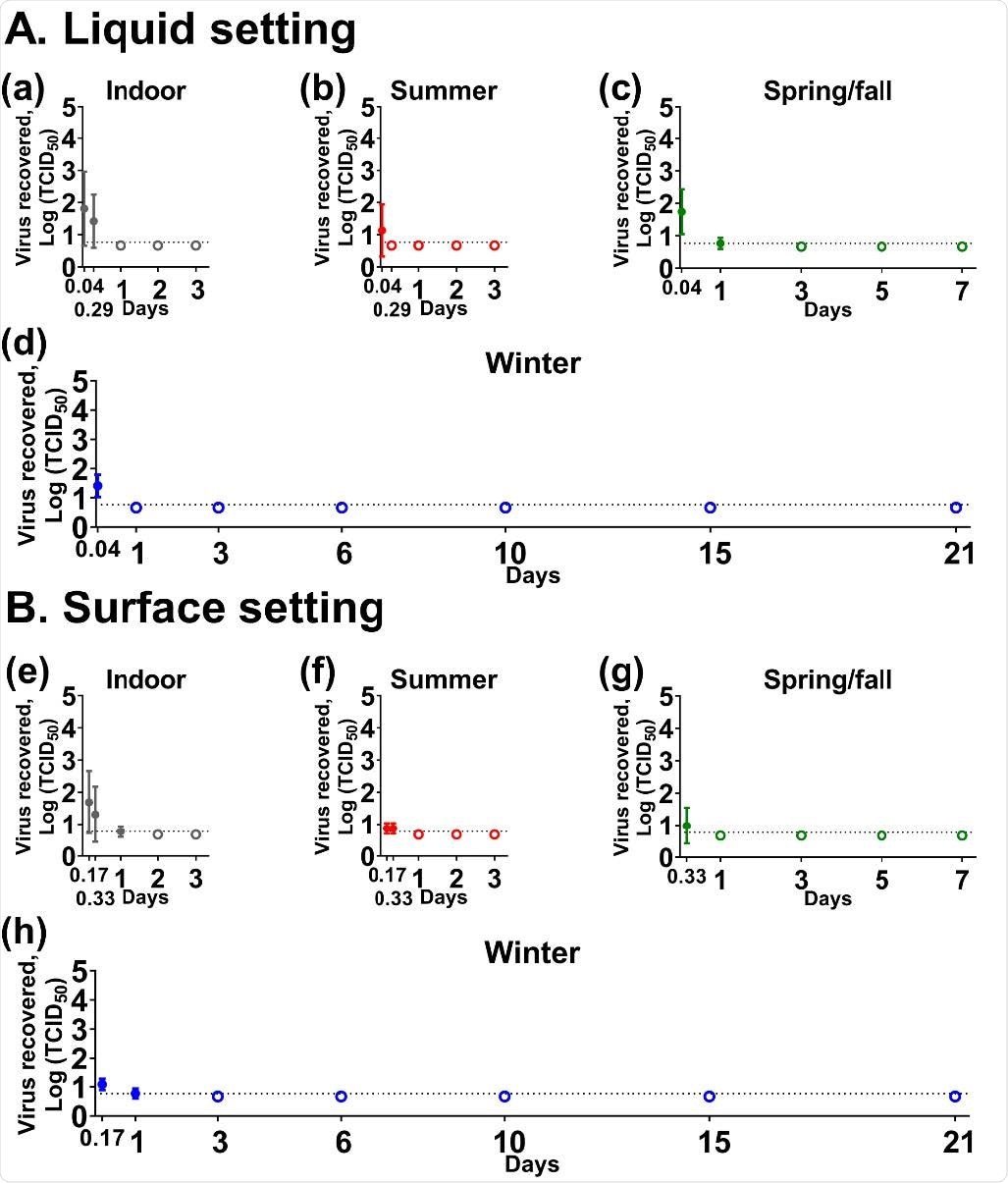 SARS-CoV-2 stability in human breast milk. A mixture of the virus (5×104 50% tissue culture infectious dose [TCID50]) and breast milk was placed in sealed tubes for (A) the liquid setting (a–d) or on (B) stainless steel for surface setting (e–h) and incubated under indoor (a and e), summer (b and f), spring/fall (c and g) and winter (d and h) conditions. Virus titer was expressed as mean log TCID50 ± standard deviation at each time point. The dash line represents a limit of detection, 100.767 TCID50, for the virus isolation assay. Empty dots represent negative results tested in triplicate. On x-axis, 0.04, 0.17, 0.29 and 0.33 days are equal to 1, 4, 7, and 8 hours, respectively.

The study highlights the stability of SARS-CoV-2 in various biological fluids. The team extensively assessed the virus stability in liquid and surface settings of body floods both indoor and under different seasonal conditions.

The researchers revealed that indoors, the viral stability or half-life values (t1/2) were between 5.23 and 16.74 hours in liquid and from 6.77 to 16.57 hours on a steel surface. They also found that the virus survived between 2.3–12.57 and 2.58–10.75 hours in liquid and surface settings, respectively, under summer conditions.

A previous study demonstrated that SARS-CoV-2 survived in nasal mucus and sputum for 24 hours under indoor and winter conditions. In the current study, however, the data showed that SARS-CoV-2 remained infectious for at least two days in nasal mucus for indoor and summer conditions, seven days during the spring or fall, and 21 days during the winter season.

The current study also showed the effect of temperature and relative humidity on virus survival and found that viral stability was extended during the spring/fall and winter conditions, while not during the summer.

The study findings also revealed that SARS-CoV-2 is unstable in human feces and breast milk, with the infectious virus detected only up to 24 hours after contamination.