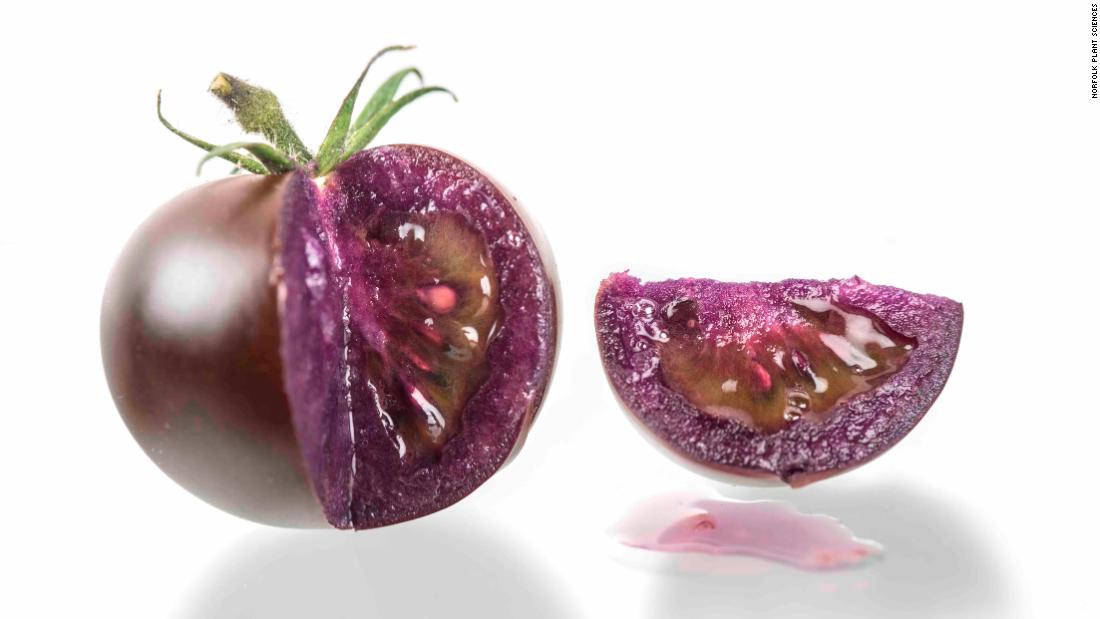 Health, Fitness & Food
Share on Facebook
Share on Twitter
Share on Pinterest
Share on LinkedIn
The USDA has approved a genetically modified purple tomato, clearing the path for the unique fruit to be sold in American stores next year.
“From a plant pest risk perspective, this plant may be safely grown and used in breeding,” the agency said in a September 7 news release.
The approval moves the purple tomato one step closer to widespread distribution. In addition to its unique color, the purple tomato also has health benefits and a longer shelf life than garden variety red tomatoes, scientists say.
The tomato was developed by a team of scientists, including British biochemist Cathie Martin, who is a professor at the University of East Anglia and a project leader at the John Innes Centre in Norwich, England.
Martin worked on pigment production in flowers for over 20 years, she told CNN. “I wanted to start projects where we could look and see whether there were health benefits for this particular group of pigments,” she said.
The pigments that drew Martin’s interest are anthocyanins, which give blueberries, blackberries and eggplants their rich blue-purple hues. With funding from a German consortium, she decided to engineer tomatoes that were rich in anthocyanins, hoping to “increase the antioxidant capacity” of the fruits.
By comparing regular tomatoes to the engineered purple tomatoes, she would be able to easily identify whether the anthocyanins were linked to any specific health benefits.
To engineer the purple tomatoes, the scientists used transcription factors from snapdragons to trigger the tomatoes to produce more anthocyanin, creating a vibrant purple color.
Martin and her colleagues published the first results of their research in 2008 in an article in Nature Biotechnology.
The results were “stunning,” she said. Cancer-prone mice that ate the purple tomatoes lived around 30% longer than those that ate normal tomatoes, according to the study.
Martin said there are “many explanations” as to why anthocyanin-rich tomatoes may have health benefits. There are “probably multiple mechanisms involved,” she said. “It’s not like a drug, where there’s a single target. It’s about them having antioxidant capacity. It also may influence the composition of the microbiome, so it’s better able to deal with digestion of other nutrients.”
And in 2013, Martin and colleagues released a study that found the purple tomatoes had double the shelf life of their red cousins.
Martin established a spinout company, Norfolk Plant Sciences, to bring the purple tomatoes to market. Nathan Pumplin, the CEO of Norfolk’s US-based commercial business, told CNN that the purple tomato “strikes a cord with people in this very basic way.”
The distinctive purple color means that “it takes no imagination to see that it’s different,” Pumplin said. “It really allows people to make a choice.”

FDA approval and commercialization are next steps

In the past, forays into genetically modified foods have often focused on engineering crops that are more sustainable to produce, he added. But for consumers, the benefits of eating a genetically modified food are murky.
“It’s very abstract, hard to understand,” Pumplin said. “But a purple tomato — you either choose or choose not to consume.” The difference between the GMO (Genetically Modified Organism) product and the non-modified tomato are stark — and the possible health benefits for consumers are also clear.
Pumplin says that consumers are “warming up” to genetically modified foods across the world.
“We look at the problems facing our society as far as sustainability, climate change, health tied to diet and nutrition, and what’s clear from the response from our announcement is that it’s a really important topic to a lot of people,” he said. “I’m encouraged that a lot of people are starting to relook at biotechnology in light of the important challenges.”
At the same time, “GMOs are not a silver bullet,” he said. “It’s one tool in our toolbox as plant scientists, as scientists, agronomists, to improve the food production system.”
The next steps for the purple tomato are FDA approval and commercialization, Pumplin said. “We need to breed excellent, delicious purple tomatoes. We need to work with producers to produce them and distribute them.”
Norfolk will begin to launch limited test markets in 2023 to identify which consumers are most interested in purple tomatoes.
As for the taste? The purple tomato is indistinguishable from your standard red tomato, Pumplin said.
“It tastes like a great tomato,” he said.
This article was originally published by Cnn.com. Read the original article here.
Share on Facebook
Share on Twitter
Share on Pinterest
Share on LinkedIn

IBD Appears More Prevalent in Men Who Have Sex With Men
Improving care and reducing the morbidity, mortality associated with pediatric AKI
Exploring biological mechanisms behind the link between obesity prior to pregnancy and elevated risk of pediatric ALL
Spiral galaxy captured in ‘unprecedented detail’ by Webb telescope
Texas AG Ken Paxton fled home with his wife to avoid subpoena in abortion case, court filing says