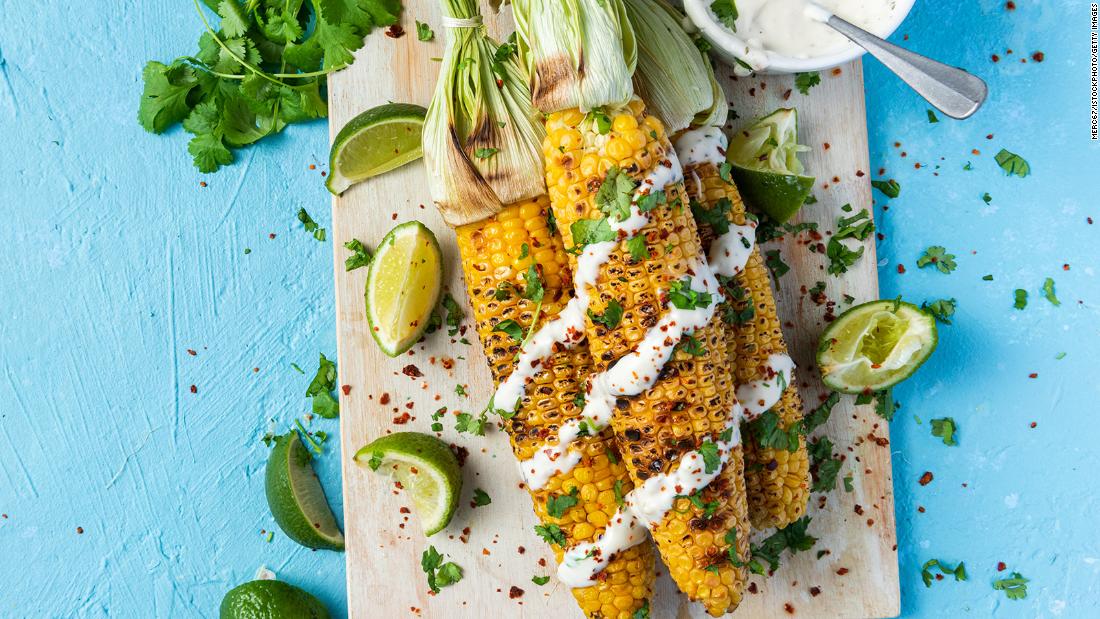 Health, Fitness & Food
Share on Facebook
Share on Twitter
Share on Pinterest
Share on LinkedIn
Fresh corn is at its peak between July and September for most of the United States — and since the kernels are at their sweetest and juiciest as soon as each ear is picked, now’s the time to take advantage. It doesn’t take much prep to make it taste amazing, so it’s one of the best foods to enjoy in a heat wave.
If you think corn has zero nutritional value because it passes through you intact, that’s not the case, according to Julia Zumpano, a registered dietitian with the Cleveland Clinic’s Center for Human Nutrition. “Corn is definitely good for you,” she confirmed, and “eating fresh corn on the cob will give you the most nutritional benefits.”
Much of corn’s reputation is unjustified. “It’s given a bad rap as being high in sugar,” Zumpano said, but depending on the size, an ear of corn has between 3 to 6 grams of sugar and is about 100 to 110 calories. In addition, when you eat corn, “a lot of the carbohydrates aren’t necessarily being digested or absorbed. It’s the joy of eating a carb and knowing you’re not digesting half of it.”
It’s because corn is a good source of fiber, and “you can’t digest fiber, but it helps regulate bowel movements and limit constipation,” she said, as well as keeping you full between meals. Fiber “has also been shown to reduce levels of blood sugar and cholesterol” in various studies.
Corn is also high in lutein and zeaxanthin, two carotenoids that may help decrease the risk of macular degeneration and cataracts, Zumpano said, and contains B vitamins as well as essential minerals such as magnesium and potassium.
Yellow corn is higher in antioxidants than white corn because of the pigments in each kernel. Red, blue or purple sweet corn has even more pigments, if you know a home gardener or local farmer who’s growing these rarer varieties.

You can eat fresh corn raw or cook it in a few different ways: in the microwave, boiled on the stovetop or on the grill or a fire. While each method has its devotees, I prefer to grill corn in the husk unsoaked because it imparts a slight smoky flavor to the kernels without leaving them overcooked and gummy.
To use corn in the recipes that follow, you’ll need to strip the kernels off the cob. There are corn stripping tools that can help you accomplish this task, but my favorite method uses two items already in the kitchen: a sharp paring knife and a large bowl.
Hold the corn vertically and stem side up in the bowl. Run the paring knife down each side of the corn, turning as you go, to remove the kernels. By using a small knife and a big bowl, you won’t hit the sides with your knife and the corn won’t bounce everywhere.

Sure, it’s the middle of summer. But if you can stand to turn on your oven, start your day with double corn muffins studded with fresh corn and crunchy polenta. Serve warm or at room temperature with honey butter and fresh summer berry preserves.
Brunch can go sweet or savory with charred corn crepes. They pair well with fresh berries, Nutella and whipped cream but also with salsa, scrambled eggs and sour cream for a breakfast taco-esque dish.
The same goes for corn waffles and corn pancakes. Douse them in maple syrup or powdered sugar or use them as a base for savory toppings such as bacon, chopped scallions, chopped tomatoes and shredded cheese.
Sign up for CNN’s Eat, But Better: Mediterranean Style. Our eight-part guide shows you a delicious expert-backed eating lifestyle that will boost your health for life.

Corn for lunch and dinner

On or off the cob? That’s the difference between elote and esquites, the Mexican corn dish made with cotija cheese, crema and/or mayonnaise, chili powder and lime juice. The creamy, tangy and spicy flavors in this traditional snack lend themselves to adaptation in a host of other recipes. Make elote-inspired soup, pasta salad or even loaded tater tots.
For those sweltering summer evenings, chilled corn soup fits the bill. With a quick simmer on the stove, you won’t break a sweat pulling it together. Make it in the morning and let it chill for dinner later.
When it comes to summer salads, corn rivals tomatoes for the title of most popular ingredient. It pairs well with nearly any other ingredient in a variety of flavor profiles. Chances are a kitchen-sink salad will turn out well with whatever you have on hand, but you can also take inspiration from these ideas:

Sweet corn is called that for a reason — it’s sweet enough to be used as an ingredient in baked goods beyond cornbread and muffins. But if you’re not feeling up to baking in the summer heat, use corn in desserts that are cool and refreshing.
Corn ice cream might sound strange, but the flavor feels just right for summertime. New York ice cream shop Ample Hills ships its Corn to Run flavor nationwide, but you can also make homemade ice cream with your own local corn. This corn ice cream recipe includes a caramel-candied bacon topping that will make you feel like you’re at the state fair.
Sweet corn pudding can be made either Thai or Vietnamese style with tapioca or rice to thicken and flavor the spoonable, soup-like puddings. In both variations, the stripped corn cobs are simmered in water to infuse them with delicate flavor before adding a starchy thickener, fresh corn kernels, sugar and coconut milk.

Casey Barber is a food writer, artist and editor of the website Good. Food. Stories.

Rachel Zegler Says She Had a Breast-Cancer Scare When She Was 19
COVID-19 Associated With Increase In New Diagnoses Of Type 1 Diabetes In Youth, By As Much As 72%
6 ways life coaching for mums and parents can help
Medicare eligibility may increase food pantry visits, improve food security among seniors
Novel PTP1B inhibitor drug candidate can prevent lethal lung inflammation in mice