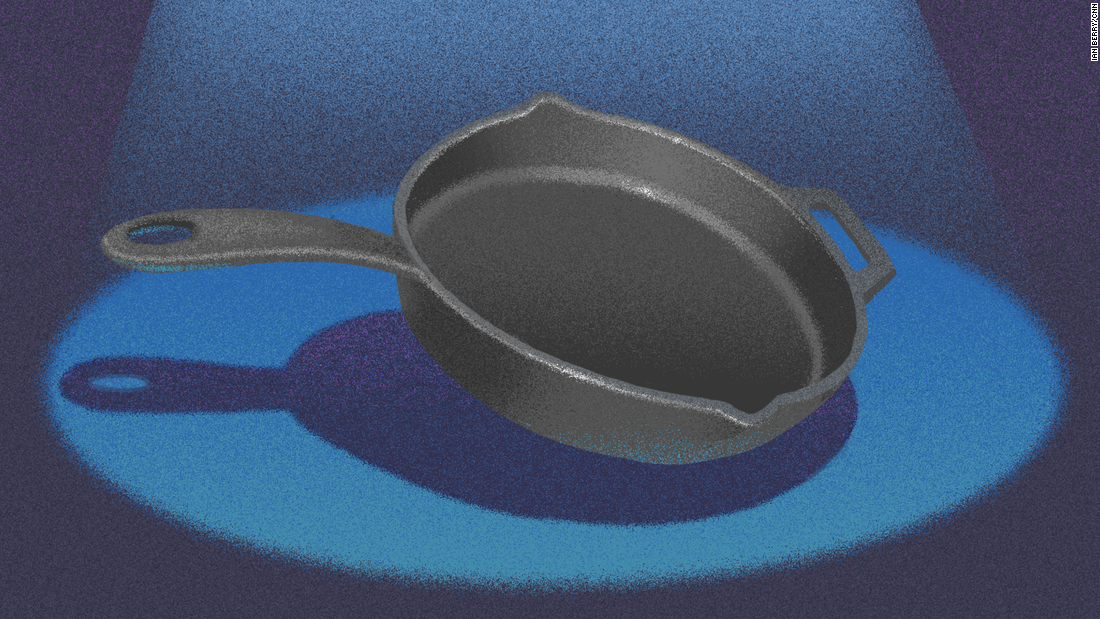 Health, Fitness & Food
Share on Facebook
Share on Twitter
Share on Pinterest
Share on LinkedIn
A cast-iron pan is one of the most versatile and reliable pieces of kitchen equipment for any cook, and unlike most electronic kitchen must-haves, it can last for generations. (I’m looking at you, air fryer.)
Because it can handle high temperatures and retains heat well, I love that cast iron can go from stovetop to oven. It’s just as good for searing steaks or chicken breasts as it is for scrambling eggs, stir-frying vegetables, cooking homemade tortillas or even baking a fruit cobbler.
It’s also an affordable piece of cookware — so collecting cast iron might become an obsession. I love restoring vintage cast-iron pans I find in antique shops, but novice cast-iron cooks can pick up a Lodge skillet, made in the country’s oldest and longest-running cast-iron foundry in Tennessee, for less than $30.
Despite what you might have heard, I can assure you that cast-iron pans are incredibly easy to maintain. You don’t need more than hot water to clean them, along with a little kosher salt to scrub off any stubborn bits. How’s that for sustainable?
Frustrated cooks often ask me what they can do about their scratched nonstick pans, and I wholeheartedly recommend cast iron as a durable replacement. Unlike coated nonstick pans, the finish on a cast-iron pan doesn’t degrade over time. In fact, the nonstick properties of cast iron improve with repeated use, as the oils used in cooking become part of the pan itself.
There’s no need to worry about using metal utensils on cast iron, either. If you accidentally scratch the finish, you can reseason cast-iron skillets easily with heat and vegetable oil.
One note: Until you’ve built up the pan’s seasoning, avoid cooking highly acidic foods such as tomatoes, vinegar, wine or citrus in the pan. The acid can eat away at the finish, but a well-seasoned pan can handle a brief simmer with these ingredients. (Use enameled cast-iron pieces such as a Dutch oven for dishes that require longer cooking, like tomato sauce.)

What to make in your cast-iron skillet

For most meals, a 10-inch, high-sided cast-iron skillet is the pan you’ll want to grab again and again. Once you start using it, you’ll find it making its way onto the stove (or into the oven) for many a meal, but here are some suggestions to get going.

There’s no need to pull out a casserole dish when making this hearty and rustic dish. Sauté and simmer ground meat (or lentils, for a vegetarian option) and vegetables in the skillet with wine and broth, then top with mashed potatoes and transfer the pan to the oven.
And while the names are frequently used interchangeably, shepherd’s pie traditionally refers to a lamb-based version of the dish, while cottage pie refers to the beef-based version. To make the variation known as Cumberland pie, top your mashed potatoes with shredded cheese and breadcrumbs.

Though many recipes call for boiling and cooking pasta separately from the creamy cheese sauce, you can do it all in one cast-iron skillet for a creamy one-pot meal with crispy broiled bits. Who needs boxed mac and cheese when you have this stovetop option?
When the craving for mac and cheese strikes in the middle of the summer, there’s no need to heat up the oven. Use your cast-iron skillet to make a bubbling baked mac and cheese dish right on your grill.

While roasting a whole chicken is always a comfort food winner, bone-in chicken breasts and thighs are ideal for a cast-iron skillet meal because it’s easy to get a crispy-skinned finish on the cuts.
The simplest method is this: Brown the chicken skin side down in oil or butter over medium high heat (it takes about three or four minutes), then set aside and briefly sauté vegetables in the pan drippings. Return the chicken to the pan, skin side up and bake at 400 degrees Fahrenheit until the chicken reaches 165 degrees on a meat thermometer.
The variations on this meal template are nearly infinite, but you can start with chicken and wild mushrooms, Greek-style chicken thighs with olives and lemon or roasted chicken and potatoes with pan sauce.
When you want a thick and chewy crust for family pizza night, ditch the baking stone and use the cast-iron skillet instead. Preheating the skillet in the oven gives dough a sizzling surface that helps the pizza puff up to pillowy heights.
When using store-bought pizza dough, bring dough to room temperature before stretching it out. Doing so helps prevent the dreaded bounce-back reaction that keeps the dough from fully filling out the pan.
Or for a pizza that will take you back to the days of red-checkered tablecloths, Tiffany-style lamps (and the Book It! program for millennials), make your own pan pizza dough.

For a weekend breakfast — or a weeknight breakfast for dinner — bust out the cast-iron skillet to make an impressive looking Dutch baby. This family-size pancake puffs up in the oven, then deflates to create a bowl-shaped pastry that’s perfect for topping with sweet or savory ingredients.
Try a sweet maple buttermilk Dutch baby topped with berries and cream or a savory Dutch baby topped with poached eggs and ham.
Whether you like it sweetened with sugar or honey, loaded with fresh corn or jalapeño peppers or slathered in butter, cornbread baked in a cast-iron skillet is even better because of the crunchy browned crust.
Preheat the pan in the oven, then add enough oil or fat (such as bacon drippings) to cover the bottom of the pan before pouring in the batter. Any cornbread recipe sized for a 9-inch baking dish will also work in a skillet. Try this extra crunchy version made with both polenta and millet.
This traditional Persian rice dish is famous for its crispy golden bottom layer, and that’s a feat you can achieve with ease in a cast-iron skillet. Because it holds on to heat, the pan helps the rice cook to a crunchy finish without burning or scorching in spots.
Make the rice as a side dish or serve it as a meal of its own topped with turmeric chickpeas and greens or spiced chicken.

If you make one big Oreo-studded brownie or chocolate chip cookie in a cast-iron skillet, is it considered a single serving? Whether you prefer the crispy, chewy edges or the gooey, rich center — or a little of both — these desserts deliver. Serve with whipped cream or vanilla ice cream on top.

Casey Barber is a food writer, artist and editor of the website Good. Food. Stories.

Risk Prediction Models Identify Presymptomatic Alzheimer’s Disease
PI3K Inhibitor Fails to Pass Muster With FDA Advisory Committee
Rest to recover: Grace Victory on the power of giving yourself a break
Microplastics detected in placentas, infant feces, breastmilk, and infant formula
Rachel Zegler Says She Had a Breast-Cancer Scare When She Was 19