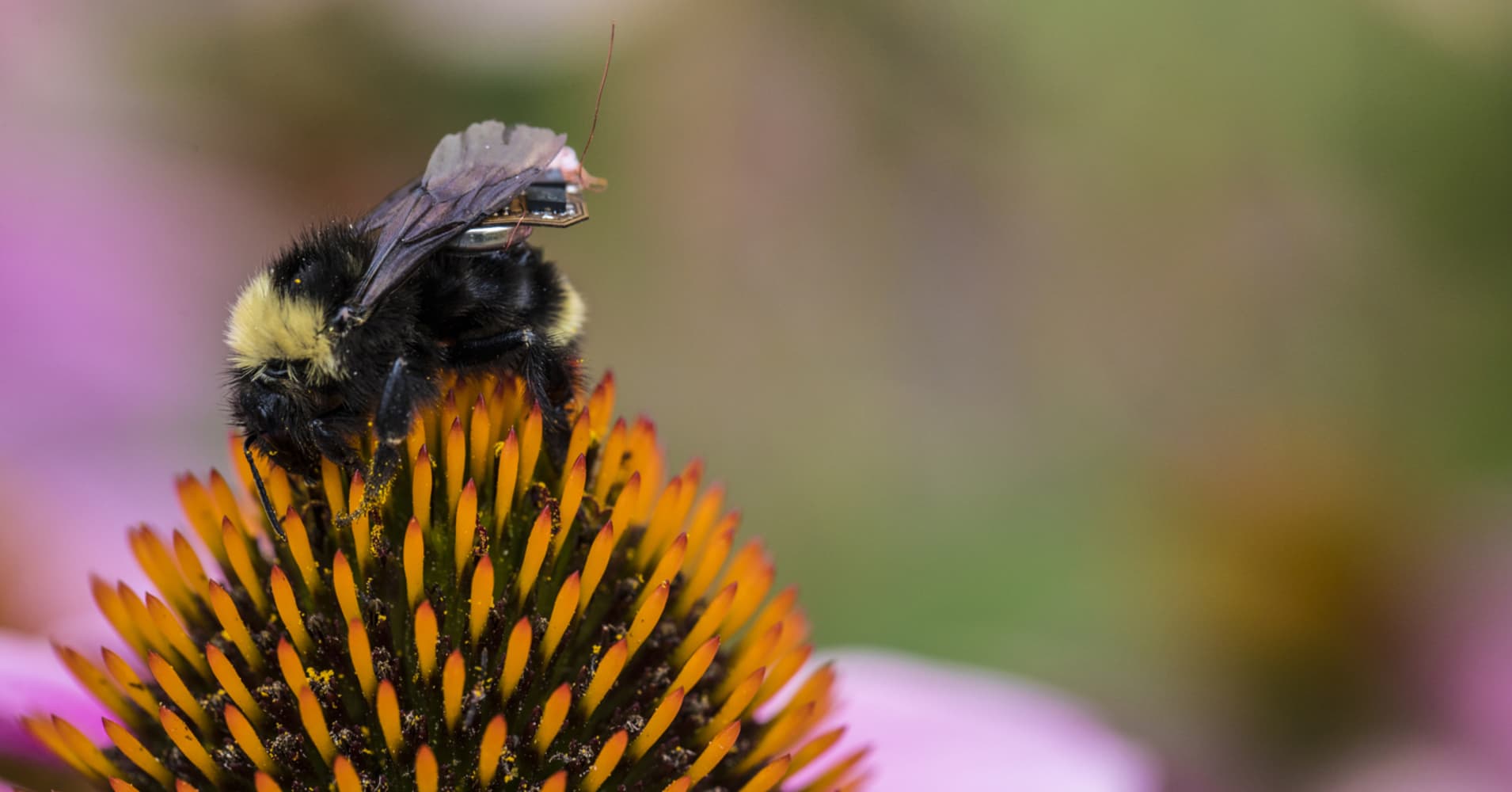 The smaller the drone, the shorter the flight time — unless your drone is a real live bumblebee.

Average hobby drones typically have a flight time of around 20 minutes because rotary aircraft require a great deal of energy to stay airborne — more energy means heavier batteries. So what do you do if your drone is the size of an insect?

On Tuesday, engineers at the University of Washington announced they have come up with a power source both strong and light enough to keep their “drone” in flight for a continuous stretch of about seven hours.

Vikram Iyer, Rajalakshmi Nandakumar, Anran Wang, Sawyer B. Fuller and Shyamnath Gollakota refer to it as Living IoT — a flying wireless platform, which includes sensors, wireless communication and location trackers, that ride aboard live insects. In this case, a bumblebee that will soar over huge fields and monitor temperature, humidity or crop health.

Because insects can fly on their own, the package requires only a tiny rechargeable battery that can last for seven hours of flight. The whole sensor package costs just a few dollars and weighs only 102 mg, or about the weight of seven grains of uncooked rice. (Bumblebees can carry payloads close to their body weight. A single bee weighs .00025 lbs, or 113 mg.)

“We decided to use bumblebees because they’re large enough to carry a tiny battery that can power our system,” said Iyer, a doctoral student in the UW Department of Electrical and Computer Engineering.

Unlike man-made drones, bees can fly for hours and can also sense things that electronic objects cannot, Gollakota said.

“With a drone, you’re just flying around randomly,” he said, “while a bee is going to be drawn to specific things, like the plants it prefers to pollinate. And on top of learning about the environment, you can also learn a lot about how the bees behave.”

In September the UW research team plans to present their findings at ACM MobiCom 2019, an international forum dedicated to addressing the challenges in the areas of mobile computing and wireless and mobile networking.

This isn’t the first time the team has unveiled a method for insects in flight. Relying on funding from UW, last May they unveiled RoboFly, a robo-insect powered by an invisible laser beam that is pointed at a photovoltaic cell, which is attached above the robot and converts the laser light into enough electricity to operate its wings. But with its tiny battery the most it can do thus far is take off and land.

Nevertheless, the engineers don’t plan to abandon RoboFly, as there are many promising applications a robo-insect can handle that living IoT simply can’t. For one, RoboFly’s flight patterns can be controlled, meaning that someday, among other things, they will be able to sniff out gas leaks, swoop beneath plants to detect pests and disease and slip into tiny spaces to find disaster survivors.

For living IoT, though, the reality is here. To track the bees, the UW researchers set up multiple antennas that broadcasted signals from a base station across a specific area. A receiver in a bee’s backpack used the strength of the signal and the angle difference between the bee and the base station to triangulate the insect’s position.

“To test the localization system, we did an experiment on a soccer field,” said Wang, a doctoral student in the Allen School. “We set up our base station with four antennas on one side of the field, and then we had a bee with a backpack flying around in a jar that we moved away from the antennas. We were able to detect the bee’s position as long as it was within 80 m, about three-quarters the length of a football field, of the antennas.”

And since bees almost always fly within 100 m of their hive, that wasn’t a concern.

The team then added a series of small sensors to the backpack to monitor temperature, humidity and light intensity so the bees could collect data and log that information along with their location.

“The rechargeable battery powering the backpack weighs about 70 mg, so we had a little over 30 mg left for everything else, like the sensors and the localization system to track the insect’s position,” said Nandakumar, a doctoral student in the Allen School.

When the bees return to the hive for the night, the battery recharges and the data is uploaded. Eventually, the bees will be able to compile information about an entire farm.

Bees are essential. They are major pollinators for the crops we depend on, and without them one-third of our foods would disappear, according to the BBC.

But according to the Environmental Protection Agency, bee populations have been disappearing globally at an alarming rate since the late ’90s. Some of the reasons: climate change, pesticides, parasites, disease, habitat loss and harmful mite infestations.

The UW engineers believe their sensors will help. “With the sensors, now we can understand bees’ behavior in the wild,” said Gollakota. “We can potentially understand why these bees are going extinct. Now we have a bird’s-eye view of what the bee is feeling or sensing.”

The instant updates on temperature and humidity, he said, can indicate bee activity and health. In time, the engineers plan to add a camera to the sensor. “We need to address security and privacy concerns before that, because once you put cameras on insects, there are other implications,” Gollakota said.

This isn’t the first time bumblebees have been outfitted with tech to collect flight data. Other research groups are fitting bumblebees with simple “backpacks” by supergluing small trackers, like radio-frequency identification tags, to them to follow their movement. These prior studies, however, involved backpacks that track bees’ locations over very short distances — around 10 in. — without anything that could survey the environment.

The UW engineers claim the sensors do not harm the bee in any way. “The whole process is very simple. All we are doing is just putting on a tiny backpack, and it is very easy for these bees to carry. They go and fly around and are completely fine.”

To get the sensors on the bees, Gollakota said the researchers put a jar at the entrance of the hive. “The bees come out and you cool down the bee in the fridge for two to three minutes, and that reduces the motion of the bee. Then you stick the sensor on the back in less than a minute. A minute after that they are out flying around foraging for food. It’s basically a hibernation process. During hibernation, when it becomes cooler, they become inactive and go silent,” he said.

Androgen-Targeting Combos Show Promise in Prostate Cancer
Combining existing drugs improves prostate cancer survival
10 Mental Health Podcasts That Will Help You Feel Seen (and Teach You Something, Too)
Is Sugar Unhealthy For Kids? Healthy Snack Alternatives Your Child Will Love
All You Need Are 5-Pound Weights to Get a Serious Shoulder Strength Workout