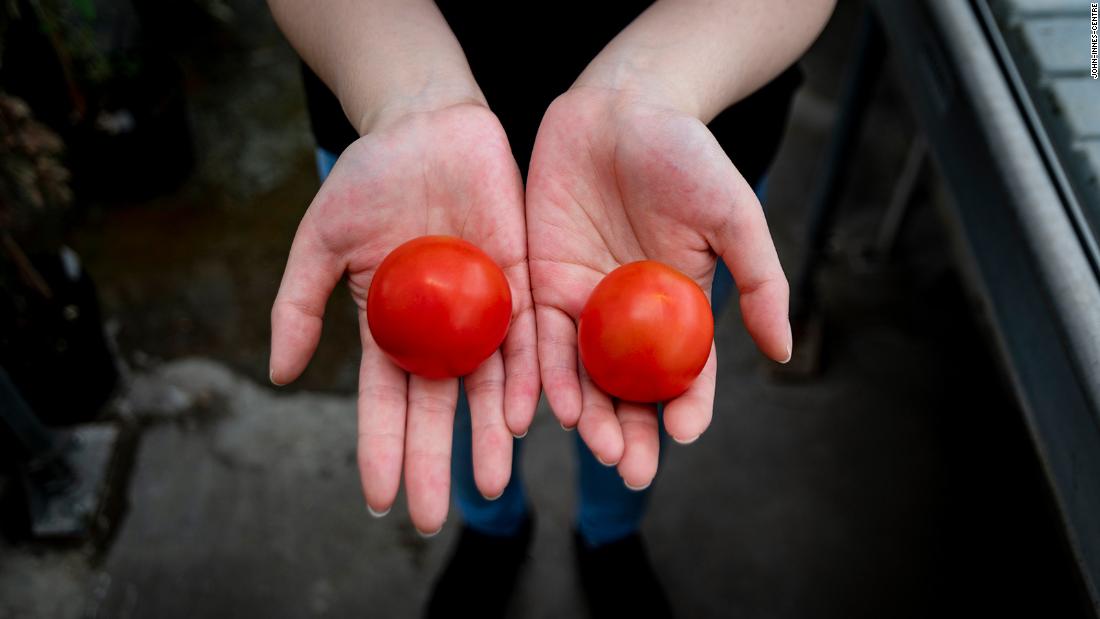 Health, Fitness & Food
Share on Facebook
Share on Twitter
Share on Pinterest
Share on LinkedIn
Now, a team of researchers have come up with a potential new and vegan source of vitamin D: tomatoes gene edited using CRISPR-Cas9 technology to contain a precursor to vitamin D.
If the process is adopted commercially by farmers and producers, these tomatoes could help address vitamin D insufficiency, which the study said affects 1 billion people globally.
“This exciting discovery not only improves human health but contributes to the environmental benefits associated with more plant-based diets — often linked with a challenge in securing some key vitamins and minerals widely found and bioavailable in animal products,” Guy Poppy, a professor of ecology at the University of Southampton, told the Science Media Centre in London. He wasn’t involved in the research.
Vitamin D supplements are widely available in many countries, but coauthor Cathie Martin, a professor at the John Innes Centre in Norwich, England, said that eating a tomato was “so much better than taking a pill.”
“I think that having a dietary source (of vitamin D) in the form of a plant also means that you can get added benefit from eating tomatoes. We don’t eat enough fruit and veg anyway. A tomato is a good source of vitamin C as well,” she said at a news briefing.
The study published Monday in the scientific journal Nature Plants.

The main source of vitamin D for most people is dietary, but our body also makes the micronutrient when skin is exposed to UVB light — that’s why it’s sometimes called the sunshine vitamin. The scientists harnessed a similar process in tomato plants.
The compound in the skin that can make vitamin D is known as 7-DHC, or provitamin D3, and it’s also found in tomato plant leaves and unripe green fruit.
The researchers blocked a gene in tomato plants that normally converts provitamin D3 into cholesterol, which enabled provitamin D3 to accumulate in the ripe tomato fruit.
To convert the provitamin D3 into vitamin D3 that helps our bodies, the tomatoes were treated with UVB light. The study found that provitamin D3 in one tomato — once converted to vitamin D3 — would be equivalent to the amount of vitamin D3 contained in two medium-size eggs or 28 grams (1 ounce) of tuna.
A trial in the United Kingdom is assessing whether growing the tomato plants outdoors, where they would be exposed to natural sunlight, would automatically result in the conversion of 7-DHC to vitamin D3. The first fruits are expected to ripen by the end of June, Martin said. The tomatoes could also be sun-dried once picked, removing the need for treatment with UVB light, she added.
The UK Parliament passed new legislation earlier this year that is designed to facilitate trials of gene-edited crops.

The gene-blocking technique, which the researchers are making freely available with the publication of the paper, could also be applied to other species of solanaceous plant such as bell peppers, chiles, eggplants and potatoes, Martin said.
Mushrooms can also be a source of vitamin D when treated with UVB light or wild grown, according to the researchers. However, these plants produced vitamin D2, which the paper said was “substantially less bioeffective” than vitamin D3, which comes from meat and dairy.
Also, vitamin D3 supplements typically aren’t vegan, said Susan Lanham-New, a professor of nutritional sciences at the University of Surrey in the UK. She wasn’t involved in the study.
“Lanolin, which is the main source (for D3), is extracted from sheep’s wool. The sheep is still alive so it is OK for vegetarians. But it is not for vegans and that’s one of the things that makes this study very extraordinary is that you have a D3 source (from a plant),” she said at the briefing.
The leaves of the gene-edited tomato plants also contained a substantial amount of provitamin D, the researchers said. They were looking at ways this waste material could be turned into vegan vitamin D supplements. The study team hoped this could act as incentive for producers to plant and produce the biofortified tomatoes.
The gene-edited tomatoes looked indistinguishable from and tasted the same as regular tomatoes, said coauthor Jie Li, a postdoctoral researcher at the John Innes Centre, and gene editing didn’t affect the plan’s growth, development or yield.
The scientists who devised the CRISPR-Cas9 gene-editing technology won the Nobel prize in 2020. The tool is having a major impact on biomedical research, clinical medicine, agriculture and farming. Like a pair of precision scissors, it can target predetermined sites in genetic material, knocking out a particular gene or inserting new genetic material.
This article was originally published by Cnn.com. Read the original article here.
Share on Facebook
Share on Twitter
Share on Pinterest
Share on LinkedIn

COVID-19 pandemic linked to lower antibodies in breastmilk
In memory of Dame Deborah James
Hopkins experts provide top tips to keep the summer fun and safe
Study: Nearly 80% of people in the U.S. have low to moderate cardiovascular health
A Closer Look at the Monkeypox Outbreak’s Less Than Typical Symptoms