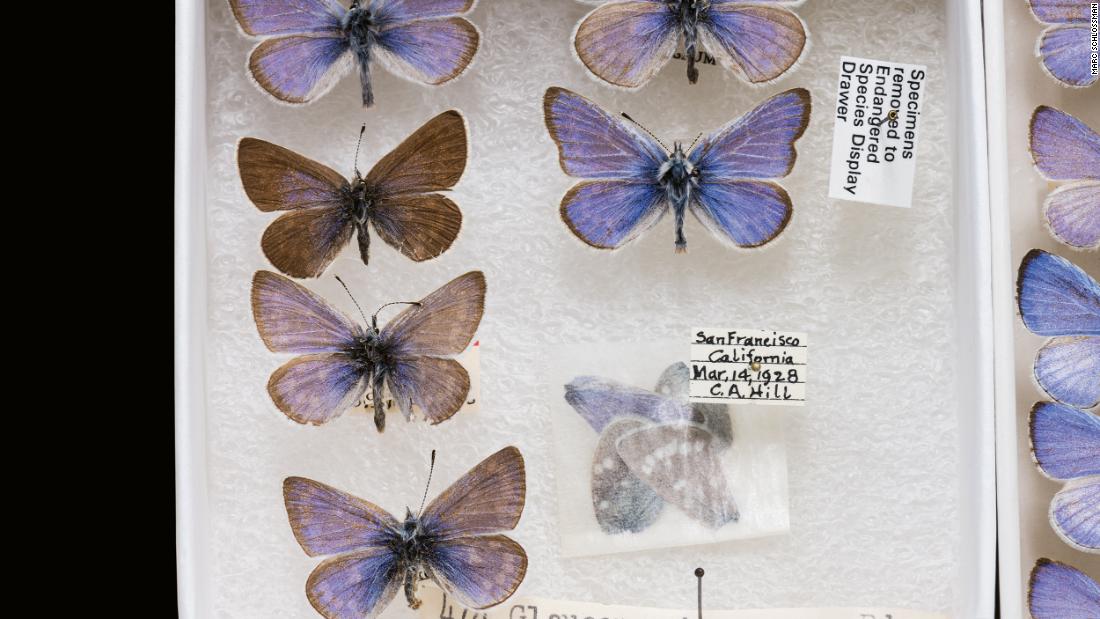 Sign up for CNN’s Wonder Theory science newsletter. Explore the universe with news on fascinating discoveries, scientific advancements and more.

When photographer Marc Schlossman held an extinct, dead bird in his hand, he had what he called a “conversion moment.”

Standing in the birds division of Chicago’s Field Museum with his two young sons in 2008, he realized that the specimen drawer from which the bird was retrieved was the only place someone could see the avian species.

“It was like a punch in the stomach and thinking, ‘We’ve done a lot of damage. What kind of world do we want to live in? Enough is enough,'” said Schlossman, who is based in London.

The experience led Schlossman — who has a background in environmental and travel photography — to ponder why biodiversity loss was happening so fast, whether it was too late to do anything about it and, if not, what could be done? What he uncovered became part of his new photography book, “Extinction: Our Fragile Relationship With Life on Earth.”

Pictured is the cover of “Extinction: Our Fragile Relationship With Life on Earth.” Credit: Marc Schlossman

Through striking photos of specimens captured over nearly 15 years after that transformative museum visit, “Extinction” serves as both a warning and a beacon of hope: It features extinct and endangered animals that have suffered losses due to habitat destruction, hunting, legal and illegal wildlife trading, disease, and other human-driven threats. But Schlossman noted it’s not too late for some of these at-risk species.

Pictured is a Field Museum specimen of a Carolina parakeet, an extinct species once coveted for its colorful feathers and wiped out by disease. Credit: Marc Schlossman

Of the 82 species in the book, 23 are extinct, Schlossman said. “The rest have been brought back from the brink of extinction as conservation successes, or they can be saved with robust conservation work and habitat preservation.”

“We’ve done a lot of damage as a species. But let’s get on with what we need to do, because we’re at a critical point in history.”

A detail of a Floreana giant tortoise specimen from the Field Museum’s collection is shown. The species was hunted to extinction by 1850. Credit: Marc Schlossman

Schlossman’s call to action comes at a pivotal moment as the accelerating loss of global biodiversity threatens the interconnectedness and future of all life forms — including humans.

Biodiversity loss means that even though there are about 8.7 million species on Earth, of which 85% to 90% have yet to be discovered, scientists are in a race against time to understand how the dwindling numbers, variety and genetic variability of species affect ecosystems, according to Thomas Gillespie, a professor in the department of environmental sciences at Emory University in Atlanta.

“We’re losing species potentially quicker than we’re discovering them,” he said, “and before we even realize what their roles are in the ecosystems of the world.”

Schlossman’s ability to document some of these lost species traces back to the 1970s when, as a teenager, he volunteered in the Field Museum’s mammals division for a few summers, he said. After the museum visit with his sons, he approached Field Museum curator John Bates about what he could do as a photographer to tell the stories of certain specimens from the museum’s collection and see where that went.

Through the next decade, he photographed his way through specimens of birds, amphibians, reptiles, fish, mammals, insects and plants. “In any natural history museum, on average, 1% of the collection is on display. I was given access to the 99% you don’t see. … Each collection manager kind of had to agree to it, so it took awhile to get through,” Schlossman said. “I have that relationship with the Field Museum, and the culture of the Field Museum is very progressive.”

The ethos underlying Schlossman’s curation of his book is that every species matters — especially the pollinators involved in the process of bringing food to our tables — but even the “uncharismatic” species, he said.

The rusty patched bumblebee, included in “Extinction,” is one of those crucial pollinators. It once thrived in the United States and Canada but has experienced the most serious decline of any bee species in North America. Scientists have estimated that the critically endangered species has vanished from 87% of its natural range, and in the past decades the population declined by 95%, the book noted.

This specimen of the critically endangered rusty patched bumblebee is from the Field Museum’s collection. Credit: Marc Schlossman

Among some of the extinct species Schlossman photographed, only one specimen was left — as with a small Mexican ray-finned fish, whose inclusion reflected the book’s more harrowing message.

“It was in a tributary that went through Mexico City and, due to urban development, it was put under too much pressure,” Schlossman said.

Urbanization — the concentration of humans into areas transformed for residential, commercial, industrial and transportation purposes — also caused the extinction of the Xerces blue butterfly, last seen in the wild in 1941. It was the first North American butterfly to become extinct due to human actions.

The last known thylacine, or Tasmanian tiger, died in captivity in 1936. This specimen is from the Field Museum’s collection. Credit: Marc Schlossman

As Schlossman worked on his book, themes or patterns of human behaviors revealed themselves. “Why do we need to hunt these things to extinction? What is it about our species that we don’t manage our use of resources in a sustainable way?” he asked.

“We’re poisoning ourselves by acting recklessly in this way of overexploiting natural resources,” Schlossman said. “It’s really important for people to get that. I don’t know how we think we’re going to dodge this bullet that we’re creating for ourselves.”

The Chinese pangolin (specimen from the Field Museum’s collection) is critically endangered due to humans hunting its scales, meat and blood. Credit: Marc Schlossman

A glimmer of hope

Schlossman hopes his images will inspire ideas and optimism for the conservation of remaining species. “Human activities can nurture, as well as harm,” said Jeremy Kerr, professor and chair of the department of biology at the University of Ottawa in Ontario.

Case in point is the success of the California Condor Recovery Program, which Schlossman included in “Extinction” as an example of how human intervention has saved a species. Started in 1975, the initiative is the result of cooperative efforts led by the US Fish and Wildlife Service involving a host of federal and state agencies and nongovernmental organizations.

“The population got down to 22, and they captured them all and they established this captive breeding program. And they encourage the birds to lay two eggs a year to kind of increase the population quickly,” Schlossman said.

“Chicks from the incubator eggs were handled and raised using condor puppets so they did not imprint on humans. So basically, if the condor chick could see a human face, they’d think that was its mother,” he added. “They used condor puppets to raise them. … As of 2020, there were over 500 condors.”

New Zealand kākāpos (specimen from the Field Museum’s collection) have been conserved by a government-supported relocation and recovery program, according to “Extinction.” Credit: Marc Schlossman

‘Get up and fight harder’

Deforestation for the production of beef, soy (produced in large quantities for livestock) and palm oil harms the biodiversity of tropical rain forests and coral reefs, Emory’s Gillespie said. Much of the burden of addressing biodiversity loss falls on big industries and companies, such as agriculture, Schlossman said — but you can do things to help, including changing your diet to reduce the demand for products from those systems.
With habitat preservation being the most crucial antidote to biodiversity loss, you could foster habitats for species such as monarch butterflies — which the International Union for Conservation of Nature declared endangered in July — by growing milkweed, a main food source, Schlossman said.

For bee species, you could reduce the use of pesticides or plant a diverse array of flowers and shrubs in your yard to prevent habitat loss and provide bees with shelter from extreme elements.
If you feel helpless or overwhelmed by these environmental issues, know that it’s not too late to start making changes to build a better future, according to Schlossman. “Anything that happened yesterday or in the days before is gone,” he said. “Eco-anxiety doesn’t make things any better; we just gotta get up and fight harder.”

“Extinction” is available now in the United Kingdom and the US.