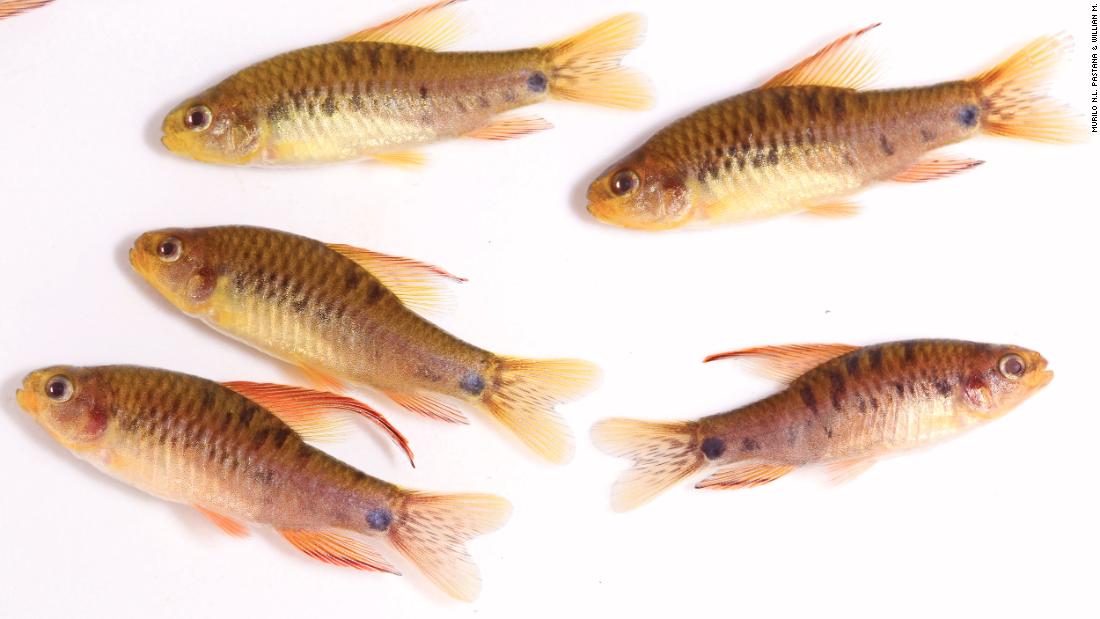 Health, Fitness & Food
Share on Facebook
Share on Twitter
Share on Pinterest
Share on LinkedIn
Sign up for CNN’s Wonder Theory science newsletter. Explore the universe with news on fascinating discoveries, scientific advancements and more.
The fish belong to a subfamily called South American darters. The discovery brings the known number of darter species to five.
One species, Poecilocharax callipterus, is distinguished by its long, striking red-orange fins and a dark spot at the base of its tail.
The other new species, Poecilocharax rhizophilus is the most miniature darter ever identified. This tiny fish only measures about three-quarter inch (2 centimeters) in length as a mature adult. It’s bright yellow with a black stripe along its flanks and has a silver to white belly.
A study describing the two new species, and threats to their environment, published Monday in the Zoological Journal of the Linnean Society.
Deforestation and other human impacts are pushing the Amazon rainforest toward a tipping point that would turn the biologically rich, diverse ecosystem into a grassy savanna — and those stressors can be felt beneath the water’s surface as well as above it.
Study author Murilo Pastana, a postdoctoral research fellow at the Smithsonian National Museum of Natural History in Washington, and his colleagues saw evidence of this during their expeditions between 2015 and 2016.
“It was exciting to find new species,” Pastana said. “But in the field, we saw the forest on fire, logging trucks carrying out huge trees, and cleared patches turned into cattle pasture. This made us feel a lot of urgency to document these species and publish this paper as quickly as possible.”

Pastana, who was born in Brazil, and his colleagues set out on the expeditions, funded by The São Paulo Research Foundation, to better understand the diversity and evolution of fishes like tetras, piranhas and others in the waterways of the Madeira River Basin, which is rich with fish biodiversity.
The researchers packed food, supplies, medicines and scientific instruments for multiple two-week trips, during which the team camped alongside rivers and streams, Pastana said.
“These expeditions are complicated to organize and to attend. Most of the Amazonia is still disconnected from the Brazilian roadmap, and access is only possible by rivers or dirt roads,” he said. “We went to sample places that have never been visited by scientists.”
The area is like a boundary between new cities and the native forest as deforestation pushes north, he said. The region sits about 25 miles (40 kilometers) north of the Brazilian city of Apuí and hosts one of the highest deforestation rates — which meant that the roads that helped Pastana and his colleagues reach the streams, tributaries and ponds are also part of growing habitat loss.
When the researchers dipped their fishing nets and traps into the water, they were stunned to find fish they didn’t recognize.
“The last species of Poecilocharax was described in 1965, more than half a century ago,” Pastana said. “So seeing these fishes in our net was one big ‘wow’ moment.”
The scientists photographed and preserved the fish to study them at the University of São Paulo’s Museum of Zoology.
Poecilocharax callipterus was found in a black water stream, where the waters are stained by tannins leaching from fallen leaves that turn it the color of coffee. Despite a follow-up trip to locate this fish in other waterways, it has only been found in a single stream spanning about 1.5 square miles (4 square kilometers).
The second species, tiny Poecilocharax rhizophilus, was spotted darting among tangled up roots that jut from the banks of muddy streams.
“Miniaturization is uncommon among fishes, and only about 100 of the 2,700 known for the Amazon are considered miniatures,” Pastana said.

Pastana and his coauthors, including Willian Ohara of the Federal University of Rondônia and Priscila Camelier of the Federal University of Bahia, believe the fish could already “be under threat of extinction” and are at risk of becoming endangered.
Given the small and shrinking habitat where the fish are found, and the fact that they may be of interest to the aquarium hobbyist market, Pastana hopes that discovering and naming the species could spur the Brazilian government to pursue conservation efforts.
“Losing either of these species would be like losing priceless masterpieces,” he said.
The data collected by Pastana and his colleagues “should be enough to classify both species as near threatened according to the International Union for Conservation of Nature — and Poecilocharax callipterus could even be classified as critically endangered,” he said.
Meanwhile, the Amazon remains vulnerable as mining, logging and agricultural practices continue — and Pastana is concerned about the lack of action in restricting these illegal activities.
Pastana may be involved in more research to better understand the new fish species, but his main focus “will be given to other species that still lack a name. Some of them come from similarly impacted areas and I hope they get a name before their habitat is destroyed,” he said.
This article was originally published by Cnn.com. Read the original article here.
Share on Facebook
Share on Twitter
Share on Pinterest
Share on LinkedIn