In Israel, a snack called Bamba is credited for a dramatically lower rate of peanut allergy among children.

The morsels of puffed corn resemble Cheetos, except taste like peanut butter. Americans can now buy them in Trader Joe’s.

The idea is that Israeli children are introduced to peanut-based foods at much earlier ages, and that may help kids develop protection from development of peanut allergy. Researchers confirmed that hypothesis in a study published in the New England Journal of Medicine in 2015.

Now, drug companies are seeking to replicate that approach through medicine. Aimmune and DBV Technologies both aim to file for approval of therapies this year that seek to retrain the immune system so it doesn’t overreact to peanuts. Both are examples of the new approaches to preventing potentially life-threatening reactions.

“It’s a huge problem,” said Robert W. Baird analyst Brian Skorney, in an interview with CNBC. “Sending kids to school, they’re not allowed to bring any peanut-based food because there’s almost always at least one kid in class with peanut allergy.”

Public health data support what many parents observe: the prevalence of food allergies, the most common cause of severe reactions known as anaphylaxis, increased by 70 percent in U.S. kids younger than 18 between 1997 and 2016.

Hospital claims for severe allergy reactions have increased, too, by 377 percent from 2007 to 2016, according to a study from FAIR Health.

Researchers cite a handful of potential contributors for the rise in allergies: parents’ reluctance to introduce foods like peanuts too early; the “hygiene hypothesis,” the idea that we’re so clean that our immune systems have too little to do and thus overreact to innocuous stimuli; and that our microbiomes, or gut bacteria, may be out of whack.

“We don’t quite have the answer yet,” said Dr. Julie Wang, professor of pediatrics at the Icahn School of Medicine at Mount Sinai. “Those are areas of active investigation.”

Of all the allergy offenders, peanuts are the worst — at least in terms of the number of people they send to the hospital.

Will Brody, a 13-year-old eighth grader in New York City, knows that firsthand. He had his first reaction when he was a year old, and developed allergies to tree nuts as well. He’s had to use an EpiPen four times to counteract severe reactions.

“One particular episode that I recall, he said: ‘My throat is closing, Mom, I’m having trouble breathing, I just don’t want to die,'” Will’s mom, Joanna Brody, told CNBC.

“I was really scared,” Will added.

So he’s trying the Bamba approach – only he’s doing it through a clinical trial of a product developed by Aimmune.

Every night, Will mixes a packet of peanut powder into his food. Gradually, the dose increases. The idea: establish a tolerance to peanuts over time so that accidental exposure won’t have dire consequences.

“In the beginning, they start you on a very low dose, one one-hundredth of a peanut,” Joanna said. Every two weeks, the dose increased, while Will was monitored in the doctor’s office. “By the end, this past August when they did their last food challenge, he was able to complete the entire challenge.”

Will could tolerate more than 4,000 milligrams of peanut powder, Joanna said, “which is something like 13 peanuts.”

Dr. Jayson Dallas, Aimmune’s chief executive, says a majority of kids in the trial could tolerate at least four peanuts by the end.

“If we treated 10 children, we could get eight of those children through the treatment process and essentially protected from accidental exposure to peanuts out there in the real world,” Dallas said in an interview with CNBC.

Not everyone made it through, though, and that’s because of side effects related to the treatment itself: patients are ingesting the very thing they’re allergic to.

“At first we almost didn’t do it because it was like eating the thing that I was avoiding at all costs for my whole life,” said Will. Occasional stomach aches are the worst side effect, he said.

The up-dosing process takes six months, and patients then stay on a maintenance dose equivalent to about one peanut a day.

Aimmune plans to file for regulatory approval by the end of this year. If it’s successful, Baird’s Skorney estimates the therapy could draw peak sales in 2025 of $1.3 billion worldwide.

It’s not the only new treatment in development, though. On almost a parallel track is French biotech DBV Technologies. It too, delivers a small amount of peanut protein each day, but its treatment has a few significant differences.

First is the delivery method: DBV’s therapy is administered with a patch that’s worn on the child’s back. Next is the dose: Every day, patients are administered the equivalent of one one-thousandth of a peanut via the patch, which is called Viaskin. The dose doesn’t increase the way Aimmune’s does. 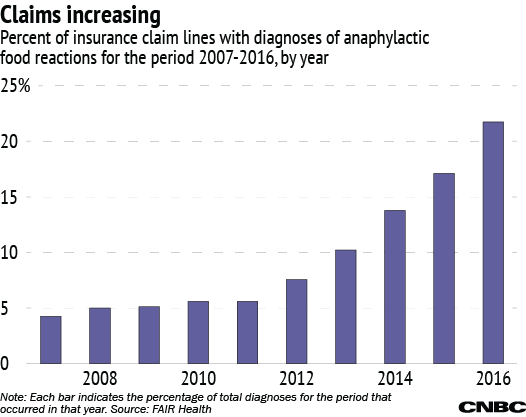 “It slowly desensitizes the child over time,” Kevin Trapp, DBV’s chief commercial officer, told CNBC. “The child is getting about a peanut over three years.”

What kind of protection does that translate into? In late-stage clinical trial results reported last October, DBV found that patients treated with Viaskin could tolerate an average of 900 milligrams of peanut protein after 12 months, compared with 360 milligrams for those on placebo. The study didn’t meet its primary statistical goal, however: a difference in response rates between the active and placebo arms.

Nonetheless, DBV also plans to file for regulatory approval by the end of this year, Trapp said. He notes the therapy is well-tolerated, with some skin reactions where the patch adheres as the main side effects.

Skorney says the choice between Aimmune’s and DBV’s treatments may come down to efficacy versus tolerability.

“When we talk to physicians and families, there’s this gravitation toward Viaskin just in terms of: this is so easy, you just put it on your kid and don’t have to worry too much; you’re not going through the cumbersome and sometimes intolerable step-up process” that Aimmune’s treatment requires, Skorney explained. “But I think you lose some efficacy because of that more modest approach.”

“One of the things I like about Aimmune is you walk out of the physician’s office knowing how much your kid can tolerate,” Skorney said. “The data for Aimmune is much clearer; there’s much more of a magnitude of benefit.”

Smaller biotech companies aren’t the only ones working on new approaches to allergy; biotech giant Regeneron is also making a major push into the field, led by its recently approved medicine, Dupixent.

“It turns out the more specifically you can identify what’s wrong with the immune system and what’s overactive, you can target only that,” Yancopoulos told CNBC in an interview. “This is the definition of precision medicine,” a strategy not often embraced in immune diseases, which he said have been dominated by a more “nuclear approach” using steroids or general immunosuppressants. 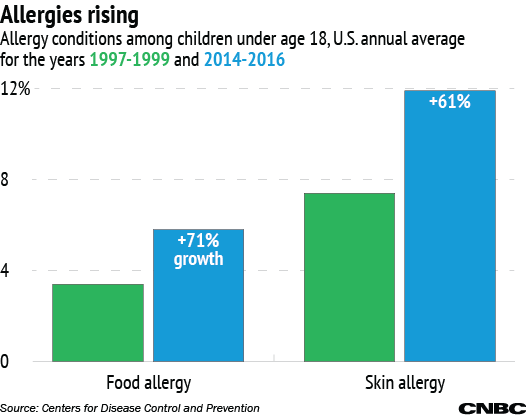 The company’s also testing Dupixent in combination with Aimmune’s peanut allergy treatment. But its approach to allergy doesn’t stop there.

“Can we target the allergen itself?” Jamie Orengo, Regeneron’s director of immunology and inflammation, said in an interview. “We try to develop antibodies that are specific for allergens, so that we can prevent them from even initiating a response.”

In other words, Regeneron is working on determining what it is about cats, or pollen, or peanuts, that triggers allergic reactions, and is developing medicines to block those molecules from irritating the immune system.

“We know what the major driver is from the cat allergen that’s inducing a lot of the symptoms, and we demonstrated this pre-clinically in these labs,” Orengo said. “Then we actually took it into a phase 1 clinical study and showed that patients do have symptomatic relief for their cat allergy.”

How do you test that? Put subjects into a room, and pipe cat dander through the air vents. They call it a “cat room.”

For Orengo, the work is personal. Her three young sons all have asthma and severe allergies.