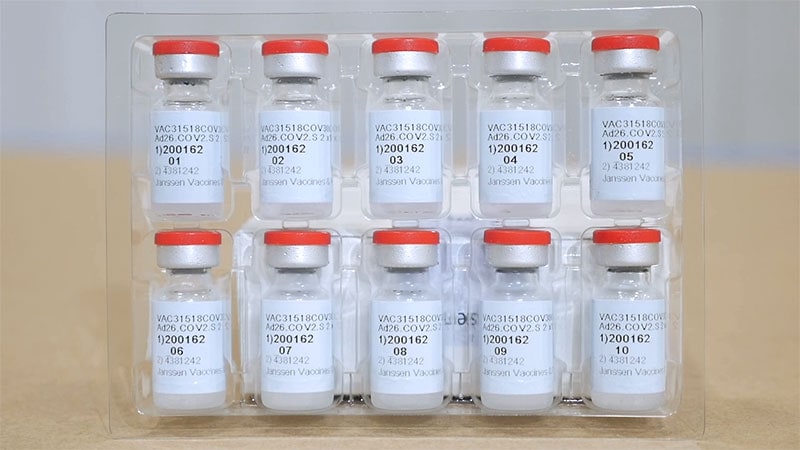 The federal government is shipping 3.9 million doses of Johnson and Johnson’s COVID-19 vaccine starting today, just days after the FDA granted the shot emergency use authorization.

Those doses are all that the company has on hand, White House COVID-19 Response coordinator Jeff Zients said on a call with reporters today. The shipment will be enough to cover 3.9 million Americans since the vaccine is just a single shot.

“That is the entirety of Johnson and Johnson’s inventory,” said Zients. The company said that “the supply will be limited for the next couple of weeks,” he added.

J&J will deliver another 16 million doses by the end of March, he said. That confirms what the company said shortly after Saturday’s FDA authorization. However, said Zients, “we know that J&J distribution and delivery will be uneven across these early weeks in March.”

He added that the company “expects the delivery to be predominantly in the back half of the month.”

The vaccine will be allocated with the same scheme used for the Pfizer/BioNTech and Moderna vaccines — in proportion to a state, territory, city or tribe’s population, said Zients. This week, for instance, New York state will receive 93,700 doses, while the US Virgin Islands will receive 8000 and Washington, DC will receive 6000.

Some have speculated that the J&J vaccine might be given only to more marginalized communities because it is does not require ultra-cold storage and will be easier to administer.

But Zients said the CDC and the federal government continue to emphasize that vaccines should be distributed equitably. The CDC will track vaccine distribution by zip code and using the agency’s social vulnerability index, said Marcella Nunez-Smith, chair of the administration’s COVID-19 Health Equity Task Force.

“Should certain vaccines go consistently to certain communities, we will be able to intervene,” said Nunez-Smith.

Zients also acknowledged that scheduling problems are a limiting factor in getting more Americans vaccinated. “It is too frustrating, and we need to make it better,” he said. “We need to make sure the systems can handle not only the current demand but the projected demand.”

The federal government is working with states to improve scheduling, which might even mean opening call centers, he said.

Meanwhile, CDC Director Rochelle Walensky, MD, said she worries that Americans are letting down their guard when the pandemic is far from over. “I remain deeply concerned about a potential shift in the trajectory of the pandemic,” said Walensky at the briefing.

Declines in cases have “leveled off at a very high number,” she said, plateauing to around 70,000 per day. Deaths have increased 2% in the most recent week to nearly 2000 per day, Walensky said. “Now is not the time to relax the critical safeguards,” she cautioned, adding that Americans have the ability “to stop the fourth surge” of the pandemic.

“Please hear me clearly: At this level of cases, with variants spreading, we stand to completely lose the hard-earned ground we have gained,” she said. Variants are “a very real threat to our people and our progress.”

Anthony Fauci, MD, director of the National Institute of Allergy and Infectious Diseases (NIAID) and President Biden’s chief medical advisor, said the rise of another new variant, B.1.526 — circulating in New York City — is concerning.

“We are certainly taking the New York variant, 526, very seriously,” Fauci said on the call. That variant, first found in the Washington Heights neighborhood of Manhattan — potentially in an immunocompromised person — has “gone through multiple boroughs and is now gaining,” he said.

Studies are looking into whether the variant might be more infectious, or if it might render monoclonal antibody treatments useless, or if it could have an impact on the various COVID-19 vaccines, said Fauci.

But he said immunocompromised individuals should “absolutely” still be vaccinated, for their own health, and to prevent the development of any more variants.

Alicia Ault is a Lutherville, Maryland-based freelance journalist whose work has appeared in publications including Smithsonian.com, the New York Times, and the Washington Post. You can find her on Twitter @aliciaault.