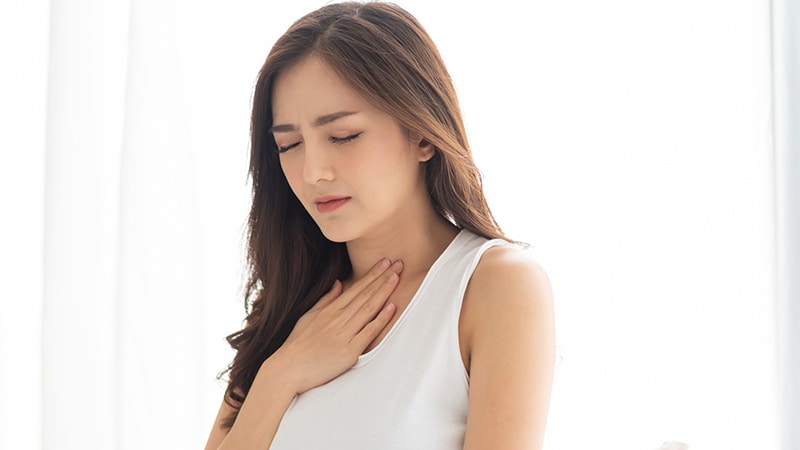 Antireflux lifestyle factors may significantly reduce the risk of gastroesophageal reflux disease (GERD), according to an analysis involving almost 43,000 women.

Even alongside therapy with a proton-pump inhibitor (PPI) and/or a histamine-receptor antagonist (H2RA), adherence to five antireflux lifestyle factors had a meaningful impact on risk for GERD symptoms, possibly preventing nearly 40% of cases with weekly GERD symptoms, reported lead author Raaj S. Mehta, MD, of Massachusetts General Hospital and Harvard Medical School, both in Boston, and colleagues.

“Clinicians recommend dietary and lifestyle modifications to prevent GERD symptoms, but no prospective data are available to inform these recommendations,” Mehta and colleagues wrote in JAMA Internal Medicine.

To address this gap, the investigators turned to the Nurses’ Health Study II, a nationwide, prospective study involving 116,671 women. The study, which has a follow-up rate exceeding 90%, began in 1989 and is ongoing. Participants complete biennial questionnaires that include a variety of health and lifestyle factors. In 2005, 2009, 2013, and 2017, the questionnaire inquired about heartburn or acid reflux.

The present analysis included data from 42,955 women aged 42-62 years. Participants were excluded at baseline if they had cancer, lacked dietary data, were lost to follow-up, already had GERD symptoms at least weekly, or used a PPI and/or H2RA on a regular basis. The final dataset included 392,215 person-years of follow-up, with 9,291 incident cases of GERD symptoms.

For each participant, the presence of five possible antireflux lifestyle factors were added together for a score ranging from 0 to 5: no more than two cups of soda, tea, or coffee per day; never smoking; normal body weight (BMI ≥18.5 and <25.0 kg/m2); “prudent” diet, based on top 40% of dietary pattern score; and at least 30 minutes of moderate to vigorous physical activity each day.

Multivariate logistic regression modeling showed that women who reported all five antireflux lifestyle factors had a 50% decreased risk of GERD symptoms (hazard ratio, 0.50; 95% confidence interval, 0.42-0.59), compared with women who adhered to none of them. Further analysis suggested that the collective effect of all five factors could reduce GERD symptom case volume by 37% (95% CI, 28%-46%).

Nonadherence to each antireflux lifestyle factor was independently associated with an increased risk of GERD symptoms. After mutual adjustment for other variables, BMI was associated with the highest population-attributable risk (19%), followed by physical activity (8%), food intake (7%), beverage intake (4%), and nonsmoker status (3%).

One limitation of the study was that its population was primarily White women; however, the authors noted a study suggesting GERD is more common in White women aged 30-60 years.

“Adherence to an antireflux lifestyle, even among regular users of PPIs and/or H2RAs, was associated with a decreased risk of GERD symptoms,” the investigators concluded.

According to Ronnie Fass, MD, medical director of the Digestive Health Center at Case Western Reserve University, Cleveland, “This is the first study to show the incremental effect and thus the benefit of lifestyle factors in reducing the risk of GERD symptoms. While only five lifestyle factors were assessed in this study, potentially others may further decrease the risk for symptoms.”

Fass suggested that the nature of the data, which was self-reported, and the entirely female patient population, should inform interpretation of the findings.

Yet Fass concluded by again emphasizing the merit of the analysis: “This is an important study that further supports the value of certain lifestyle factors in reducing the risk of GERD symptoms,” he said. “What is challenging for practicing physicians is to get patients to follow these lifestyle factors long term.”

The study was funded by the National Institutes of Health and by a Stuart and Suzanne Steele Massachusetts General Hospital Research Scholar Award. The investigators and Fass disclosed no conflicts of interest.