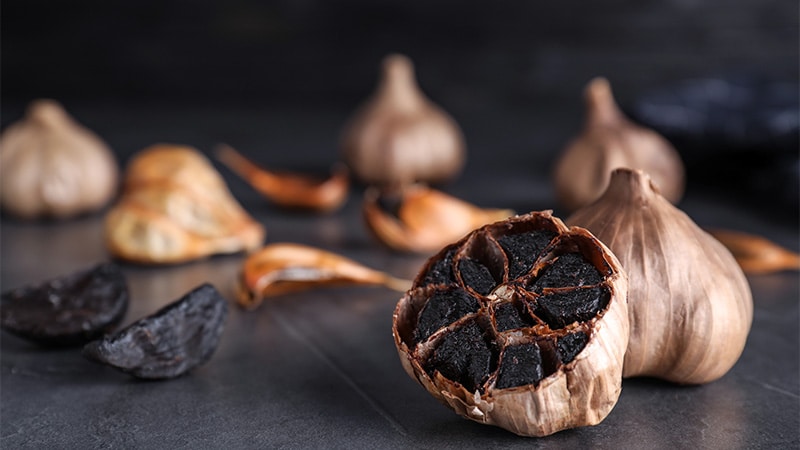 After 6 weeks, consumption of ABG with a high concentration of s-allyl-L-cystine (SAC) was associated with a nearly 6-mm Hg reduction in DBP in men. Other cardiovascular disease (CVD) risk factors were not significantly affected.

“The observed reduction in DBP by ABG extract was similar to the effects of dietary approaches, including the effects of the Dietary Approaches to Stop Hypertension (DASH) diet on BP,” say Rosa M. Valls, PhD, Universitat Rovira i Virgili, Reus, Spain, and colleagues.

“The potential beneficial effects of ABG may contribute to obtaining an optimal DBP” but were “better observed in men and in nonoptimal DBP populations,” they write in the study, published in Nutrients.

Pure SAC and aged garlics have shown healthy effects on multiple targets in in vitro and in vivo tests. However, previous studies in humans have not focused on ABG but rather on other types of aged garlic in patients with some type of CVD risk factor and suffered from methodologic or design weaknesses, the authors note.

To address this gap, Valls and colleagues randomly assigned 67 individuals with moderate hypercholesterolemia (defined as LDL levels of at least 115 mg/dL) to receive one ABG tablet (250 mg ABG extract/1.25 mg SAC) or placebo daily for 6 weeks. Following a 3-week washout, the groups were reversed and the new intervention continued for another 6 weeks.

Participants received dietary recommendations regarding CVD risk factors and had their dietary habits assessed through a 3-day food record at baseline and after 6 weeks during both treatments.

Individuals receiving lipid-lowering treatment or antihypertensives were excluded, as were those with a body mass index of 35 kg/m2 or higher, a fasting blood glucose of at least 126 mg/dL, or were active smokers.

There were no differences in baseline characteristics between the two groups. The mean systolic and diastolic pressures at baseline were 124/75 mm Hg in the ABG group and 121/74 mm Hg in the placebo group. Their mean age was 53 years.

Adherence with the protocol was “high” at 96.5% in both groups, and no adverse effects were reported.

Although no significant differences between ABG and placebo were observed at 3 weeks, the decline in DBP after consumption of the ABG extract became significant at 6 weeks (mean change, -3.7 mm Hg vs -0.10 mm Hg; P = .007).

When stratified by sex and categories of DBP, the mean change in DBP after 6 weeks of ABG consumption was particularly prominent in men and in those with a baseline DBP of at least 75 mm Hg.

At week 6, total cholesterol levels showed a “quadratic decreasing trend” after ABG treatment (P = .047), but no other significant differences between groups were observed for lipid profile, apolipoproteins, or other outcomes of interest, including serum insulin, waist circumference, and body mass index.

The authors note that although systolic BP elevation “has a greater effect on outcomes, both systolic and diastolic hypertension independently influence the risk of adverse cardiovascular events, regardless of the definition of hypertension” and that the risk of death from ischemic heart disease and stroke doubles with every 10 mm Hg increase in DBP in people between the ages of 40 and 89 years.

Commenting for theheart.org | Medscape Cardiology, Linda Van Horn, PhD, RDN, professor and chief of the Department of Preventive Medicine’s Nutrition Division, Northwestern University, Chicago, said that for many years, garlic has been “reported to be an adjunct to the benefits of a healthy eating pattern, with inconclusive results.”

She noted that ABG is “literally aged for many months to years, and the resulting concentrate is found higher in many organosulfur compounds and phytochemicals that suggest enhanced response.”

Van Horn, a member of the American Heart Association’s Nutrition Committee, who was not involved with the study, continued: “The data suggest that ABG that is much more highly concentrated than fresh or processed garlic might be helpful in lowering BP in certain subgroups, in this case men with higher BP.”

However, she cautioned, “these results are limited in a small study, and…potential other issues, such as sodium, potassium, or other nutrients known to be associated with blood pressure, were not reported, thereby raising questions about the exclusivity of the ABG over other accompanying dietary factors.”

The study was funded by the Center for the Development of Industrial Technology of the Spanish Ministry of Science and Innovation. Two authors are employees of Pharmactive Biotech Products, SL (Madrid, Spain), which manufactured the ABG product, but neither played a role in any result or conclusion. The other authors and Van Horn report no relevant financial relationships.

More than half of early Covid patients at one hospital had symptoms two years later
Creativity and the pandemic – is there a connection?
Four Strange COVID Symptoms You Might Not Have Heard About
UMSOM researchers participate in Big Ten health registry to learn about cardiac issues in athletes recovering from COVID-19
House Democrats to hold hearings on baby formula crisis, introduce bill to beef up FDA inspections