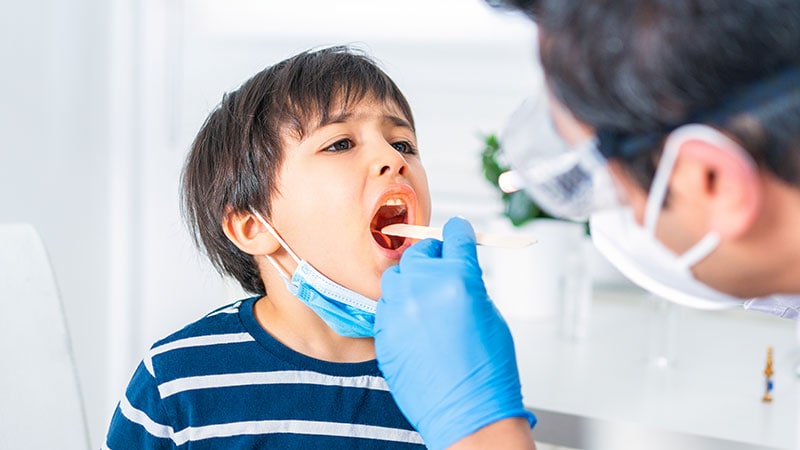 Adding anti-inflammatory corticosteroids to antibiotics for certain pediatric throat and ocular infections may have some benefit, according to results from two recent database studies, but their benefit remains unclear.

Using steroids in this setting is a practice many pediatricians consider, although no clear guidance exists.

Drawing on data from a registry of 51 free-standing children’s hospitals in the Pediatric Health Information System (PHIS), and published online in Pediatrics, the analyses looked, respectively, at retro- and parapharyngeal abscesses (RPAs/PPAs) and  acute orbital cellulitis.

In the first study, pediatrician Pratichi K. Goenka, MD, of Cohen Children’s Medical Center–Northwell Health and an assistant professor at Hofstra University, both in New Hyde Park, N.Y., and colleagues reported on the effect of systemic corticosteroids on several outcomes in RPAs/PPAs in 2,259 well-matched patients. The patients, aged 2 months to 8 years, were treated at 46 hospitals during the period from January 2016 to December 2019.

Those in the steroid group also had lower overall hospital costs and were less likely to be given opioid medications for pain. They were, however, more likely to undergo repeat CT imaging and also had a higher 7-day ED revisit rate but no increase in readmission 30 days after discharge: 4% versus 3% in the nonsteroid group (P = .29).

“As hospitalists, we share the care of young children with RPAs and PPAs with our otolaryngology colleagues. The primary therapy is antibiotics but there was no clear guidance on the next step, and the current literature had no answers as to how systemic corticosteroids might impact the care of these children,” Goenka said in an interview. “So we wanted to leverage the PHIS data to better understand the association with the need for surgery and length of stay. Surgery is painful and often involves IV administration of opioid painkillers. It’s something we may be able to avoid if we can optimize medical treatment.”

Pending results from randomized trials, what immediate impact could these registry findings have? “We hope that physicians will think about the best initial medical treatment plan for these children,” Goenka said. “Given these data, I would be more likely to incorporate steroids early on in medical treatment.”

She emphasized, however, that before routine adoption prospective studies are needed to clearly identify which patients will have a strong benefit and which will not benefit. “That is the nuanced discussion that will happen with more prospective work.”

Goenka and associates explained that the rising incidence of RPAs and PPAs over the past 20 years has been attributed to more cases of tonsillitis because of a shift away from tonsillectomies, as well as the changing epidemiology of methicillin-resistant Staphylococcus aureus.

In an accompanying editorial, Ellen R. Wald, MD, and Jens C. Eickhoff, PhD, of the University of Wisconsin–Madison, stated that the use of corticosteroids in bacterial meningitis is often cited as an example of the benefits of steroids in infection. “The specific rationale for use of corticosteroids is [their] anti-inflammatory effects, which may result in decreases of swelling and/ or edema to facilitate drainage, perfusion, reduction in pain, and healing.”

They cautioned, however, that the pharmacologic effects of steroids are myriad and complicated, and include potential masking of the clinical course of disease, thereby delaying appropriate therapy for unrecognized deterioration, as well potential immunosuppression.

In the second retrospective analysis, a group led by pediatrician Maria Anna Leszczynska, MD, of Johns Hopkins All Children’s Hospital in Baltimore, analyzed a retrospective PHIS cohort of 5,645 children younger than 18 years with a primary diagnosis of orbital cellulitis treated at 51 hospitals from January 2007 to December 2018.

“Among children hospitalized for orbital cellulitis, we did not observe the reduction in LOS [length of stay] for patients prescribed systemic corticosteroids as described previously in the literature,” the authors wrote.

According to the editorialists: “Both observations suggest that children who received steroids may have been a sicker group of patients.”

Wald and Eickhoff pointed out that the effect of steroids is ultimately unclear because of the retrospective study’s inherent potential for bias because of unobserved confounders. Were steroids prescribed more often when children were perceived to be sicker with more severe disease, or did these medications cause worse outcomes?

The authors agreed that the study could not determine causality. “Although we used all available markers of disease severity, there does not exist a validated disease severity clinical score for pediatric orbital cellulitis,” they wrote.

According to Ricardo A. Quinonez, MD, an associate professor of pediatrics and division and service chief of pediatric hospital medicine at Baylor College of Medicine and Texas Children’s Hospital, both in Houston, “orbital cellulitis is a not very common thing in children so we don’t treat many patients with this. But having said that, there is usually some debate among providers about whether to use steroids.”

Some centers use them routinely for central nervous system and eye infections or extensions of sinusitis, he said, but there is variability in the prescribing of corticosteroids. “There’s ongoing discussion as to whether they’re as helpful in orbital cellulitis as they are in similar conditions,” Quinonez said in an interview. “At our institution we don’t typically prescribe them – not never but not routinely. Children who are sicker tend to get steroids, as they do in other conditions.”

In the context of PPA as in the first study, he added, “I think the evidence favoring the use of steroids in infections that affect the airway is stronger, and their use is definitely more prevalent in those instances.”

While both PHIS analyses suggested some benefit from steroids, he continued, some children may not benefit and there may be harms. “The evidence is still mostly retrospective and observational with no multicenter randomized controlled data. Without those data the evidence is difficult to interpret and subject to all the biases that observational and retrospective data is subject to and the current evidence should not lead physicians to change their practice until controlled, randomized evidence is available.”

The editorialists concurred with the study authors and Quinonez that large, controlled, prospective clinical trials are needed to ascertain the effect of steroids and to standardize the approach to diagnosis and management. “Use of administrative databases are not optimal to answer questions related to outcome,” they wrote.