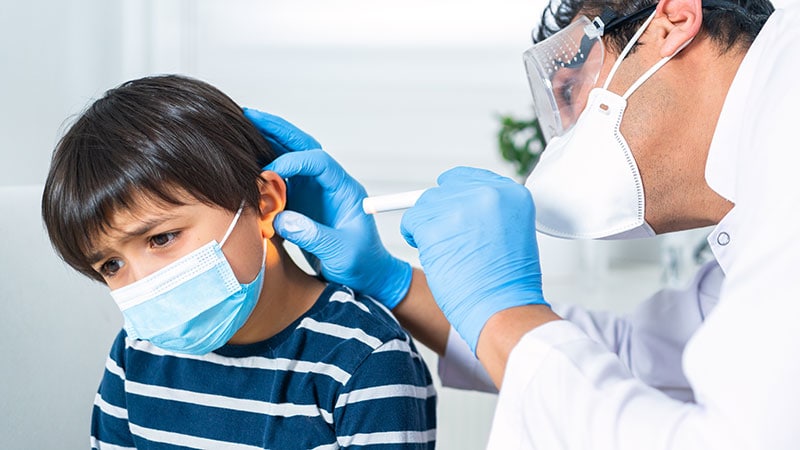 Children from socially disadvantaged backgrounds are less likely to be treated for middle ear infections and are likely to experience serious complications from the condition — potentially with lifelong economic consequences — researchers have found.

Problems such as hearing loss and chronic ear infections were more common for children who lived in areas marked by difficult socioeconomic circumstances, according to the researchers, who linked the complications to a lack of adequate treatment in this population.

“We are treating socially disadvantaged kids differently than we are treating more advantaged kids,” said Jason Qian, MD, a resident in otolaryngology and head and neck surgery at Stanford University, in California, who helped conduct the new study. “We have to think about social inequalities so we can ensure all kids are receiving the same level and type of care.”

In the United States, 80% of children will experience otitis media during their lifetime. Untreated ear infections can lead to symptoms ranging from mild discharge from the ear to life-threatening conditions like mastoiditis and intracranial abscesses.

For the new study, published online November 10 in JAMA Otolaryngology–Head & Neck Surgery, Qian and colleagues looked at 4.8 million children with private health insurance across the United States using a database with information on inpatient and outpatient visits and medication use. The researchers identified patients between January 2003 and March 2021 who received treatment for recurrent and suppurative otitis media, those who received tympanostomy tubes, and children who experienced severe complications from undertreated ear infections.

Social disadvantage was assessed using the Social Deprivation Index (SDI), a tool used to measure indicators of poverty throughout the United States based on seven demographic factors including level of educational attainment, the number of single-parent households, the share of people living in overcrowded homes, and other factors.

Every point increase in the SDI score was associated with a 14% lower likelihood of being treated for recurrent ear infections despite having them and a 28% greater chance of being hospitalized for severe ear infections, according to the researchers.

Previous research established that children with government health insurance or no coverage have more difficulty receiving proper treatment for ear infections. Although people with commercial insurance are generally wealthier than those without private coverage, Qian said, the new data indicate that significant social disparities in care exist even within this group.

Although some studies have found that wealthier children are more likely to develop otitis media, Qian’s group said that association likely reflects the better access to healthcare money affords.

“We found that socially disadvantaged children not only have a higher burden of otitis media but are also undertreated both medically and surgically for [ear infections]. Because chronic and complicated forms of otitis media can cause childhood hearing loss, which in turn limits academic and economic potential, undertreatment of [otitis media] in socially disadvantaged populations can contribute to generational cycles of poverty, unemployment, and low pay,” they write.

“The biggest take home is that we are not treating children equitably when it comes to ear infections,” Qian added. “In order to give children equal access to care, we as healthcare providers need to find strategies to do better.”

The study was supported by the  Stanford Center for Population Health Science Data Core, which is supported by a grant from the National Institutes of Health and internal funding. Qian has reported receiving grant funding from Merck.