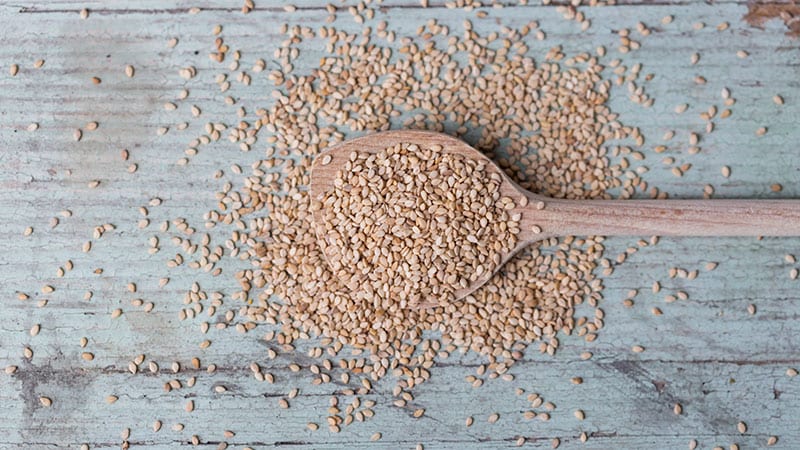 Among people who reported an allergic reaction to sesame in a survey, more than half (56%) of the triggering foods did not declare sesame on the label.

The findings were published online last month in Annals of Allergy, Asthma and Immunology.

Sometimes, the study found, labels list sesame ingredients under other names, such as “tahini,” a sesame product and one of the main ingredients in hummus. But because the actual word “sesame” does not appear, some consumers don’t recognize it as an allergen, the authors note. Some labels on products with sesame just list “spices or natural flavor” and don’t specify particular ingredients in the spices, such as sesame.

Clear and specific labeling for sesame is crucial to prevent severe reactions, especially anaphylaxis, in people with food allergies, the authors conclude.

The study examined 379 events related to sesame reported by 327 people with 360 distinct adverse clinical reactions. Anaphylaxis occurred in 68.9% of reactions; hospitalization occurred in 47.8% of events; and epinephrine was administered in 36.4%. Most of the reports (85%) were from parents reporting events from their children.

Events involving a packaged food product occurred in 67.5% of events. An alternate name was noted in 46% of products that did not include “sesame” on labeling.

In almost all the cases (99%), those reporting a sesame reaction ingested the food rather than having contact-only exposure.

She said since doing the study she has worked harder to spread the word with patients and with friends and the general public about alternative names for sesame to boost awareness.

“It’s eye-opening both from a scientific interest standpoint but also from a public health standpoint,” she said.

“There’s always room for improvement on our end for education,” she said.

Nguyen said the survey originally was intended to support passage of the Food Allergy Safety, Treatment, Education & Research (FASTER) Act, which added sesame to eight other top allergens that must be clearly labeled to disclose the allergen.

In April 2021, Congress passed the FASTER Act. It states that sesame inclusion must be clear on labels by 2023.

“Our data continue to support that,” Nguyen said.

Matthew Greenhawt, MD, director of Food Challenge and Research at Children’s Hospital Colorado in Aurora, said that among patients at his center, the problem is not so much the synonyms for sesame. Instead, it’s labels that leave out sesame or related ingredients altogether.

“This may reflect differences between patients who respond to online surveys through Facebook and advocacy groups, and those seen at an academic referral center,” said Greenhawt, who was not part of the study.

He said he was surprised by the number of reported reactions attributed to poor recognition of tahini as a form of sesame. While he said that might be more understandable in an initial reaction, it would be somewhat surprising on a repeat reaction, especially if the patient had been evaluated by an allergist.

“However, it is hard to determine if these were initial or subsequent reactions from this study,” he noted.

It’s been a lengthy effort for sesame to get recognized as a major allergen, Corinne Keet, MD, professor of pediatric allergy/immunology at the University of North Carolina at Chapel Hill, who was not part of the study, told Medscape Medical News.

Keet said allergists try to educate patients and their families on what synonyms for sesame to look for on labels, but that can be difficult. She mentioned another food — halva — a sweet mixture often made with sesame and sugar, which is also often not recognized to contain sesame.

“The problem is that in different cultures, they call things by different names,” she said.

She recommends the Food Allergy Research and Education website for further information on which foods contain sesame.

She noted that the study looked only at labeling on the products consumed by people who had reactions to sesame and should not be seen as representative of all insufficient sesame labeling.

“The data come from self-reported surveys, where it is very difficult to definitively verify the information as valid per se,” he noted. “This is a major limitation of self-reported data, though I think the group handled this limitation well. There is also

some element of selection bias and recall bias from the online survey methodology, which may mean these data are not reflective of the general food allergic population.”

But he added, “One immediately implementable finding from this study is that every allergist assessing a patient for sesame allergy can educate patients that tahini is a form of sesame, as the high percent of reactions from poor recognition of tahini as sesame can be immediately corrected.”

Kennedy said improving labeling in the US lags efforts in some other countries.

“If you travel in Europe and you look at their food allergy labeling in restaurants and on menus, it’s astounding,” she said.

Kennedy and Nguyen credited their colleagues at Center for Science in the Public Interest, in Washington, DC, with the original design of the survey.

A study coauthor reports funding from individual donors Christine Olsen and Robert Small for Center for Science in the Public Interest’s work related to a 2014 petition to the FDA requesting additional labeling protections for sesame allergy. The other authors and Keet have disclosed no relevant financial relationships. Greenhawt is a consultant for Aquestive and is a member of physician/medical advisory boards for DBV Technologies, Sanofi/Regeneron, Genentech, Nutricia, Novartis, Acquestive, Allergy Therapeutics, AstraZeneca, ALK-Abello, Pfizer, US World Meds, Allergenis, Aravax, and Prota. He is an unpaid member of the scientific advisory council for the National Peanut Board and medical advisory board of the International Food Protein Induced Enterocolitis Syndrome Association; is a member of the Brighton Collaboration Criteria Vaccine Anaphylaxis 2.0 working group; is the senior associate editor for the Annals of Allergy, Asthma, and Immunology, and is member of the Joint Taskforce on Allergy Practice Parameters.