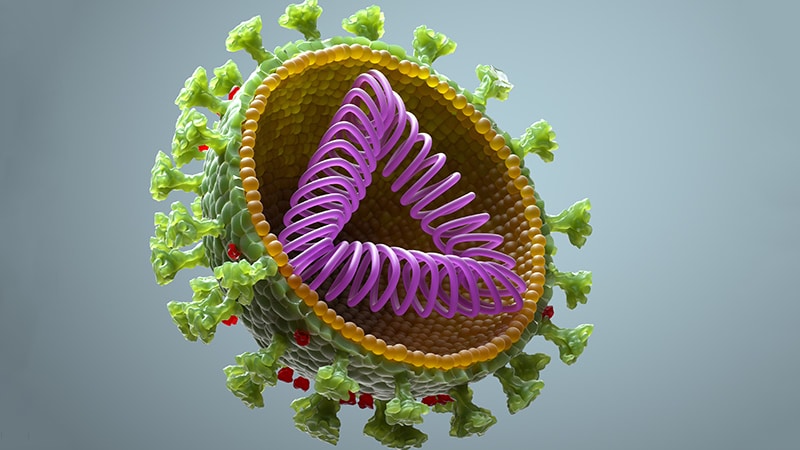 Catherine O’Neal, MD, an infectious disease physician, took to the podium of the Louisiana governor’s press conference on July 16 and did not mince words.

“The delta variant is not last year’s virus, and it’s become incredibly apparent to healthcare workers that we are dealing with a different beast,” she said.

Louisiana has one of the least vaccinated states in the country. In the United States as a whole, 48.6% of the population is fully vaccinated. In Louisiana, it’s just 36%, and delta is bearing down.

O’Neal spoke about the pressure rising COVID cases were already putting on her hospital, Our Lady of the Lake Regional Health System, in Baton Rouge. She talked about watching her peers, 30 and 40-year-olds become severely ill with the latest iteration of the new coronavirus—the delta variant—which is sweeping through the US with astonishing speed, causing new cases, hospitalizations, and deaths to rise again.

O’Neal talked about parents who might not be alive to see their children go off to college in a few weeks.  She talked about increasing hospital admissions for infected kids and pregnant women on ventilators.

“I want to be clear after seeing what we’ve seen the last two weeks. We only have two choices: We are either going to get vaccinated and end the pandemic, or we’re going to accept death and a lot of it,” O’Neal said, her voice choked by emotion.

Delta was first identified in India, where it caused a devastating surge in the spring, In a population that was largely unvaccinated, researchers think it may have caused as many as 3 million deaths. In just a few months’ time, it has sped across the globe.

Research from the UK shows that delta is highly contagious. It’s about 60% more easily passed from person-to-person than the alpha version (or B.1.1.7, which was first identified in the UK).

Where a single infected person might have spread older versions of the virus to 2 or 3 others, mathematician and epidemiologist Adam Kucharski, PhD, an associate professor at the London School of Hygiene and Tropical Medicine, thinks that number—called the basic reproduction number– might be around 6 for delta, meaning that on average, each infected person spreads the virus to 6 others.

“The delta variant is the most able and fastest and fittest of those viruses,” said  Mike Ryan, MD, MPH, executive director of the World Health Organization’s health emergencies program, in a recent press briefing. Early evidence suggests it may also cause more severe disease in people who are not vaccinated.

In a study published ahead of peer review, Tuite and her co-author, David Fisman, PhD, reviewed the health outcomes for more than 200,000 people who tested positive for SARS-CoV2 in Ontario between February and June of 2021. Starting in February, Ontario began screening all positive COVID tests for mutations in the N501Y region for signs of mutation.

Emerging evidence from England and Scotland, analyzed by Public Health England, also show an increased risk for hospitalization with delta. The increases are in line with the Canadian data.  Experts caution that the picture may change over time as more evidence is gathered.

“What is causing that? We don’t know,” Tuite said.

The delta variants (there’s actually more than one in the same viral family), have about 15 different mutations compared to the original virus. Two of these, L452R and E484Q, are mutations to the spike protein that were first flagged as problematic in other variants because they appear to help the virus escape the antibodies we make to fight it.

It has another mutation away from its binding site that’s also getting researchers’ attention – P681R.

This mutation appears to enhance the “springiness” of the parts of the virus that dock onto our cells, said Alexander Greninger, MD, PhD, assistant director of the UW Medicine Clinical Virology Laboratory at the University of Washington in Seattle.  So it’s more likely to be in the right position to infect your cells if you come into contact with it.

Another theory is that P681R may also enhance the virus’s ability to fuse cells together into clumps that have several different nuclei. These balls of fused cells are called syncytia.

“So it turns into a big factory for making viruses,” said Kamron Kadkhoda, PhD, medical director of immunopathology at the Cleveland Clinic, in Ohio.

This capability is not unique to delta or even to the new coronavirus.  Earlier versions and other viruses can do the same thing, but according to a recent paper in Nature, the syncytia that delta creates are larger than the ones created by previous variants.

Scientists aren’t sure what these supersized syncytia mean, exactly, but they have some theories. They may help the virus to copy itself more quickly, so a person’s viral load builds up quickly. That may enhance the ability of the virus to transmit from person to person.

And at least one recent study from China supports this idea. That study, which was posted ahead of peer review on the website Virological.org, tracked 167 people infected with delta back to a single index case.

China has used extensive contact tracing to identify people that may have been exposed to the virus and sequester them quickly to tamp down its spread. Once a person is isolated or quarantined, they are tested daily with gold-standard PCR testing to determine whether or not they were infected.

Researchers compared delta cases to the characteristics of people infected in 2020 with previous versions of the virus.

When people tested positive, they had more than 1000 times more virus in their bodies, suggesting the delta variant has a higher growth rate in the body.

This gives delta a big advantage. According to Angie Rassumussen, PhD, a virologist at the Vaccine and Infectious Disease Center at the University of Saskatchewan, in Canada, who posted a thread about the study on Twitter, if people are shedding 1000 times more virus, it’s much more likely that close contacts will be exposed to enough of itto become infected themselves.

And if they’re shedding earlier in the course of their infections, the virus has more opportunity to spread.

This may help explain why delta is so much more contagious.

Beyond transmission, delta’s ability to form syncytia may have two other important consequences.  It may help the virus hide from our immune system, and it may make the virus more damaging to the body.

Commonly, when a virus infects a cell, it will corrupt the cell’s protein making machinery to crank out more copies of itself. When the cell dies, these new copies are released into the plasma outside the cell where they can float over and infect new cells. It’s in this extracellular space where a virus can also be attacked by the antibodies our immune system makes to fight it off.

“Antibodies don’t penetrate inside the cell. If these viruses are going from one cell to another by just fusing to each other, antibodies become less useful,” Kadkhoda said.

Recent studies show that delta is also able to escape antibodies made in response to vaccination more effectively than the Alpha, or B.1.1.7 strain.  The effect was more pronounced in older adults, who tend to have weaker responses to vaccines in general.

After two doses, the vaccines are still highly effective—even against delta—reaching 80% protection for illness, and 94% for hospitalization, which is why US officials are begging people to get both doses of their shots, and do it as quickly as possible.

Finally, the virus’s ability form syncytia may leave greater damage behind in the body’s tissues and organs.

“Especially in the lungs,” Kadkhoda said.  The lungs are very fragile tissues. Their tiny air sacs—the aveoli–are only a single cell thick.  They have to be very thin to exchange oxygen in the blood.

“Any damage like that can severely affect any oxygen exchange and the normal housekeeping activities of that tissue,” he said. “In those vital organs, it may be very problematic.”

The research is still early, but studies in animals and cell lines are backing up what doctors say they are seeing in hospitalized patients.

Another investigation, from researchers in India, infected two groups of hamsters—one with the original “wild type” strain of the virus, the other with the delta variant of the new coronavirus.

German researchers working with pseudotyped versions of the new coronavirus—viruses that have been genetically changed to make them safer to work with—watched what happened after they used these pseudoviruses to infect lung, colon, and kidney cells in the lab.

Researchers say it’s important to remember that while interesting, this research isn’t conclusive. Hamsters and cells aren’t humans.  More studies are needed to prove these theories.

Scientists say what we already know about delta makes vaccination more important than ever.

”The net effect is really that, you know, this is worrisome in people who are unvaccinated and then people who have breakthrough infections, but it’s not …’ a reason to panic or to throw up our hands and say you know, this pandemic is never going to end,” Tuite said, “Because what we do see is that the vaccines continue to be highly protective.”

Long COVID: With One In Three Patients Back In Hospital After Three Months, Where Are The Treatments?
Study finds link between residential proximity to oil and gas drilling and lower birthweights in infants
Improving cancer care for the LGBTQ+ community
From body neutrality to body positivity: Putting language to your body image goals
Novel therapeutic agent could be effective for treating cancers with certain gene mutations