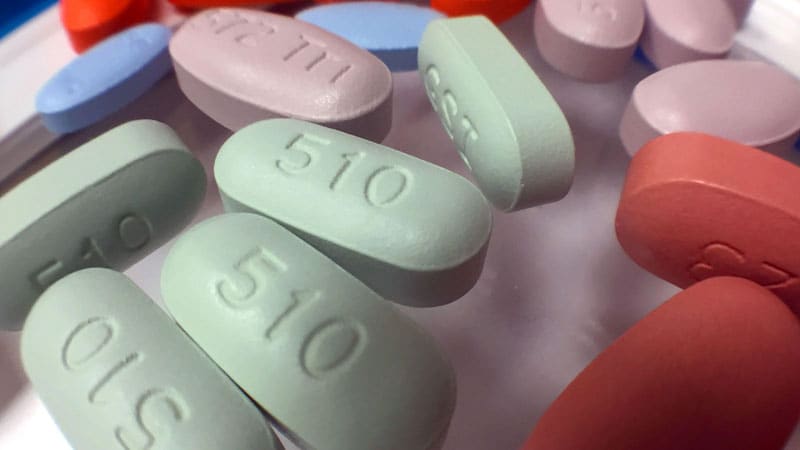 This is a jump of 20% since 2012, and part of a greater trend toward better early ART prescription for Black people and those residing in the southern region of the United States with HIV, according to new data from the Centers for Disease Control and Prevention (CDC).

The data, presented at the Conference on Retroviruses and Opportunistic Infections (CROI) 2021, highlighted one major blind spot in clinicians’ timely prescribing of ART, however. Despite the overall improvements, from 2016 to 2018, people with a diagnosis of drug use disorder were still 28% less likely than those without such a diagnosis to receive ART in a timely fashion. These data, therefore, are a call to action, Jun Li, MD PhD, a CDC epidemiologist, told Medscape Medical News.

“Healthcare providers should follow the standardized protocol to screen for substance use disorders when patients first enter HIV care and link patients with the disorder to medication-assisted treatment, providing medications in combination with counseling and behavioral therapies, as appropriate,” Li explained.

Researchers culled data on 11,853 people living with HIV from the North American AIDS Cohort Collaboration on Research and Design (NA-ACCORD). The participants entered HIV care between January 2012 and December 2018, and had at least two clinic visits within 12 months of each other. People with clinical AIDS diagnoses more than 30 days before entering care and those with a history of having received ART previously were excluded from the study. Participants could be included, though, if they had a new diagnosis of AIDS (<200 copies/mL of CD4) and/or an AIDS-defining illness at baseline.

Participants reflected the HIV epidemic overall: 45% were Black, 15% were Latino, 51% lived in the South, and 77% were younger than 50 years. In addition, 48% of participants were gay or bisexual men. More than one in 10 (11%) had a history of drug use disorder, and 24% had a mental health diagnosis. What’s more, 5% of participants had a diagnosis of AIDS at their first clinic visit and 70% had CD4 counts of less than 500 cells/μL, indicating chronic and untreated HIV.

The goal was to see how trends changed in early access ART over the 6 years of the analysis period. The study defined timely receipt of ART as receiving a prescription for ART within 30 days of first visit. Thirty days is the CDC’s recommendation for rapid ART initiation, but is much longer than programs in some American cities, which aim to get people a prescription in less than week. San Francisco, for instance, aims to get people newly diagnosed with HIV on treatment within 5 days, but shortens that time to 48 hours if the person’s labs suggest either presence of AIDS or tests showing that the infection is in its earliest stages.

Once Li and colleagues had those data, they started their analysis, examining the results by CD4 level across the full 6 years, and by race and ethnicity, history of drug use disorder, and by region of the country, broken down into two time periods: 2012 to 2015 and 2016 to 2018.

What they found was that 6,688 (56.4%) of the 11,853 participants experienced undetectable viral loads within that 30-day follow-up window. The median number of days to receipt of an ART prescription was 9 days.

When they broke the results down by CD4 levels, the trend held, although people who started treatment with CD4 counts of less than 200 copies saw their progress stall in 2017 and 2018. Still, all improvements were statistically significant, said Li.

Overall, white Americans, people living in the Northeast, and gay and bisexual men had the highest rates of timely ART prescriptions in an epidemic that’s increasingly southern and Black. When researchers looked at ART prescriptions over the full 6 years, they found that Black people with HIV were 11% less likely to be offered ART quickly than their White peers, and that people in the South were 22% less likely to be offered rapid ART than their contemporaries living in the Western United States.

When they looked further at the race data, they saw that those disparities were largely driven by significantly lower rates of timely ART for Black people with HIV from 2012 to 2015. By 2016 to 2018, not only had the overall rate of early ART prescriptions risen for everyone, it had made the gap between Black and White insignificant. The same happened for people in the South. In the early years of the study period, people in the South were 28% less likely to receive timely ART than their contemporaries in the West. But from 2016 to 2018, people in the South were nearly as likely to receive timely ART (a 3% lower odds of ART prescription within 30 days).

The Care Gap for People With Drug Use Disorder

These findings led Josh Barocas, MD, from the Boston University School of Medicine, to wonder how all these categories overlapped.

“I’m interested in the intersectionality of race, sex, and drug use,” he wrote in a real-time chat with presenters. “Were authors able to calculate [adjusted hazard ratio] for these stratified groups?”

Li said that would be feasible but the analysis hasn’t been completed yet. But the question remains: What happened to change timely access to ART and viral suppression between the two periods — 2012 to 2015 and 2016 to 2018? It’s unclear, Li told Medscape Medical News. The CDC changed its guideline to recommend ART within 30 days of first visit in 2012. Since then, some states expanded Medicaid under the Affordable Care Act and cities signed on to the Paris Declaration, which called for individual cities to commit to getting 90% of people diagnosed with HIV, 90% of those on treatment, and 90% of those virally suppressed.

And although Li said the data are critical to improving care for everyone living with HIV, Steffanie Strathdee, PhD, from the University of California, San Diego, told Medscape Medical News that the findings are no surprise. At last year’s CROI, Strathdee galvanized the audience with a plenary on opioid addiction and HIV, where she called for a subspecialty within HIV on addiction medicine, a call echoed by a National Academies of Science, Engineering and Medicine report.

“At a time when North America is experiencing an ongoing and worsening opioid crisis, it is disheartening that people with HIV who have a history of addiction remain 20% to 30% less likely to receive ART,” she said. “We need to stop talking the talk and start walking the walk if we are to end the HIV epidemic within the next few decades.”

Heather Boerner is a science and medical reporter based in Pittsburgh , PA and can be found on Twitter at @HeatherBoerner. Her book, Positively Negative: Love, Sex, and Science’s Surprising Victory Over HIV, came out in 2014.