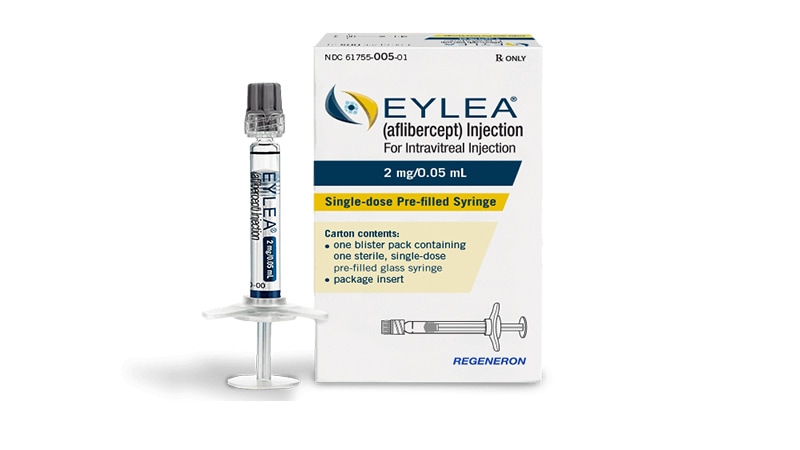 Syringes prefilled with aflibercept by the manufacturer may cause elevated intraocular pressure (IOP) after intravitreal injection, the European Medicines Agency (EMA) is warning.

The agency has received a “higher-than-expected proportion” of elevated IOP, its Pharmacovigilance Risk Assessment Committee (PRAC) noted in a March 12 meeting summary.

“After reviewing the evidence, the PRAC concluded that this may be caused by incorrect handling of the pre-filled Eylea syringe,” the summary said.

The agency did not respond to requests from Medscape for details of the reports or its investigation.

Aflibercept is distributed in Europe by Bayer and in the United States by Regeneron and is used for treatment of age-related macular degeneration (AMD), macular edema, and myopic choroidal neovascularization.

Bayer is aware of a “small number” of reports of elevated IOP in some European Union members states and in Switzerland, Japan, the United Kingdom, and Australia, said Doreen Schroeder, a company spokesperson, in an email.

“Bayer is taking these reports very seriously, and we have implemented appropriate measures so that the risk for these events is mitigated.” The measures include dedicated training on correct handling and preparatory steps for the drug, said.

The EMA’s Summary of Product Characteristics for Eylea lists increased eye pressure as a common side effect, affecting 8% of people in phase 3 trials. The document advises monitoring for this, and cautions against injecting the drug while the IOP is greater than 30 mmHg. It warns that injecting the entire 90 μl contained in the syringe can result in an overdose.

Paul Hahn, MD, PhD, a retina specialist at NJRetina in Teaneck, New Jersey, told Medscape Medical News that elevated IOP can be caused by excess volume in the injection.

“Syringes have a dome shaped plunger, and it is important to align the base of the dome and not the peak with the dosing line,” he said in an email. “Otherwise, excess volume may be administered, particularly with the wide barrel of the Eylea PFS [prefilled syringe], which may cause transient increased IOP beyond what we might typically expect.”

Patients experience IOP increases after each intravitreal injection, and some people experience darkening of vision, eye pain, and nausea, but the eye almost always equilibrates its own pressure without intervention, and these symptoms spontaneously improve within 30 minutes, Hahn said.

Prefilled syringes differ, and Hahn advised reading and following each medication’s package insert instructions, including how to align the plunger appropriately, to dose the correct volume.

The Swiss Agency for Therapeutic Products advises depressing the plunger rod to the bottom of the syringe when injecting the drug “with constant pressure, without applying additional pressure, in order to inject the dose of 50 μl.”

The American Society of Retina Specialists (ASRS), which collects data on adverse events related to retina treatments, has not received any reportsof elevated IOP with aflibercept, said Peter Kaiser, MD, chair of the ASRS Research and Safety in Therapeutics (ReST) Committee.

The reports of elevated IOP came as a surprise to Geoffrey Emerson, MD, PhD. Three years ago, when he was chair of the ASRS ReST Committee, members collected reports of inflammation associated with aflibercept injections that impaired some patients’ vision, as Medscape reported.

Researchers at the time theorized that the inflammation could result from impurities introduced through the process of filling syringes from vials. “Since then, there have been occasional reports but it’s very minimal and it’s within our expected norms,” he said. “We thought one reason it improved is pre-filled syringes.”

Emerson and Kaiser disclosed no relevant financial interests. Hahn reported that he is a speaker/consultant for Genentech and consultant for Alimera.

Laird Harrison writes about science, health and culture. His work has appeared in national magazines, in newspapers, on public radio and on websites. He is at work on a novel about alternate realities in physics. Harrison teaches writing at the Writers Grotto. Visit him at www. lairdharrison.com or follow him on  Twitter: @LairdH.