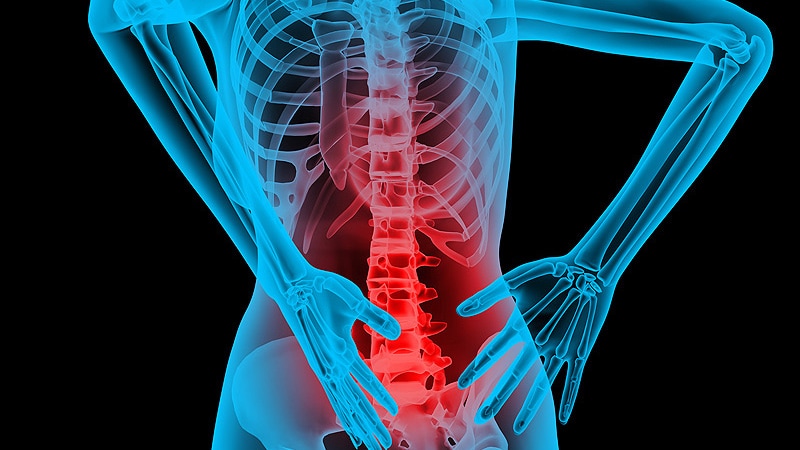 Treatment with etanercept does not appear to achieve significant clinical improvement in patients suspected of having nonradiographic axial spondyloarthritis (nr-axSpA) but without positive MRI signs of sacroiliitis and/or elevated C-reactive protein (CRP) levels, research suggests.

A paper published in Arthritis & Rheumatology presents the outcomes of a randomized, double-blind, placebo-controlled trial of a 16-week course of etanercept at 25 mg twice weekly in 80 tumor necrosis factor inhibitor (TNFi)–naive patients with suspected nr-axSpA. Patients all had chronic inflammatory back pain, at least two spondyloarthritis features – such as HLA-B27 positivity, asymmetrical arthritis, or family history of ankylosing spondylitis – as well as high disease activity and insufficient response to at least two NSAIDs. These patients meet the “clinical arm” of Assessment of SpondyloArthritis international Society (ASAS) criteria for classifying axSpA at an early stage of disease but not “imaging-arm” requirements for the presence of active inflammatory lesions of the sacroiliac joints (SIJ) on MRI and one additional SpA feature.

Whether these imaging criteria and objective evidence of elevated inflammation are necessary to fulfill when considering TNFi treatment for patients with suspected nr-axSpA in daily practice is an important question to address, the authors pointed out, because “in many studies, the presence of a positive MRI-SIJ is one of the prerequisites to start a TNF inhibitor treatment in patients with nr-axSpA.” In addition, starting a TNFi is dependent on failure of at least two NSAIDs and an elevated CRP level when the MRI is negative, which is problematic since in some studies raised CRP levels were found in only 30% of the nr-axSpA patients and 59%-64% of nr-axSpA patients with high disease activity do not have active inflammatory SIJ lesions on MRI. On top of these concerns is the fact that many people who do not have axSpA show false-positive results of bone marrow edema on MRI of the SIJ, such as postpartum women, recreational runners, professional athletes, and army recruits undergoing physical training, they added.

In the current study at the end of the 16-week course of treatment, researchers found no statistically significant difference between the treatment and placebo group in the number of patients who achieved a 20% improvement in ASAS response criteria (16.7% vs. 11.1%; P = .5), nor in those who had at least 40% improvement (8.3% in both groups). This was regardless of sex, age, NSAID or disease-modifying antirheumatic drug use, HLA-B27 status, or other clinical factors.

Similarly, there was no statistically significant difference between the two groups in the number of patients who met response criteria for the Ankylosing Spondylitis Disease Activity Score based on CRP for either clinical improvement or major improvement.

Participants underwent MRI at baseline and at 16 and 24 weeks, which revealed similar numbers of active inflammatory SIJ lesions in each group. The two groups also had similar Spondyloarthritis Research Consortium of Canada scores at baseline and 16 weeks, but a slightly – yet statistically significant – higher score in the etanercept group at 24 weeks.

However, during the first 16 weeks of the study, patients in the etanercept group showed greater improvements in pain and erythrocyte sedimentation rate (ESR), compared with those in the placebo group.

After the 16-week treatment course, participants were followed for another 8 weeks. During this time, participants in the etanercept group showed a worsening in their mean Bath Ankylosing Spondylitis Metrology Index score, CRP level, and ESR, compared with the placebo group.

Study Results in the Context of Previous Findings

Commenting on their findings, first author Tamara Rusman, of the Amsterdam University Medical Center, and coauthors wrote that the results suggested early treatment with etanercept in patients without a positive MRI and raised CRP levels was not effective.

However, they acknowledged that two previous placebo-controlled studies had specifically included patients with nr-axSpA and found a significantly better treatment response to TNF inhibitors than to placebo. One of these studies included a significant number of patients with MRI-detected active inflammatory SIJ lesions at baseline, which is a known predictor of treatment response.

“The relatively low number of patients with either a positive MRI-SIJ (23%) and/or elevated CRP level (13%) at baseline in our study could be an explanation for the absence of a treatment effect in favor of etanercept,” they wrote.

They also raised the possibility that their choice of study population didn’t truly capture patients with nr-axSpA, and that it was not powered to compare patients with or without a positive MRI or raised CRP level at baseline.

“It would be interesting to know whether our study results will be replicated by others in comparable study populations with equal numbers of patients with and without a positive MRI-SIJ and raised CRP in the future,” they wrote.

The study was supported by an unrestricted financial grant from Pfizer and ReumaNederland. No conflicts of interest were declared.