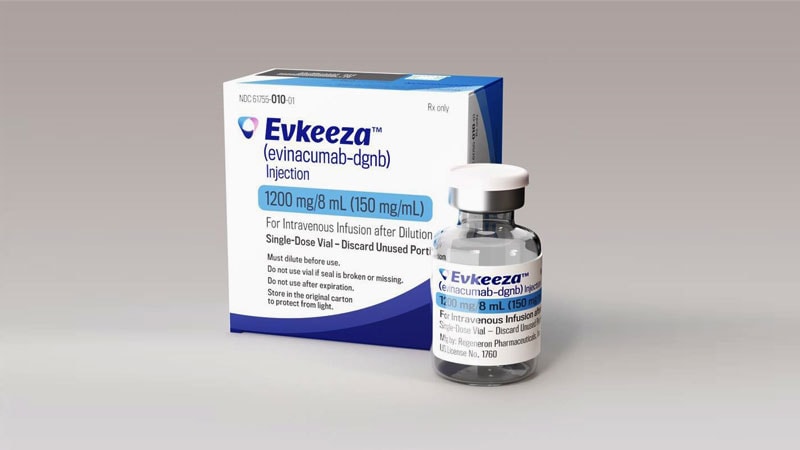 The US Food and Drug Administration has approved the fully human monoclonal antibody evinacumab-dgnb (Evkeeza, Regeneron Pharmaceuticals) for use on top of other cholesterol-modifying meds in patients aged 12 and older with homozygous familial hypercholesterolemia (HoFH), the agency and Regeneron have announced.

Evinacumab had received orphan drug designation and underwent priority regulatory review based primarily on the phase 3 ELIPSE trial, presented at a meeting in March 2020 and published last summer in the New England Journal of Medicine.

In the trial with 65 patients with HoFH on guideline-based lipid-modifying therapy, those who also received evinacumab 15 mg/kg intravenously every 4 weeks showed a nearly 50% drop in low-density-lipoprotein (LDL) cholesterol levels after 24 weeks, compared with patients given a placebo. Only 2% of patients in both groups discontinued therapy because of adverse reactions.

The drug blocks angiopoietin-like 3 (ANGPTL3), itself an inhibitor of lipoprotein lipase and endothelial lipase. It therefore lowers LDL cholesterol levels by mechanisms that don’t directly involve the LDL receptor.

Regeneron estimates that about 1300 people in the United States have the ultra-rare homozygous genetic disorder, which can lead to LDL cholesterol levels of a 1000 mg/dL or higher, advanced premature atherosclerosis, and extreme risk for cardiovascular events.

The drug’s average wholesale acquisition cost per patient in the United States is expected to be about $450,000 per year, the company says, adding that it has a financial support program to help qualified patients with out-of-pocket costs.

The drug is currently under regulatory review for the same indication in Europe, the company said.

Should you consume caffeine while pregnant?
Soothe Sore Muscles and Improve Your Flexibility With This Quick and Simple Stretch Workout
One month in, how Biden has changed disaster management and the US COVID-19 response
12 things you didn’t know could be symptoms of depression
Study examines the adoption of telemedicine program in a senior living community