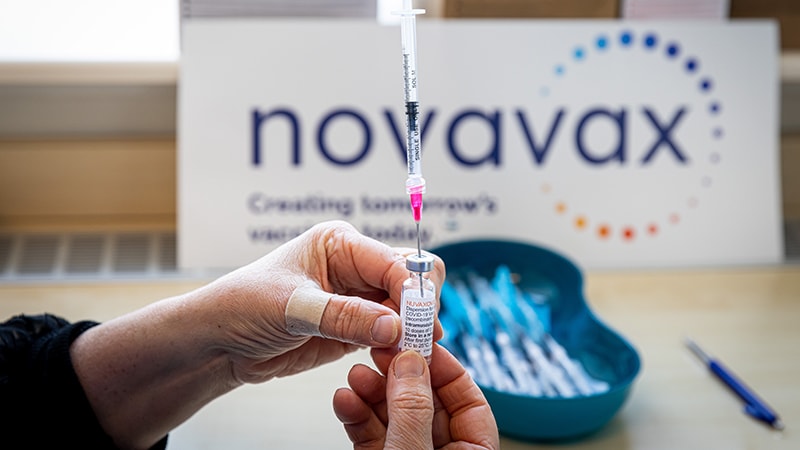 A federal advisory panel strongly supported a bid for Novavax to win US emergency authorization for its COVID-19 vaccine, which is based on a more traditional, protein-based approach than the cutting-edge technology used in mRNA-based shots.

​​The Vaccines and Related Biological Products Advisory Committee of the US Food and Drug Administration (FDA) voted near unanimously Tuesday in favor of Novavax’s two-dose COVID-19 vaccine for those 18 or older — despite some concerns over rare events of myocarditis and pericarditis.

The tally was 21 “yes” votes, without any “no” votes, but one abstention from a panelist who then offered a largely positive take on this vaccine.

Panelist Bruce Gellin, MD, MPH, explained at the end of the meeting that he would have cast a conditional vote in favor of the Novavax vaccine, called NVX-CoV2373, had that been an option. Gellin, who is the chief of global public health strategy for the Rockefeller Foundation and a vaccine expert, said he didn’t want his abstention to be considered as signaling opposition to the Novavax shot.

Instead, he said, he expects FDA officials will gather more data and evidence about the Novavax vaccine, especially in relation to certain manufacturing issues, before making its decision on the company’s application.

Earlier in the day, a top FDA vaccine reviewer, Doran Fink, MD, PhD, noted that there were important manufacturing differences between the Novavax vaccine supply used in different projects, complicating efforts to assess the company’s application for emergency use authorization (EUA).

But Fink noted that the FDA staff already had made a convincing case in its briefing document, with enough evidence for an initial conditional clearance to be found in available data.

The FDA is not bound to follow the suggestions of its advisory committees but it often does.

At the beginning of the meeting, Peter Marks, MD, PhD, director of the FDA’s Center for Biologics Evaluation and Research, said he was seizing the “bully pulpit” in addressing the need to persuade more people in the United States to take shots against COVID.

About 67% of people in the United States age 18 and older are fully vaccinated, but only about 50% of those in this group have had a first booster, according to the Centers for Disease Control and Prevention (CDC).

The two-dose mRNA vaccines from Pfizer and Moderna have been the subject of intense misinformation campaigns on social media, despite efforts by the FDA and other public health officials to convey the message about their strong benefit-risk profile. The FDA in May limited the authorized use of Johnson & Johnson’s single-dose COVID shot, which is based on a different technology, due to concerns about rare and potentially life-threatening blood clots.

Novavax has been described as a more traditional vaccine — a protein subunit shot similar to one people have long received for protection against influenza, pertussis (whooping cough), diphtheria, and tetanus.

“Having a protein-based alternative may be more comfortable for some in terms of their acceptance of vaccines,” Marks said. “We do have a problem with vaccine uptake that is very serious in the United States. And anything we can do to get people more comfortable to be able to accept these potentially life-saving medical products is something that we feel we are compelled to do.”

Marks offered these remarks in answer to an FDA panelist’s question about the need to consider an EUA for yet another vaccine.

EUAs are special clearances the FDA can grant in connection with public health emergencies like the pandemic. The FDA used EUAs for the initial December 2020 clearances of the Pfizer-BioNTech and Moderna vaccines. It has since granted normal approvals for both of these mRNA-based vaccines, based on larger bodies of evidence gathered and submitted by their developers.

During the meeting, the FDA panelists in general appeared comfortable with the idea of granting another EUA for a vaccine. There was agreement that the shot appeared to work in key tests, although these were done before the rise of the Omicron variant.

Panelists expressed disappointment with the lack of information about how the shot would work now.

“We’re looking at the efficacy against strains that don’t exist any longer,” said panelist Eric J. Rubin, MD, PhD, a Harvard professor who is also editor of the New England Journal of Medicine.

Still, Rubin added that he agreed with the argument the FDA’s Marks had made earlier for an EUA for the Novavax vaccine.

Other FDA panelists were skeptical of this argument. Jay Portnoy, MD, who was listed on the FDA roster as the panel’s consumer representative, said he has close friends who are vaccine skeptics.

“Their hesitancy is more ideological than technological,” said Portnoy, Children’s Mercy Hospital, Kansas City, Missouri. “So I really doubt that this vaccine is going to crack that nut, but perhaps some individuals would get this when they wouldn’t get the other ones.”

The Novavax vaccine is already authorized in other countries, including Canada. Novavax in February announced that it had begun shipping its first doses of the vaccine to European Union member states. The vaccine can be moved through existing vaccine supply and cold chain channels instead of requiring complex new delivery procedures.

“Who knows even with supply chain challenges down the road, it will be nice to have options going forward,” Nelson said.

As with other COVID vaccines, clinicians and researchers are still working to understand the potential risk for inflammation of heart muscle and nearby tissue with COVID vaccination. Most patients with myocarditis or pericarditis who sought medical care for these conditions responded well to medicine and rest and felt better quickly, the CDC says on its website. They usually return to their normal daily activities after their symptoms improve.

At Tuesday’s meeting, Nelson said there may be cases of myocarditis that go undetected.

“Our signals are those who get admitted to the emergency room and the hospital,” he said. “I’m quite convinced that there are others who are experiencing cardiac events of lesser severity that are worthy of being studied, both from mechanistic and outcomes standpoints. So we have a lot of work to do.”

In looking at results for an initial pool of 40,000 people who received the Novavax vaccine, there were five reported cases of myocarditis or pericarditis developing within 20 days of people getting the shot, the FDA staff said in its presentation on safety.

In a briefing document released ahead of the advisory committee meeting, the FDA staff flagged this number of cases in a relatively small database as a concern, noting it “could be higher than reported during post-authorization use of mRNA COVID-19 vaccines (for which no cases were identified in pre-authorization evaluation).”

Novavax officials took a somewhat unusual step of responding in public. The Gaithersburg, Maryland-based company on June 3 issued a statement saying researchers had come to “expect to see natural background events of myocarditis in any sufficiently large database, and that young males are at higher risk.”

The data from the company’s placebo-controlled studies show that, overall, in its clinical development program, the rate of myocarditis was balanced between the vaccine and placebo arms (0.007% and 0.005%), Novavax said.

At Tuesday’s meeting, FDA panelists including Nelson, and Paul A. Offit, MD, Children’s Hospital of Philadelphia, Pennsylvania, urged continued study to try to determine whether and how the vaccines could trigger myocarditis. Investments made now in pursuing these questions related to COVID shots may pay off later, Offit said.

“We can use that knowledge to make safer vaccines for a disease that is going to be with us for decades, if not longer,” he said.

Kerry Dooley Young is a freelance journalist based in Miami Beach, Florida. She is the core topic leader on patient safety issues for the Association of Health Care Journalists.Young earlier covered health policy and the federal budget for Congressional Quarterly/CQ Roll Call and the pharmaceutical industry and the Food and Drug Administration for Bloomberg. Follow her on Twitter at @kdooleyyoung.

This Old Navy Activewear Set Is So Comfy, I Wore It on a 20-Hour Road Trip
AI-based smartphone apps to spot skin cancer endanger the public, experts warn
HIV Care May Have Slipped During the Pandemic
Phoebe Bridgers on Why She Decided to Share Her Abortion Story
Study: Nearly 80% of people in the U.S. have low to moderate cardiovascular health