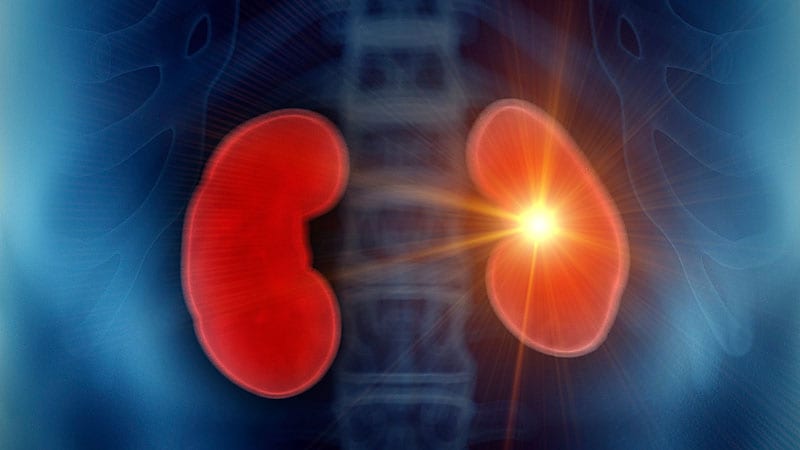 New data on using the nonsteroidal mineralocorticoid receptor antagonist (MRA) finerenone to treat patients with type 2 diabetes and chronic kidney disease did more than further confirm this new drug’s efficacy in these patients for slowing progression to end-stage renal disease and reducing hospitalizations for heart failure.

It also strengthened the case for clinicians to be much more proactive in collecting urine specimens from patients with type 2 diabetes (T2D) to find those with albuminuria whose kidney function has not yet dropped below 60 mL/min per 1.73 m2, a population that the data show finerenone can help.

The FIDELITY analysis combined data from two related pivotal trials of finerenone (Kerendia) in a total of more than 13,000 patients with T2D and chronic kidney disease (CKD). Each of these two trials, FIDELIO-DKD and FIGARO-DKD, identified patients with CKD by either of two methods, or a total of four different criteria.

The results showed that during a median follow-up of 36 months, patients with a normal eGFR and albuminuria had their combined incidence of cardiovascular disease events (cardiovascular death, MI, stroke, or hospitalization for heart failure) reduced by roughly the same amount as seen in patients with lower levels of eGFR and renal function, a finding that reimagines how clinicians need to routinely screen patients with T2D for CKD, Gerasimos Filippatos, MD, reported at the virtual annual congress of the European Society of Cardiology.

“Measuring UACR in patients with type 2 diabetes is important to identify patients who will benefit from finerenone treatment independent of their eGFR,” said Dr. Filippatos, professor of medicine at the University of Athens and director of the heart failure unit at Attikon University Hospital in Athens.

The combined FIDELITY analysis showed a significant overall cut in the combined cardiovascular disease endpoint of 14% relative to placebo, which reflected a 1.7% absolute reduction in events between the two arms during 3 years of treatment. The primary driver of this benefit was the significant drop in hospitalizations for heart failure on finerenone compared with placebo, which fell by a relative 22% and by an absolute 1.1%, Dr. Filippatos reported.

“This is really practice changing information for cardiologists,” said Rajiv L. Agarwal, MD, a copresenter of the FIDELITY analysis and a lead investigator of the two finerenone trials.

When cardiologists and possibly other specialists see patients with T2D, they traditionally have focused on measuring left ventricular ejection fraction and checking for other indications of heart failure. The new results from FIDELIO-DKD and FIGARO-DKD showed that finerenone treatment can prevent heart failure onset or worsening in patients with T2D with finerenone, which clinicians can accomplish by “simply measuring UACR,” as well as eGFR, and then treating patients with abnormal levels of either, explained Dr. Agarwal, a nephrologist and professor of medicine at Indiana University in Indianapolis.

“Diabetologists know that when they see patients with diabetes they need to collect a urine sample to check for albuminuria. But when some other clinicians see a patient with type 2 diabetes and a normal eGFR, they often think that the patient is okay and don’t get a urine specimen,” noted Bertram Pitt, MD, another collaborator of the finerenone trials and a heart failure specialist affiliated with the University of Michigan in Ann Arbor.

“We need to pay more attention to UACR and albuminuria; traditionally clinicians have mostly looked at eGFR,” agreed Dipti Itchhaporia, MD, a cardiologist at the Carlton Heart and Vascular Institute of Hoag Hospital in Newport Beach, Calif. UACR “is a marker that should be shared” between endocrinologists, nephrologists, and cardiologists as they together care for patients with T2D, suggested Dr. Itchhaporia, president of the American College of Cardiology.

The FIDELITY analysis combined data from the FIDELIO-DKD trial, reported in 2020, and from the FIGARO-DKD trial that was first reported during the current congress as well as in a simultaneous report published online.

In addition to showing a consistent, significant reduction in both combined cardiovascular disease events and in the specific endpoint of hospitalization for heart failure, the two trials also showed a consistent benefit for slowing renal disease progression, including significantly fewer patients developing end-stage kidney disease. In the combined FIDELITY analysis, treatment with finerenone cut the incidence of end-stage kidney disease by a significant 20% compared with placebo, and by an absolute reduction of 0.6%.

“Finerenone is much better tolerated” than the steroidal MRAs in causing clinically significant hyperkalemia, noted Dr. Pitt. “There are a lot of misconceptions” about the potassium-raising potential of MRAs, and “people get frightened” by the potential. Spreading the message of finerenone’s relative safety “will take a lot of education,” he acknowledged. Routine monitoring of potassium levels is a key step to minimizing the risk for hyperkalemia when using finerenone, he added.

Another intriguing observation from FIDELITY derived from the fact that roughly 7% of enrolled patients were also on treatment with a sodium-glucose cotransporter 2 (SGLT2) inhibitor at entry, and about 7% were on treatment with a glucagon-like peptide-1 (GLP-1) receptor agonist, and in both subgroups the incidence of the composite cardiovascular disease endpoint appeared to suggest additive effects of agents from either of these classes when combined with finerenone. Although the numbers of patients on combined treatment were too low to show a definitive result, “our expectation is that we will see an additive effect,” said Dr. Pitt. Ideally, patients with T2D and CKD “should be on both” an SGLT2 inhibitor and finerenone, he predicted.

SGLT2 inhibitors have now been embraced as a key treatment for patients with T2D or with heart failure with reduced ejection fraction, and the preliminary data suggest that combining these agents with finerenone can provide additional benefit, agreed Dr. Itchhaporia. Aside from the need for more evidence to prove this, there are also practical considerations of “How do we pay for all these fantastic therapies?” She expressed optimism that cost-benefit analyses will eventually show that the additive benefits justify the added cost.

Based largely on results from FIDELIO-DKD, finerenone received marketing approval from the Food and Drug Administration in July 2021 for the indication of treating patients with T2D and chronic kidney disease.