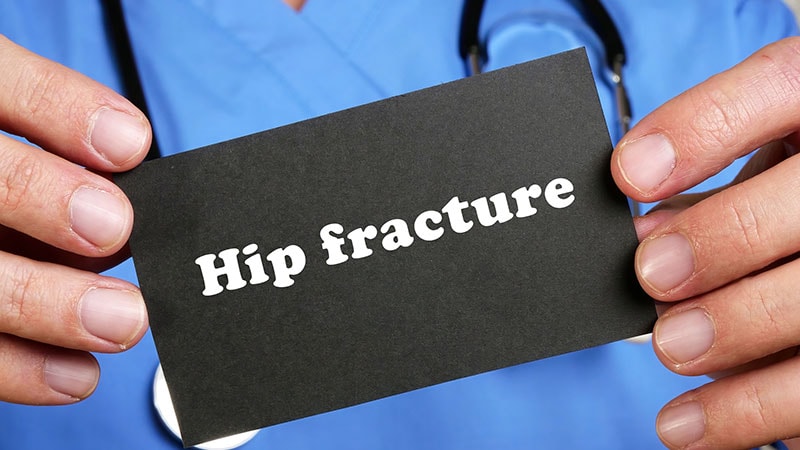 The annual incidence of hip fractures declined in most countries from 2005 to 2018, but this rate is projected to roughly double by 2050, according to a new study of 19 countries/regions.

The study by Chor-Wing Sing, PhD, and colleagues was presented on September 9 at the American Society of Bone and Mineral Research (ASBMR) 2022 Annual Meeting. The predicted increase in hip fractures is being driven by the aging population, with the population of those age 85 and older projected to increase 4.5-fold from 2010 to 2050, they note.

In addition, rates of use of osteoporosis drugs 1 year after a hip fracture were less than 50%, with less treatment in men. Men were also more likely than women to die within 1 year of a hip fracture.

The researchers conclude that “larger and more collaborative efforts among healthcare providers, policymakers, and patients are needed to prevent hip fractures and improve the treatment gap and post-fracture care, especially in men and the oldest old.”

“Even though there is a decreasing trend of hip fracture incidence in some countries, such a percentage decrease is insufficient to offset the percentage increase in the aging population,” senior co-author Ching-Lung Cheung, PhD, associate professor in the Department of Pharmacology and Pharmacy at the University of Hong Kong, explained to Medscape Medical News.

The takeaways from the study are that “a greater effort on fracture prevention should be made to avoid the continuous increase in the number of hip fractures,” he said.

In addition, “although initiation of anti-osteoporosis medication after hip fracture is recommended in international guidelines, the 1-year treatment rate [was] well below 50% in most of the countries and regions studied. This indicates the treatment rate is far from optimal.”

“Our study also showed that the use of anti-osteoporosis medications following a hip fracture is lower in men than in women by 30% to 67%,” he said. “Thus, more attention should be paid to preventing and treating hip fractures in men.”

“The greater increase in the projected number of hip fractures in men than in women “could be [because] osteoporosis is commonly perceived as a ‘woman’s disease,'” he speculated.

Invited to comment, Juliet Compston, MD, who selected the study as one of the top clinical science highlight abstracts at the ASBMR meeting, agrees that “there is substantial room for improvement” in osteoporosis treatment rates following a hip fracture “in all the regions covered by the study.”

“In addition,” she continues, “the wide variations in treatment rates can provide important lessons about the most effective models of care for people who sustain a hip fracture, for example, fracture liaison services.”

Men Suffer as Osteoporosis Perceived to Be a “Woman‘s Disease”

The even lower treatment rate in men than women is ”concerning and likely reflect the mistaken perception that osteoporosis is predominantly a disease affecting women,” notes Compston, emeritus professor of bone medicine, University of Cambridge, UK.

Also invited to comment, Peter R. Ebeling, MD, outgoing president of the ASBMR, said that the projected doubling of hip fractures “is likely mainly due to aging of the population, with increasing lifespan for males in particular. However, increasing urbanization and decreasing weight-bearing exercise as a result are likely to also contribute in developing countries.”

“Unfortunately, despite the advances in treatments for osteoporosis over the last 25 years, osteoporosis treatment rates remain low and osteoporosis remains undiagnosed in postmenopausal women and older men,” added Ebeling, from Monash University, Melbourne, Victoria, Australia, who was not involved with the research.

“More targeted screening for osteoporosis would help,” he said, “as would treating patients for it following other minimal trauma fractures (vertebral, distal radius, and humerus, etc) since if left untreated about 50% of these patients will have hip fractures later in life.”

The public health implications of this study are “substantial” according to Compston. “People who have sustained a hip fracture are at high risk of subsequent fractures if untreated. There is a range of safe, cost-effective pharmacological therapies to reduce fracture rate, and wider use of these would have a major impact on the current and future burden imposed by hip fractures in the elderly population.”

Similarly, Ebeling noted that “prevention is important to save a huge health burden for patients and costs for society.”

“Patients with minimal trauma fractures (particularly hip or spinal fractures) should be investigated and treated for osteoporosis with care pathways established in the hospitals, reaching out to the community [fracture liaison services],” he said.

Projections for Number of Hip Fractures to 2050

Previous international reviews of hip fractures have been based on heterogeneous data from more than 10 to 30 years ago, the researchers note.

They performed a retrospective cohort study using a common protocol across 19 countries/region, as described in an article about the protocol published in BMJ Open.

In a second step, they estimated the number of hip fractures that would occur from 2030 to 2050, using World Bank population growth projections.

The population in Japan was under age 75. US data are from two databases: Medicare (age ≥ 65) and Optum.

“One potential reason that some countries have seen relatively large declines in hip fractures is better osteoporosis management and post-fracture care,” said Chor‐Wing Sing in a press release issued by ASBMR. “Better fall-prevention programs and clearer guidelines for clinical care have likely made a difference.”

The UK had the highest rate of osteoporosis treatment at 1-year after a hip fracture (50.3%). Rates in the other countries/regions ranged from 11.5% to 37%.

From 2005 to 2018, rates of osteoporosis treatment at 1 year after a hip fracture declined in six countries, increased in four countries, and were stable in five countries.

“Among the studied countries and regions, the US ranks fifth with the highest hip fracture incidence,” Cheung replied when specifically asked about this. “The risk of hip fracture is determined by multiple factors, eg, lifestyle, diet, genetics, as well as management of osteoporosis,” he noted.

“Denmark is the only country showing no projected increase, and it is because Denmark had a continuous and remarkable decrease in the incidence of hip fractures,” he added, which “can offset the number of hip fractures contributed by the population aging.”

The study was funded by Amgen. Sing and Leung have reported no relevant financial relationships. One of the study authors is employed by Amgen.

3 takeaways from our daily meeting: Still oversold, picking at chip stocks, Club names in the news
Coffee lowers risk of heart problems and early death, study says
8 low-cost things to do with friends
25 of the Best Gifts For Peloton-Lovers
US States With ‘High’ Adult Obesity Rate Doubles; Is Yours One Of Them?