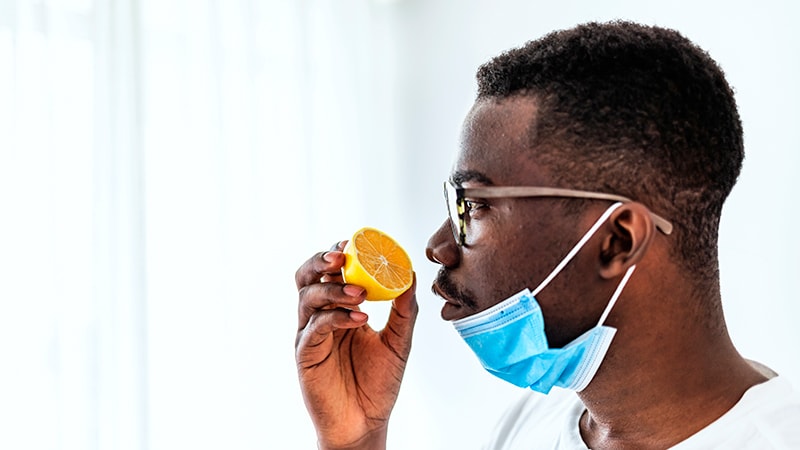 PHILADELPHIA — In patients with persistent hyposmia after COVID-19 infection, the specific pattern of impaired olfaction can distinguish these patients from normal controls and from individuals with mild cognitive impairment, a study has shown.

“We know that overall, 1 in 8 patients, at least, who have had COVID, are going to have persistent olfactory dysfunction,” Jennifer Villwock, MD, of the University of Kansas Medical Center in Kansas City, told attendees here at the American Academy of Otolaryngology-Head and Neck Surgery 2022 annual meeting. She noted that there is some evidence that “the way in which it’s manifesting is changing with subsequent waves” of infection.

Olfactory dysfunction (OD) can be a valuable, noninvasive biomarker of disease. Olfaction and cognitive impairment have been strongly linked for several decades. “So what does this mean for future cognitive decline for the millions of people, hundreds of millions, that will continue to struggle about olfactory dysfunction?” she asked, wondering if persistent post-COVID-19 OD could interfere with its later use as a marker of cognitive decline.

Thus, Villwock and colleagues set out to identify etiology-specific olfactory phenotypes that could be used to distinguish between OD caused by COVID-19 from that characteristic of mild cognitive impairment (MCI). Their study prospectively enrolled patients with confirmed hyposmia associated with COVID-19 (n = 73), patients with MCI (n = 58), and normal controls (n = 86).

Demographic characteristics of the three subject groups were largely similar except that the MCI cohort was older (69.3 ± 8.8 years) than the control (49.6 ± 21.7 years) or COVID cohorts (45.0 ± 15.1 years). The gender distributions differed among groups as well, but Villwock said subsequent analyses controlled for age and gender.

Logistic regression models for each etiology of poor olfaction (COVID-19 or MCI) vs normal controls were built using age, gender, and the different scents in AROMA to arrive at odds ratios for each etiology based on inability to detect specific scents.

The inability to smell licorice, cinnamon, or lemon at the three lowest concentrations was associated with COVID-19 hyposmia. The patients with MCI did not have a deficit in detecting these scents, but they did have an inability to smell coffee, eucalyptus, and rose.

Table. Association of etiology with inability to smell specific scents

She predicted that the good discriminative performance based on phenotype “may allow for continued utilization of olfactory screening for MCI even among those with previous COVID-19 infection.”

One limitation of the study was that the long-term natural history of COVID-19-associated hyposmia is unknown. Another limitation was that it was a single-institution study, so a risk of bias is possible because of a homogeneous patient population and reporting practices. Finally, olfactory deficits after COVID-19 can range from mild to complete anosmia, so future, larger studies will need to control for the large variance.

Session moderator Elizabeth Willingham, MD, of Emory University School of Medicine in Atlanta, who was not involved with the study, commented to Medscape Medical News that she found the study “fascinating…to be able to differentiate between the etiology of loss of smell between the cognitive defects and the COVID…I thought it was fascinating that you can differentiate it down to the scent.”

She said the study shows that scent is a “very important early marker” for significant disease like cognitive impairment and COVID…so [I’m] glad to see it’s getting its proper respect.

There is a patent pending for the AROMA olfactory testing methodology developed at the University of Kansas. Villwock had no other disclosures, and Willingham reported no relevant financial relationships.

8 low-cost things to do with friends
CDC Warns of Severe Monkeypox in People With HIV, the Immunocompromised
What is rainbow fentanyl? Colorful pills drive new warnings about deadliest drug in the US
Prenatal exposure to high-dose folic acid linked to cancer risk in children of mothers with epilepsy
Parental support improves the brain development of prematurely born infants