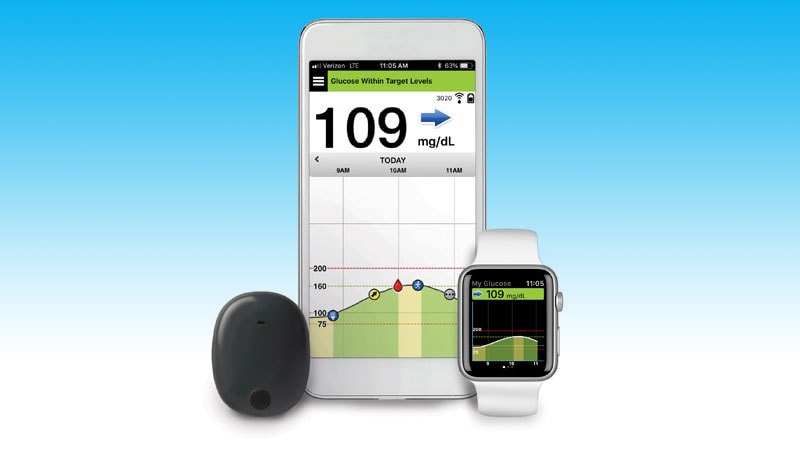 A next-generation implanted continuous glucose monitor (Eversense, Senseonics/Ascensia) is accurate and safe for up to 6 months of use, new data suggest.

The first-generation 90-day Eversense was approved by the US Food and Drug Administration in June 2018 and is currently the only long-term implanted continuous glucose monitor (CGM) available in the United States and Europe.

An older 180-day version (Eversense XL) has been available in Europe since 2017. The new second-generation 180-day system is currently under regulatory review in both the United States and Europe.

The Eversense consists of a fluorescence-based sensor, a transmitter, and a smartphone app that displays glucose values, trends, and alerts. The sensor is inserted subcutaneously into the upper arm by a certified healthcare professional in a brief office procedure. The transmitter is placed on the skin on top of the sensor.

The system includes an on-body vibratory alert as well as alerts on the app for high and low blood glucose values. Unlike some other CGMs, there is no interference with use of either acetaminophen (paracetamol) or vitamin C. Eversense readings may be used for treatment decisions, but users still must perform fingerstick glucose checks for calibration (although the new system reduces the number).

“A Welcome Addition to Real-Time CGM”

“The next-generation Eversense CGM system is safe and accurate for up to 180 days, particularly in hypoglycemia ranges, and allows for a single calibration per day on most days of system wear. With many unique features, this system should be considered a welcomed addition to options available for real-time CGM,” said Garg, of the Barbara Davis Center for Diabetes, University of Colorado, Aurora.

Asked to comment, session moderator Francisco Pasquel, MD, of the division of endocrinology at Emory University, Atlanta, Georgia, told Medscape Medical News: “The fact that it works for a long time, that it’s accurate, and that it can integrate with our smartphones into our ecosystem of technology I think is great news.”

However, Pasquel cautioned that although the infection rate in the study was low, it remains a potential concern with an implanted device. In addition, “some people may not feel comfortable with having something implanted.” But on the other hand, “it may [ease] the burden for some.”

The study involved 181 participants with diabetes at eight clinical research sites. Two thirds had type 1 diabetes, and the rest had type 2 diabetes.

Ninety-six patients wore two sensors, one on each arm. In 53 patients, the second sensor was identical to the primary sensor, and in the other 43 patients, the sensor was modified with sacrificial boronic acid (SBA) to reduce oxidation of the glucose-binding indicator chemistry.

The system prompted users to calibrate with fingersticks twice a day for the first 21 days, followed by once daily.

They were given hyper- and hypoglycemic challenges, and the CGM values were compared with a reference measure (YSI 2300 glucose analyzer).

“Compared with the primary sensor, the SBA sensor performed better. More readings were within 20%…Clearly this biochemical change in the SBA sensor will be the future way to go,” Garg commented.

The SBA sensor also was better at detecting hypoglycemia, identifying 90% of episodes of blood glucose < 60 mg/dL versus 87% for the primary sensor. Event detection at high glucose levels was similar, with both detecting 99% of episodes > 180 mg/dL.

Senseonics has submitted data for both sensor types to US and European regulatory agencies, a company spokeswoman told Medscape Medical News.

“So there was no deterioration in glycemic control and, if anything, a slight improvement,” Garg noted.

In June 2018, Senseonics announced a partnership with Beta Bionics to codevelop a “bionic pancreas” system. That project is ongoing, the spokeswoman told Medscape Medical News.

Garg has reported being an advisor for, consultant for, and/or has receive research grants from Medtronic, Novo Nordisk, Zealand, LifeScan Diabetes Institute, Eli Lilly, Lexicon, Dario, Animas, Dexcom, Sanofi, Senseonics, T1D Exchange, National Institute of Diabetes and Digestive and Kidney Diseases, and JDRF. All research grants and honoraria go through his institution. Pasquel has reported receiving research support from Dexcom, Merck, and Insulet, and consulting fees from Boehringer Ingelheim.

Miriam E. Tucker is a freelance journalist based in the Washington, DC, area. She is a regular contributor to Medscape, with other work appearing in The Washington Post, NPR’s Shots blog, and Diabetes Forecast magazine. She is on Twitter: @MiriamETucker.

Sharp rise in screen time during the pandemic may be linked to increase in childhood short-sightedness
Royal Caribbean shares tumble as 6 Covid cases discovered on board a ship, cruise line expands U.S. testing policy
Naloxone Rebound Akathisia: It Could Turn on You
Get Ready to Kickbox, Sweat, and Work Your Core With These 3 Instagram Live Workouts
England: Smoking responsible for twice as many cancers in most deprived groups