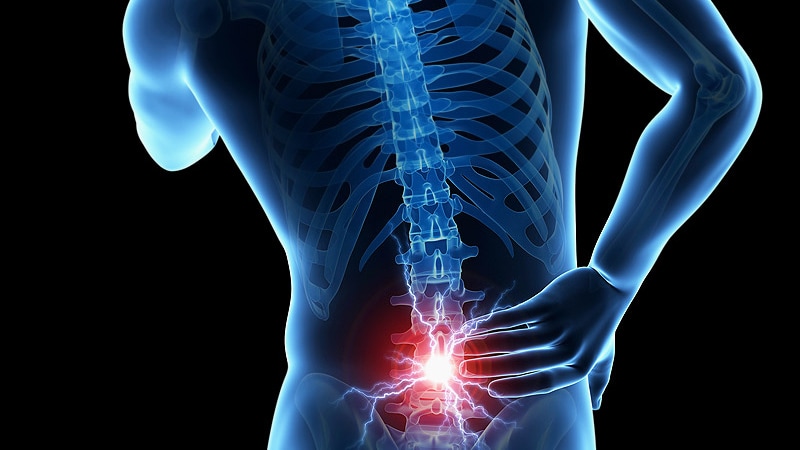 A safe and minimally invasive implanted stimulation device is getting mostly positive reviews from neurosurgeons, with some experts saying it represents a “paradigm shift” in the treatment of mechanical low back pain.

Results from a multicountry study show that the ReActiv8 device (Mainstay Medical Limited) is efficacious, improving function and reducing pain for up to 2 years for patients with back pain caused by loss of function in the multifidus muscle.

“This isn’t covering up pain. This is restoring function of the strongest stabilizing muscle of the lumbar spine and in that way returning neuromuscular control and stability such that the patient’s pain improves,” Gilligan said.

The findings were discussed at the American Association of Neurological Surgeons (AANS) 2021 Annual Meeting, which was held online.

Patients with chronic neuropathic low back pain may be candidates for surgical procedures, such as fusion or decompression. However, these are not options for the larger population of individuals with nociceptive mechanical pain, many of whom have dysfunction of the multifidus muscle.

The current study included 204 relatively young patients (mean age, 47 years) who were enrolled at 26 sites around the world, including 16 sites in the United States. Baseline score on a low back pain visual analogue scale (VAS) was 7.3 cm, and the baseline Oswestry Disability Index (ODI) score was 39 points.

Participants had had low back pain for about 14 years and had experienced pain on 97% of days in the prior year. Virtually 100% had previously undergone physical therapy without success.

For all patients, pain medication had failed: 37% were taking opioids at the start of the study, and interventional pain therapies, such as steroid injections, had failed for 52% of the patients.

In the stimulation procedure, surgeons placed leads next to medial branch nerves, which provide motor enervation of the multifidus muscle, on each side of the back. They then connected the leads to a pulse generator implanted in the upper buttock.

In this treatment, patients turn on the stimulator twice a day for 30 minuntes each time. When it is on, it alternates between 10 seconds of contraction of the multifidus and 20 seconds of rest.

“A lot of patients describe it as feeling like a pleasant massage,” said Gilligan. “They can feel the muscle contracting, but it’s not an unpleasant feeling.”

The researchers followed the study participants in a blinded fashion for 120 days.

Results showed that the mean group difference in VAS improvement was significant for the treatment in comparison with the sham procedure (23.3 vs 22.4, P = .03). The active intervention was also significantly better with regard to improvement in scores on the ODI and the EQ-5D Health-related Quality of Life Questionnaire and the percentage of pain relief.

The secondary outcome of resolution of low back pain did not achieve significance.

“Frankly, after 14 years of pain, we would not expect them to have resolution of their back pain” at 120 days, Gilligan said.

Positive findings from patient satisfaction questionnaires and physician Clinical Global Impression of Change scores were significant for the therapeutic stimulation.

After 120 days, participants in the sham treatment group crossed over to active treatment. Patients are being followed to 1 year, then 2 years.

Discussing 1-year results for a cohort of 176 participants, Gilligan said the mean VAS score was 3 cm, which was a decrease of 59% from baseline. “That’s severe pain going to mild pain,” he said.

The mean ODI score was 19, and “anything less than 20 is mild disability,” Gilligan reported.

Almost half (48%) of those taking opioids at baseline voluntarily stopped using them, and 28% reduced their intake.

On the basis of these results, the US Food and Drug Administration (FDA) approved the device last year, as reported by Medscape Medical News at the time.

For 156 patients, their condition continued to improve at 2 years, said Gilligan. “The longer you treat, the greater the benefits,” he said.

Some patients found they needed less and less stimulation, to the point where the implant was removed. Others continue to regularly use the stimulator. One patient in Australia has had it for 7 years, Gilligan reported.

During the sponsored session featuring the research, Robert M. Levy, MD, PhD, president of the International Neurostimulation Society, said the stimulator should “have a great impact” because neurosurgeons have had little to recommend to back pain patients who are not good candidates for a spinal operation.

“For the very first time, there is a minimally invasive, safe, and yet highly effective procedure to offer these patients,” Levy said.

Other session speakers agreed that the device represents “a paradigm shift” in treating such patients.

However, another expert wasn’t as enthusiastic about the device.

Medscape Medical News asked Michael Hooten, MD, professor of anesthesiology, Division of Pain Medicine, Mayo Clinic, Rochester, Minnesota, to comment on the research the FDA considered for its approval. Results of that research were published earlier this year in Pain.

The study was a “very well-designed,” randomized, sham-controlled trial, said Hooten, who did not attend the AANS virtual meeting.

However, he pointed out that the study’s primary endpoint of between-group difference in proportion of participants who achieved 30% or greater pain relief was not statistically significant at 120 days (57.1% vs 46.6%, P = .138).

“The primary endpoint was inconclusive in terms of treatment superiority,” the investigators write in the article.

However, Hooten said this finding was “unambiguous” and that it “wasn’t even close” with a P value of .138.

“They did not achieve the endpoint that the study was designed to meet,” he noted. On this basis, Hooten said he was somewhat surprised Pain published the study.

The research was funded by Mainstay Medical. Gilligan reported that Mainstay Medical pays part of his salary directly to his department. The session panel members and Hooten reported no relevant financial relationships.