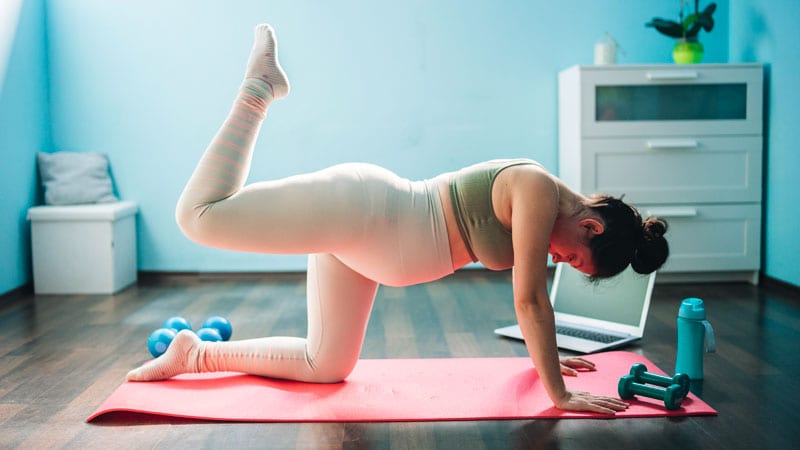 Lung function in early infancy may be influenced by the mother’s level of physical activity during pregnancy, results of a study from Sweden suggest.

Low-lung function at 3 months of age, as measured by the ratio of time to peak tidal expiratory flow to expiratory time (tPTEF / tE), was more frequent among children whose mothers were physically inactive during the first half of pregnancy compared with those who exercised either moderately or strenuously, reported Hrefna Katrin Gudmundsdottir, MD, a pediatrician and PhD candidate at the University of Oslo, Norway. The results were based on a prospective observational study of 841 mother-child pairs.

“The potential link between maternal inactivity and low lung function in infancy adds to the importance of advising pregnant women and women of childbearing age on physical activity,” she said in an oral abstract presented during the virtual European Respiratory Society (ERS) International Congress.

Jonathan Grigg, MD, professor of pediatric respiratory and environmental medicine at Queen Mary University of London, United Kingdom, who was not involved in the study, commented that it “offers a fascinating hint that increased physical activity of mothers is associated with better lung function in their babies and, therefore, possibly their health in later life. More research is needed to confirm this link, but it is important that women feel supported by their healthcare providers to be active in a way that is comfortable and accessible to them.”

Physical activity during pregnancy has been demonstrated to reduce the risk of preterm birth and cesarean birth, and to children being born either abnormally small or abnormally large for their gestational age, she explained.

To see where physical inactivity in the first half of pregnancy is associated with lower lung function in otherwise healthy 3-month old infants, Gudmundsdottir and colleagues looked at data on a mother-child cohort from the prospective population-based PreventADALL study, which was designed to study prevention of atopic dermatitis and allergies in children in Norway and Sweden.

A total of 814 infants (49% female) had available measures of tidal flow volume in the awake state at 3 months, as well as mother-reported data on physical activity at 18 weeks of pregnancy.

The investigators categorized the mothers as inactive, with either no or only low-intensity physical activity, “fairly” active, or “very” active based on self reporting.

Maternal physical activity level was not significantly associated with continuous tPTEF / tE, but the investigators did find that the offspring of inactive mothers were significantly more likely than the children of fairly or very active mothers to have a tPTEF / tE below 0.25 in both univariate analysis (odds ratio [OR], 2.15; P = .011), and in multivariate analysis controlling for maternal age, education, parity, pre-pregnancy body-mass index, parental atopy, and in-utero exposure to nicotine (OR, 2.18; P = .013).

In univariate but not multivariate analysis, children of inactive mothers were significantly more likely than infants of more active mothers to have tPTEF / tE values below the 50th percentile (OR, 1.35; P = .042).

“We observed a trend that adds to the importance of advising women of childbearing age and pregnant women about physical activity. However, there may be factors that affect both maternal physical activity and lung function in offspring that we have not accounted for and could affect the results, and so more research is needed,” Gudmundsdottir said in a statement.

Grigg pointed out that “it’s also worth keeping in mind that the single most important thing that mothers can do for their own health and that of their baby is to ensure that they do not smoke or use other tobacco products before, during, and after pregnancy. A smoke-free home has the biggest impact on lung function and health in childhood and later life.”

The study was supported by the University of Oslo. Gudmundsdottir and Grigg have disclosed no relevant financial relationships.

Neil Osterweil, an award-winning medical journalist, is a long-standing and frequent contributor to Medscape.