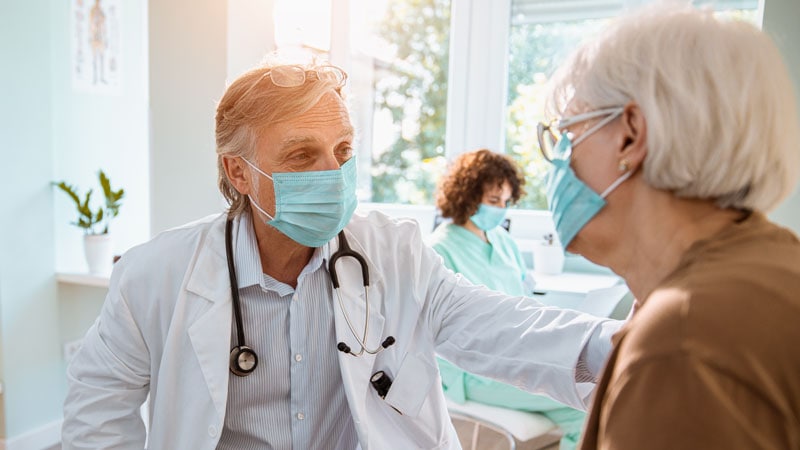 Physicians in several specialties continue to see sharp drops in patient visits, but for internists, the numbers have rebounded since the beginning of the pandemic.

Internists are seeing only 3% fewer patients than they did before the COVID-19 pandemic (72 per week on average now vs 74 before the pandemic). Comparatively, for pediatricians, patient voume remains down 18%. Dermatologists, otolaryngologists, and orthopedists report that visits are down by about 15%.

The number of hours worked also rebounded for internists. In fact, some report working slightly more hours now than they did before the pandemic (52 hours a week, up from 50).

It helped to be self-employed. These internists made $276,000 on average, compared with $238,000 for their employed counterparts.

Half Say Pay Is Fair

Internists are also near the bottom among specialists who feel they are fairly compensated. As in last year’s survey, just more than half of internists (52%) said they felt that they were fairly paid this year. By comparison, 79% of oncologists reported they were fairly compensated, which is on the high end regarding satisfaction, but only 44% of infectious diseases specialists felt that way.

Some indicators in the survey responses may help explain the dissatisfaction.

Internists are near the top in time spent on paperwork. On average, they spent 19.7 hours on paperwork and administration this year, up slightly from 18.5 last year. Infectious disease physicians spent the most time on those tasks (24.2 hours a week), and anesthesiologists spent the fewest, at 10.1 hours per week.

Administrative work was among many frustrations internists reported. The following are top five most challenging aspects of the job, according to the respondents:

Conversely, the most rewarding aspects were “gratitude/relationships with patients” (31%); “knowing that I’m making the world a better place” (26%); and “being very good at what I do” (20%).

More Than One Third Lost Income

More than one third of internists (36%) reported that they lost some income during the past year.

Among those who lost income, 81% said they expect income to return to prepandemic levels within 3 years. Half of that group expected the rebound would come within the next year.

“The stakes for the Quality Payment Program ― the program that incorporates MIPS — are high, with a 9% penalty applied to all Medicare reimbursement for failure to participate,” says Elizabeth Woodcock, MBA, CPC, president of the physician practice consulting firm Woodcock and Associates, in Atlanta, Georgia.

But asked about their specialty, internists’ enthusiasm decreased. Only 68% said that they would make that same choice again.

That was up considerably, however, from the 2015 survey ― for that year, only 25% said they would choose internal medicine again.

Marcia Frellick is a freelance journalist based in Chicago. She has previously written for the Chicago Tribune and Nurse.com and was an editor at the Chicago Sun-Times, the Cincinnati Enquirer, and the St. Cloud (Minnesota) Times. Follow her on Twitter at @mfrellick.

Suicide attempts among adolescent girls surged by more than 50% during pandemic, CDC says
EMA Seeks More Data on Myocarditis After COVID-19 Shots
From 3-Ingredient Brownies to Mashed Potato Fries, Here Are 103 Vegan and Grain-Free Recipes
Measuring how patterns of gene expression change in children may help predict T1D progression
Youth with a history of foster care have less access to oral health care