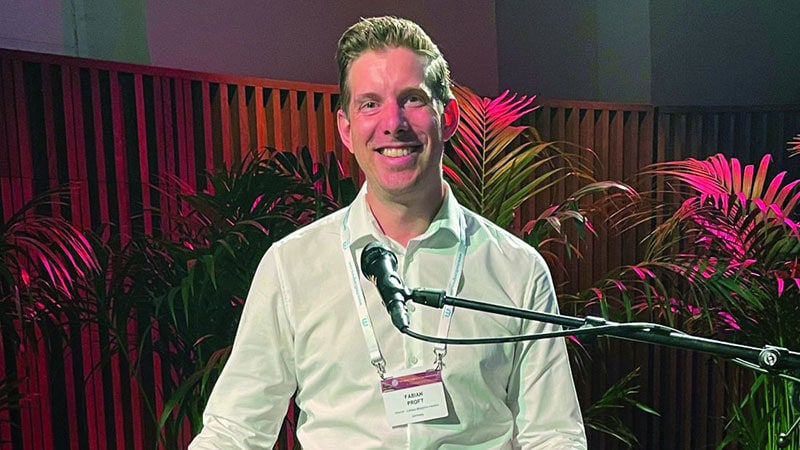 GHENT, BELGIUM — A strong numerical signal suggests the addition of a selective cyclooxygenase-2 (COX-2) inhibitor to a tumor necrosis factor (TNF) inhibitor can reduce spinal radiographic progression in patients with active radiographic axial spondyloarthritis (axSpA) over 2 years, although results are not statistically significant.

Lead researcher and rheumatologist, Fabian Proft, MD, based at Charité University Medicine, Berlin, presented the findings of the study at the 13th International Congress on Spondyloarthritides.

Only 97 patients completed the study, and its follow-up period lasted 2 years, which is a relatively short period of time in which to determine the effects of an intervention that might affect structural progression of the spine, Proft said. 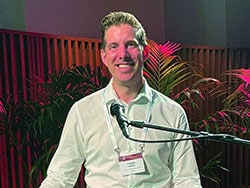 “Based on these data, I won’t treat all my patients with celecoxib,” he told this news organization. However, he added that, “If I have a patient with residual symptoms under biological DMARDs [disease-modifying antirheumatic drugs], and I feel they are at high risk of radiographic spinal progression and they still have symptoms, then I would add in an NSAID — and for that I’d choose a selective COX-2 inhibitor based on radiographic spinal progression data.”

Walter P. Maksymowych, MD, rheumatologist from the University of Alberta, Calgary, commented on the study findings in an interview. “This is an important clinical question because we want to know whether we should be adding an anti-inflammatory in patients who are on biologic therapies. There’s been a long debate and investigation into whether anti-inflammatories might prevent new bone formation and thereby prevent disease progression.”

He went on by acknowledging that there was no statistically significant difference in the primary endpoint (change in modified Stoke Ankylosing Spondylitis Spinal Score [mSASSS]) between the groups, but added that, “there was a sizable numerical difference, and I think this leaves the community somewhat hanging dry without a definitive answer. However, I do have concerns about whether there was an adequate sample size to address the study question.”

The study aimed to investigate the effect of a selective COX-2 inhibitor when added to anti-TNF therapy with golimumab (Simponi), compared with golimumab therapy alone, on the progression of spinal structural damage over 2 years in patients with active radiographic axSpA.

“To date, we don’t have many treatments with evidence of reducing spinal radiographic progression in axSpA,” Proft said. “There was one study showing an effect of celecoxib, but another with diclofenac that failed to show any effect. As a result, there was a hypothesis that perhaps there was a selective COX-2 inhibitor effect.”

To investigate this further, Proft selected patients with high radiographic axSpA disease activity (Bath Ankylosing Spondylitis Disease Activity Index [BASDAI] ≥ 4) and with existing structural changes — both recognized risk factors for further progression. Participants had to have either an elevated C-reactive protein (CRP) > 5 mg/L and/or ≥ 1 syndesmophyte at screening, as well as a history of inadequate response to at least two DMARDs. Other patient risk factors for radiographic spinal progression included male gender and smoking. Duration of axSpA was unlimited.

Three radiographic readers were blinded for all clinical data and chronology. The primary endpoint was the change in mSASSS, while secondary endpoints were the presence of new syndesmophytes and clinical outcomes including activity, function, mobility, and health-related quality of life, as well as safety assessments.

No Statistical Significance but a Numerical Difference Found

“The primary outcome, which was change in mSASSS score, clearly shows a numerical difference between the combination arm at 1.1 and the monotherapy arm at 1.7 points, showing more structural progression in the monotherapy arm, compared to the combination arm,” Proft reported. However, he stressed that this difference did not reach statistical significance.

New syndesmophytes occurred in 25% with monotherapy and 11.1% with combination treatment. Again, this difference did not reach statistical significance.

“This might be due to sample size but also to the length of follow-up because a longer follow-up [given structural changes occur relatively slowly] might have shown a greater difference,” Proft pointed out.

Clinical data, according to Ankylosing Spondylitis Disease Activity Score with CRP and BASDAI, showed that both groups responded very well to therapy, and there were no differences seen between the two groups in terms of clinical parameters.

“It is important when we add a drug — and we know that NSAIDs can have safety concerns — that we do not see any statistically significant serious adverse events between patient groups,” Proft noted.

Proft added that four patients discontinued in the combination arm, compared with only one in the monotherapy arm, with a variety of different reasons for the discontinuations.

The study was supported by a grant from the German Ministry of Education and Research, and golimumab was provided free of charge by Merck Sharp & Dohme. Proft reported serving on speakers bureaus for Amgen, AbbVie, Bristol-Myers Squibb, Celgene, Janssen, Merck Sharp & Dohme, Novartis, Pfizer, Roche, and UCB; serving as a consultant to Novartis; and receiving grant or research support from Novartis, UCB, and Lilly. Maksymowych declared having no relevant conflicts of interest.

Dogs can detect changes in breath and sweat produced in response to stress
Natural sleep support: 8 science-backed ways to help you sleep soundly
Third-trimester fetuses with in utero opioid exposure exhibit smaller brain size on MRI
Dogs shown to identify human stress condition odors
Lululemon Is Launching a Membership Program — and It Has Some Big Fitness Names on Board