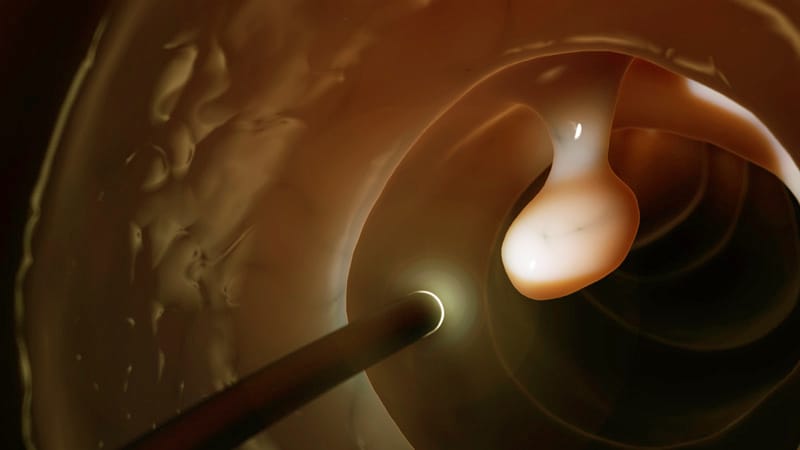 A team of researchers, led by Dennis Yang, MD, with the Center for Interventional Endoscopy at AdventHealth in Orlando, Florida, compared polyp recurrence after patients received EMR with margin marking vs recurrence after conventional EMR in a historical control group. They conclude the simple margin-marking strategy may offer an alternative to margin ablation.

The findings of the study were published online November 29 in Gastrointestinal Endoscopy.

For EMR-MM, cautery marks were drawn along the lateral margins of the polyp with the snare tip. EMR followed with resection of the healthy mucosa with the marks.

Physicians can confirm complete resection, including a healthy margin, when no cautery marks are visible after EMR, the authors write.

A follow-up colonoscopy was performed 3 to 6 months later, the results of which were compared against historical controls.

After 6 months, EMR-MM led to a lower recurrence rate compared with the historical control group with traditional EMR (8% vs 29%, respectively; P < .001).

“This strategy allowed a more reliable wide-field EMR, which may account for why our preliminary results demonstrated an 80% reduction in the likelihood of recurrence even after controlling for other factors, including polyp size and histopathology,” the authors write.

Recurrence risk has been one of the main limitations of EMR compared with surgery, with rates from 10%-35%, the authors note, though it has fewer adverse reactions and offers better quality of life than surgery.

Yang told Medscape Medical News that multiple studies have looked at possible factors for recurrence, which is thought to primarily occur at the lateral resection margins of the polyp.

“That’s based on recent data that has shown that burning the resection margins after you actually take the lesion out reduces recurrence,” he said. “What that indirectly implies is that whenever we resect something, we may think we’ve got the entire lesion at the lateral margins, but we don’t.”

As Yang described, it was this implication that led to the premise of the study.

“If we were to somehow put visible marks outside the margins of the lesion, the marks would serve as visible cues to tell us how much more tissue we needed to resect, and thereby help us get a more reliable way of ensuring clean resection margins.”

Gastroenterologist Douglas Rex, MD, Distinguished Professor Emeritus of Medicine at Indiana University School of Medicine in Indianapolis, who was not involved in the study, told Medscape Medical News that he is not convinced that it is necessary or wise to use the margin-marking technique described in the paper over the current standard of care.

Rex explained that presently physicians inject large lesions submucosally with fluid colored for contrast to delineate the margin of the polyp. This raises the question, if you can see the lesion well with that method, do you need to place the marks before you start around the border on the normal mucosa, as they did for the margin-marking group in this study?

“Most of the evidence — if you look at the big meta-analyses — suggests that the recurrence rate with traditional methods is around 15%,” he said.

He added that even the recurrence rate in the current study’s active treatment arm is much higher than the 2%-5% rate seen in recent thermal ablation trials by Klein and colleagues and Sidhu and colleagues, both published in Gastroenterology.

“The methods described in those two papers should be considered the current standard of care,” Rex said. “Neither one of those involves this [margin-marking] method.”

Yang agrees that the Klein and Sidhu trials represent the standard of care, but he says it’s important to note that the 2% recurrence may not represent the actual practice of endoscopists of all skill levels.

“These are highly controlled studies coming from very experienced endoscopists,” he said.

“Our data are not trying to supplant what the high-quality studies on thermal ablation have shown. The point is to show that this is a concept that could potentially help,” he said.

“What I’m proposing is a potential alternative that could be better than that. Obviously, we won’t know until a comparative type of trial is performed.”

On that point, Yang and Rex agree.

Rex said a randomized control trial would clarify some points and be useful to compare margin marking directly with the current standard of care, “which is to remove the whole thing and then burn up the margin.”

“Based on what we have seen so far, I would predict the current standard of care would have a very good chance of winning in terms of efficacy, because it’s hard to get lower than 2% [recurrence],” he said. “And it might well win with regard to safety, because burning the margin is at least theoretically safer than what they’re doing here.”

“I do think it’s reasonable to do margin marking for underwater EMR,” Rex said.

Marcia Frellick is a freelance journalist based in Chicago. She has previously written for the Chicago Tribune, Science News, and Nurse.com, and was an editor at the Chicago Sun-Times, the Cincinnati Enquirer, and the St. Cloud (Minnesota) Times. Follow her on Twitter at @mfrellick .