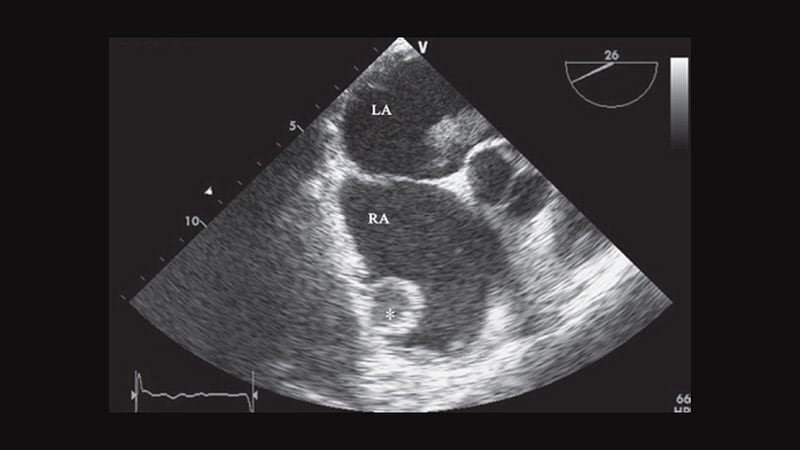 Of patients with symptomatic, obstructive hypertrophic cardiomyopathy treated with the investigational oral agent mavacamten, more than twice as many, compared with placebo, had a very large improvement from baseline in their summary quality of life score after 30 weeks of treatment in a pivotal trial with 194 patients evaluable for this endpoint.

The trial’s health-related quality of life assessment, the Kansas City Cardiomyopathy Questionnaire (KCCQ), also showed an average improvement of more than 9 points, compared with placebo, in summary KCCQ scores among 98 mavacamten-treated patients, and a nearly 15-point improvement from baseline that represents a “moderate to large” improvement in overall health-related quality of life, John A. Spertus, MD, said at the annual scientific sessions of the American College of Cardiology.

The 9-point average incremental improvement on mavacamten, a selective cardiac myosin inhibitor, compared with placebo-treated patients, is “the largest drug-mediated benefit we’ve ever observed on the KCCQ,” said Spertus, who spearheaded development of the KCCQ. Concurrently with his report the results also appeared online in the Lancet.

“Given the strength of the data, I’d reach for this drug early” to treat patients with obstructive hypertrophic cardiomyopathy (HCM), added Spertus, a professor and cardiovascular outcomes researcher at the University of Missouri–Kansas City and clinical director of outcomes research at Saint Luke’s Mid America Heart Institute, also in Kansas City.

No available treatment for obstructive HCM has had “as vigorous an assessment of impact on health status,” and the study that supplied the data he and his associates analyzed, EXPLORER-HCM, is “the largest trial ever done” in patients with HCM, he added.

Management guidelines for HCM released last year by the ACC and American Heart Association named beta-blockers “first-line” medical therapy for the disorder, with the calcium channel blockers verapamil or diltiazem named as “reasonable alternatives” to beta-blockers. However, these commonly used agents have “limited” evidence supporting health-status benefits in patients with HCM, Spertus and coauthors wrote in their report.

“This is an important study,” commented Matthew W. Martinez, MD, director of sports cardiology and a HCM specialist at Morristown (N.J.) Medical Center. But “given the longevity of HCM we need follow-up that goes beyond 30 weeks,” he said as designated discussant for the report.

EXPLORER-HCM randomized 251 patients with symptomatic obstructive HCM at 68 centers in 13 countries during 2018-2019. The 30-week trial’s primary outcome was a composite to assess clinical response, compared with baseline, that included a 1.5-mL/kg per min or greater increase in peak oxygen consumption (pVO2) and at least one New York Heart Association (NYHA) functional class reduction; or a 3.0 mL/kg per min or greater improvement in pVO2 and no worsening of NYHA class.

Patients averaged about 59 years of age, about 60% were men, and their pVO2 at entry averaged about 20 mL/kg per min. About 73% were in NYHA functional class II, with the remainder in functional class III. Patients received mavacamten as a once-daily oral dose that gradually up-titrated during the trial to reach targeted reductions in each patient’s plasma levels of the drug and in their left ventricular outflow tract gradient.

The results showed that, after 30 weeks on treatment, the primary endpoint was reached by 37% of 123 patients on mavacamten and by 17% of 128 patients on placebo, a significant difference in an intention-to-treat analysis. About 70% of patients completed their KCCQ after 30 weeks, which meant that fewer patients were in the quality of life analyses, according to the report that was published in The Lancet.

Based on these results the drug is now under consideration for approval by the Food and Drug Administration, with a decision expected by early 2022.

More detailed analysis of quality of life findings in the new report also showed that, while average KCCQ scores (both overall summary score and clinical summary score) steadily improved with mavacamten treatment, compared with control patients, through 18 weeks on treatment, the scores then roughly plateaued out to 30 weeks. This was followed by a sharp reversal back down to baseline levels and similar to control patients 8 weeks after stopping mavacamten, suggesting that the drug’s benefit quickly fades off treatment and hence must be taken chronically.

The responder analysis showed that 9% of patients on mavacamten had a worsening in their KCCQ overall summary scores by more than 5 points after 30 weeks, compared with 23% of the control patients. In contrast, a very large improvement in KCCQ score, defined as a rise of at least 20 points from baseline after 30 weeks, occurred in 36% of those who received mavacamten and in 15% of the controls. The between-group difference indicates a number needed to treat with mavacamten of roughly five to produce one additional patient with a very large improvement in KCCQ overall summary score, Spertus noted.

EXPLORER-HCM was sponsored by MyoKardia, the company developing mavacamten and a subsidiary of Bristol-Myers Squibb. Spertus has been a consultant to MyoKardia, as well as to Abbott, Amgen, Bayer, Janssen, Merck, and Novartis. He has received research support from Abbott Vascular, and he holds the copyright for the KCCQ. Martinez has been a consultant to and received honoraria from Bristol-Myers Squibb.