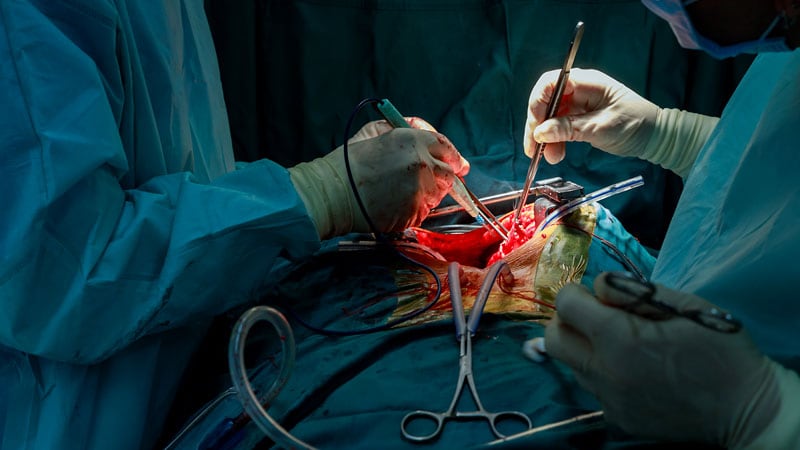 Neoadjuvant atezolizumab prior to lung cancer surgery was well tolerated by patients with stage IB-IIIB lung cancer and produced a 21% major pathologic response rate, according to the primary analysis of the Lung Cancer Mutation Consortium (LCMC) 3 study.

The LCMC3 study is “unique” because it is the largest monotherapy trial of checkpoint inhibition in resectable NSCLC, and it’s “a landmark study” because it validated results from smaller trials and can serve as a benchmark for future ones, said Jay M. Lee, MD, of the University of California, Los Angeles.

Lee presented results from LCMC3 at the 2020 World Congress on Lung Cancer (Abstract PS01.05), which was rescheduled for January 2021.

The study included 181 patients, median age 65 years, with stage IB-IIIB NSCLC. The vast majority (90%) of patients were current/former smokers, and two-thirds had a nonsquamous histology. Patients were categorized in the following stages: 17 patients were staged at IB, 20 were IIA, 55 were IIB, 72 were IIIA, and 17 were IIIB.

The primary endpoint was major pathological response, defined as no more than 10% viable tumor cells at surgery, in patients without epidermal growth factor receptor or anaplastic lymphoma kinase mutations.

Following atezolizumab treatment, 43% of patients were down-staged, and 19% were up-staged. Some degree of pathological regression was observed in all but 3 of the 159 patients who underwent resection.

“We demonstrated that more than half of patients resected with a minimally invasive operation. Remarkably, only 15% required thoracotomy. The 92% complete resection rate is comparable, if not superior to, preoperative chemotherapy trials,” Lee said.

The majority (88%) of patients underwent surgical resection within a 20-day protocol window. The median time from end of neoadjuvant therapy to surgery was 22 days.

“Historically, the neoadjuvant chemotherapy window is much later for surgery, 3 weeks from neoadjuvant therapy, and that can be stretched to up to 56 days,” Lee said.

In an exploratory analysis, the 1.5-year overall survival rate was 91% for stage I and II disease and 87% for stage III disease. The survival in both cohorts was superior to that expected historically, Lee noted.

One patient died following surgery after the first 30 days, which was deemed unrelated to treatment. Another patient died between 30 and 90 days from treatment-related pneumonitis.

“The LCMC3 study successfully met its primary endpoint of achieving major pathological response,” Lee concluded. “Neoadjuvant atezolizumab monotherapy was well tolerated, and resection was performed with low perioperative morbidity and mortality, usually within a narrow protocol window and with a short time frame from completion of atezolizumab and with a correspondingly high complete resection rate.”

“I would consider single-agent ICI neoadjuvant therapy for patients with early-stage disease and poor performance status, and an ICI plus chemotherapy for more advanced resectable cases, like locally advanced disease,” Toyooka said.

Baby talk: preventative counselling for new parents
Countdown to 100,000 OncoLife Survivorship Care Plans: What is a Survivorship Care Plan?
Words from the Wise about Covid and the Heart
This $60 Accessory Allows You to Swivel Your Peloton Screen Without Upgrading Your Bike
White House: COVID-19 Numbers Take a ‘Concerning Shift’