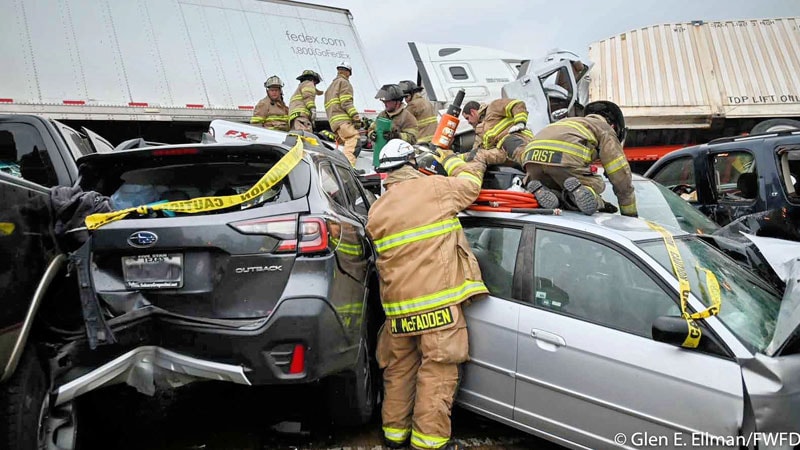 A pediatric nurse whose SUV slid into the 130-plus-car pileup near Fort Worth, Texas, last week crawled out the back hatch, walked almost a mile, and hitched a ride with a coworker to get to her job.

The massive pileup killed six people on February 11, according to several news reports, when vehicles spun out on an icy bridge on I-35. 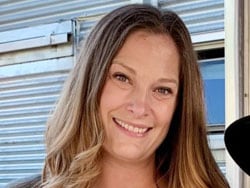 Rebecca Benson, RN, a nurse for 6 years at Cook Children’s Medical Center in Fort Worth, told her story in an interview with the media team at the hospital.

The roads were dry as she left her north Fort Worth home in the dark for her 7:00 a.m. shift, she said. But when she came upon the Trinity River Bridge, she started to feel the grip of her tires slip away and looked up to see the wall of mangled trucks and cars ahead with no way around.

“I put my foot on the brake, said a prayer, and I literally thought to myself, ‘I could very possibly die in 2 seconds,’ ” she said.

She could see an 18-wheeler beverage truck and a car-hauler semi in the wreckage, their cabs touching in a V and she aimed the steering wheel at the center of the V between them, thinking the impact might be softened.

Still, she said, “I hit so hard my ponytail holder came out of my hair.”

Then she looked in the rearview mirror and saw the headlights from semis sliding toward her, their drivers about to experience what she just had.

She heard and felt the jolt of each crash behind her, but she said she guessed right that being wedged in the center of the V offered some protection.

“It was so unbelievably terrifying,” she said. She waited until she stopped feeling the crunches as the crashes built up farther and farther behind her.

Her front doors were pinned shut but eventually someone walking from car to car opened her back hatch to see how she was and she was able to climb out the back.

Benson took this photo as she stood behind her car after crawling out the hatchback.

Benson took this photo as she stood behind her car after crawling out the hatchback.

A coworker texted her as she surveyed the scene to warn her about delayed traffic without knowing Benson had just lived through the pileup that was causing it.

Benson asked where the coworker was; he was stuck about a mile behind the crash on the nonexpress side of the highway in the traffic jam. She walked along northbound 35 until she found him, climbed over the barrier and into his car.

She called her husband, Ryan Benson, and told him she was sore but fine. She told him she wanted to clock into work where she could help others instead of incessantly replaying in her mind the sequence of events that day.

“It was the decision that made the most sense to me,” she said.

Ryan Benson told Fox News the next day, “Today, it’s the reality, the realization that I almost lost my whole world yesterday,” he said. “I am so unbelievably proud of her. So proud. And so grateful. We’ve been married for over 18 years, and we have two kids, and we have a life.”

Benson and her coworker went to Cook Children’s when the traffic thinned and Benson worked a partial shift before she gave in to her husband’s pleadings to let him pick her up and take her to the hospital to get checked out.

She said she is eternally grateful but acutely aware of what others suffered.

“I have survivors’ guilt already,” she said. “The fact that I’m not severely injured or dead is nothing short of a miracle.

“My heart breaks for all the people who lost loved ones and have loved ones in serious condition,” she said.

Marcia Frellick is a freelance journalist based in Chicago. She has previously written for the Chicago Tribune, Science News, and Nurse.com and was an editor at the Chicago Sun-Times, the Cincinnati Enquirer, and the St. Cloud (Minnesota) Times. Follow her on Twitter at @mfrellick.