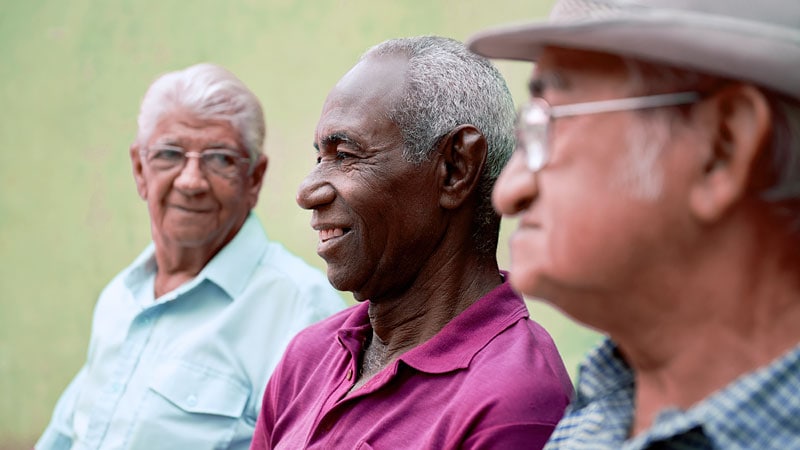 Contrary to long-held assumptions that race determines the risk of dying from prostate cancer, a unique analysis of studies from the past 60 years involving more than one million patients has shown that when social factors are removed from the picture, prostate-cancer mortality among Black people is similar or lower than that among White men.

The authors called on future researchers to move away from a “race-based” view of cancer disparities to one that seeks ways to measure and modify a person’s milieu.

A superficial glance at the numbers suggests that prostate-cancer mortality is heavily dependent on race, given that Black men are more than twice as likely to die from prostate cancer than White patients. For example, the latest cancer data from the Centers for Disease Control & Prevention show that 37 per 100,000 non-Hispanic Black people died of prostate cancer in 2019, while only 18 per 100,000 non-Hispanic White men died of prostate cancer, as indicated in death certificates.

However, such simple comparisons might be misleading for researchers trying to assess and remedy healthcare disparities. This is the conclusion of a unique analysis of 60 years’ worth of science by Randy Vince, MD, and colleagues. Vince, who is Black, is a urologic oncologist at Case Western Reserve University, Cleveland, Ohio.

He, along with co-authors in five states, concluded that many past studies that compared Black and White patients were fatally flawed because they failed to take into account social determinants of health, such as standardized treatment, geography, or insurance benefits.

The study by Vince and colleagues was published online on January 11 in JAMA Network Open.

“Although hundreds of studies have demonstrated worse health outcomes for Black patients than other races,” write the authors, “race is a social construct and not a causal variable or a surrogate for innate biology.”

For their study, Vince and colleagues scoured the scientific literature back to 1960 and singled out research articles that compared prostate cancer survival and overall survival among Black and White men in the United States.

The researchers gave each of these studies a score based on how thoroughly the authors had compensated for factors that are known to increase cancer deaths, such as geography, lack of equitable and harmonized insurance benefits, nonstandardized treatment, low income, and poor insurance status. The rationale was that these social determinants of health could be affecting the likelihood of dying from prostate cancer independently of the person’s race.

The final analysis melded data from more than one million patients and 47 studies.

Vince’s team discovered that many studies made little or no attempt to adjust for key variables that could affect a person’s risk of dying from prostate cancer. For example, only 32% of the articles accounted for income, just 13% took notice of insurance status, and only 17% adjusted for geographic region.

In studies with minimal or no adjustments for social factors, prostate cancer mortality among Black men was 29% higher (P < .001) and overall survival was 17% lower (P = .02) than among White men.

Conversely, studies that “better accounted for [social determinants of health]” showed that rates of prostate cancer deaths were 14% lower among Black patients than among White patients (P = .02), and overall survival was similar (P = .23).

The authors conclude, “We believe our findings have wide-ranging importance. Our results align with prior studies that demonstrate that when access to care is equal and treatment is standardized for all patients, Black men have similar or better prostate cancer outcomes.”

The study’s conclusions are echoed by a study in the current issue of JAMA Oncology showing that the amount of “residential racial and economic segregation” in a US county was significantly associated with cancer mortality for the top 13 cancers, including prostate cancer.

Vince and colleagues call on future scientists to be more vigilant about how they analyze their data and about the conclusions they draw. What is needed, the authors write, is to switch from a “race-based” focus to one that shines light on social factors that can be modified in order to reduce the long-standing disparities in prostate cancer outcomes in the United States.

Vince has disclosed no relevant financial relationships. Several co-authors have relationships with industry, as listed in the original article.