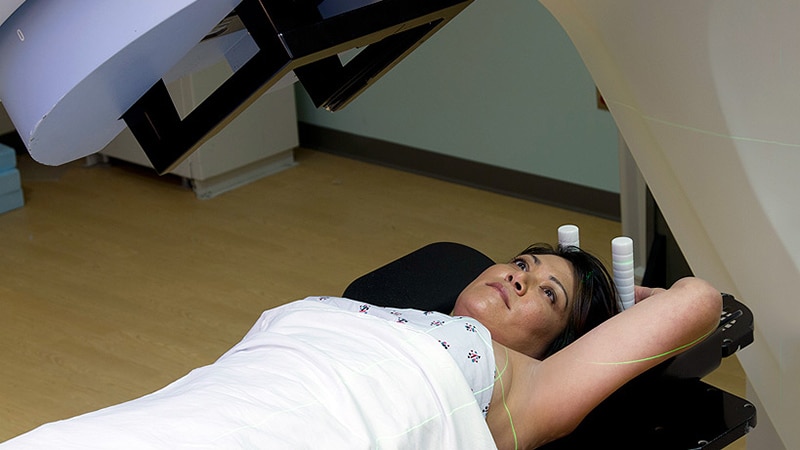 Long-term results give a resounding yes to the question of whether radiotherapy reduces the risk of recurrence over observation alone in women with good-risk ductal carcinoma in situ (DCIS).

The results come from a 15-year follow-up of the only clinical trial ever conducted in this patient population, the RTOG 9804 trial.

“I opened up this study very much hoping that we could prove that we didn’t have to treat these patients, but the study certainly proved me wrong,” lead investigator Beryl McCormick, MD, Memorial Sloan Kettering Cancer Center, New York City, told Medscape Medical News.

“So I think for younger patients with a long life ahead of them, radiation therapy is definitely worth doing,” she affirmed.

The study was published online August 18 in the Journal of Clinical Oncology.

As previously reported, earlier results (at a median follow-up of 7 years) from the trial showed a local failure rate in the radiation group of 0.8% (two patients) compared with 7.2% (19 patients) in the observation group (P < .001).

Now, at a median follow-up of 13.9 years, the 15-year cumulative incidence of ipsilateral breast recurrence (IBR) — the primary outcome — was 64% lower in the radiation group at 7.1% compared with 15.1% in the observation alone group (P = .007) at a hazard ratio (HR) of 0.36. At the time of the current analysis, approximately 300 patients remained in each of the groups, McCormick and colleagues report.

The median time to any IBR was 11.5 years with radiation compared to 7 years with observation, the investigators report. Actual receipt of tamoxifen varied slightly between the two groups, with 58% of patients treated with radiation receiving additional tamoxifen compared with 66% of observation alone patients (P = .05). However, on multivariable analysis, radiation still reduced the risk of IBR by 66% compared with observation alone (P = .007) as did tamoxifen, the use of which reduced the risk of IBR by 55% compared to no tamoxifen use (P = .004).

The cumulative incidence of distant metastases at 15 years was 24% higher in the observation group at 4% compared with 2.3% for those in the radiation group, but the difference was not significant. Nor were there any significant between-group differences in rates of disease-free or overall survival, as McCormick and colleagues point out. At the time of study enrollment, the median age of participants was 58 years and 76% were postmenopausal.

The mean pathologic size of the tumor was 0.6 cm, and for 61% of enrollees, DCIS size was actually 0.5 cm or less. “Initially, the trial specified radiation as 50 Gy in 25 fractions or 50.4 Gy in 28 fractions,” the authors note. However, this protocol was amended in 2001 to allow radiation to be delivered at a dose of 42.5 Gy in 16 fractions. Radiation was given as whole breast irradiation and treatment was delivered over 3 weeks for a total of 16 treatments.

As recorded among patients in the radiation group, there were only three patients (1%) who reported late, grade 3 toxicities. These included breast pain, congestive heart failure or cardiomyopathy, and abnormal ECG findings. “All had right-side treatment,” the authors point out.

McCormick acknowledged that a patient’s decision to undergo radiotherapy is based on a number of factors. “Women in this study who did not get radiation had a recurrence rate of about 1% a year,” she noted. However, if a woman is older or has multiple comorbidities and her prognosis is not good, “they may want to opt out,” she acknowledged, “although there are also women who are afraid of getting radiation radiotherapy, and that’s a big factor too,” she said.

If women are not willing to undergo radiation, McCormick for one would definitely encourage them to take an antiestrogen, although it’s still radiation that reduces recurrence risk the most, she emphasized. “The upside of having a diagnosis of DCIS is that it really is a localized cancer, so the chances of it coming back as invasive and spreading to some other place are extremely small,” McCormick said.

“I definitely hope that the information in our paper will be used to have a frank discussion with women about how they view risk,” she added.

Commenting on the findings, Chirag Shah, MD, director of breast radiation and clinical research, department of radiation oncology, Cleveland Clinic, Ohio, noted that whether it’s DCIS or early stage invasive cancer, multiple studies have now shown that the omission of radiation leads to higher rates of recurrence, “so I’m not surprised by these results,” he told Medscape Medical News.

But he agreed with McCormick that there are patients with good-risk DCIS who may reasonably question whether it’s worth it to undergo radiation.

“Patients who are much older or those who have a lot of other health problems may not live long enough to [enjoy] that difference in recurrence at 15 years, so if a patient has a life expectancy of, say, only 5 years, the benefit of radiation may not be as meaningful for them, and therefore, it can be omitted,” Shah elaborated.

Shah also emphasized that there is a “big difference” between the radiation as offered in the RTOG 9804 study and what is offered now. “Now, we don’t typically do the 3-weeks of radiation that was offered in the study. We often just do 5 days of radiation. So while we believe in radiation, it’s evolved since that study’s conception,” he said.

“But certainly the findings consolidate what we now do,” Shah observed.

The RTOG 9804 trial was funded by the National Cancer Institute. McCormick has declared owning stock and having other ownership interests in Varian Medical Systems. Shah has reported serving as a consultant for ImpediMed, Evicore, and Prelude DX.

Why it’s Important to Keep Taking Your Allergy Drops
TikTok and TOWIE announce new measures to protect mental health
What is Vicoprofen?
FDA panel rejects plan to administer Pfizer’s Covid booster doses to general public
My Journey to the Root of Empathy