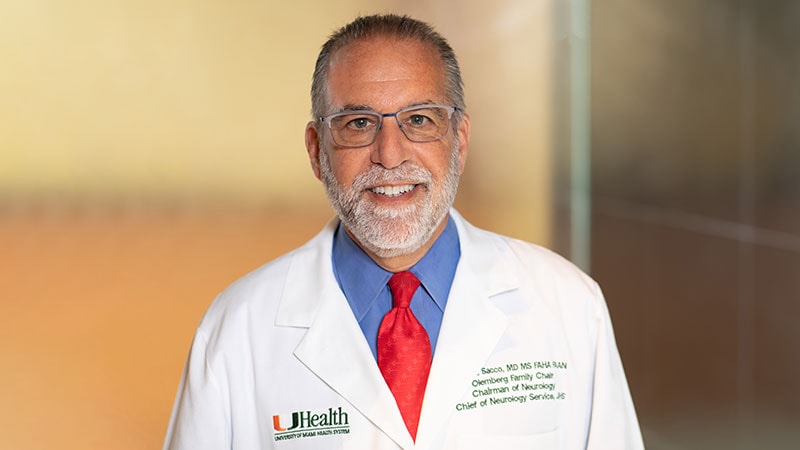 He died of a brain tumor at his home in Long Island, New York, according to an obituary published in Neurology, Circulation, and Stroke.

“Ralph was one of a kind,” Nancy Brown, chief executive officer for the AHA and American Stroke Association, said in a statement. “His leadership was unparalleled, and his warm, generous heart and care transcended his research and clinic to every person fortunate to meet him and likely become a friend,” Brown said.

In a tweet, Natalia S. Rost, MD, professor of neurology at Harvard Medical School, called him, “a dear friend, an inspiring colleague, a generous mentor, an astute scientist, a consummate advocate for brain health worldwide.”

Rest in peace @DrSaccoNeuro 🙏💔 A dear friend, an inspiring colleague, a generous mentor, an astute scientist, a consummate advocate for brain health worldwide. Your impact on neurology is immeasurable – but even greater is your impact on everyone of us whose lives you’d touched https://t.co/j2UKArqVmd

Sacco was chair of the University of Miami Miller School of Medicine Department of Neurology; the Olemberg Family Chair in Neurological Disorders; professor of neurology, public health sciences, human genetics, and neurosurgery; executive director of the Evelyn F. McKnight Brain Institute; director and multi-principal investigator of the Miami Clinical and Translational Science Institute; and senior associate dean for clinical and translational science.

Sacco was a population-based researcher in the field of cerebrovascular diseases.

As founder of the Northern Manhattan Study, he paved the way for examining the differences in stroke risk related to race, ethnicity, sex, and neighborhood, and realizing the impact of modifiable lifestyle behaviors, such as alcohol consumption and physical activity, on stroke risk.

Sacco was also founder and executive director of the Florida Stroke Registry, which consists of 167 Florida stroke centers. He was a member of the National Academy of Medicine.

In an obituary written by Orly Avitzur, MD, current president of the AAN, she notes that he “was the only physician to have become both the president of the AHA (2010-2011) and the AAN (2017-2019), positions that reflected the respect and admiration of professional colleagues earned over the years.”

During his tenure as AAN president, Sacco led an initiative to ensure that academic neurology, from department chairs to professors to students, knew about the abundance of Academy resources available to them, the AAN notes in a statement on his passing.

Sacco was a “strong proponent of enlarging the neurology workforce through the academic pipeline and promoted the concept of the ‘newrologist’ to get people excited in careers in neurology, moving beyond just diagnosis and treatments to include interventions, preventative care, and the future of regenerative care,” the AAN said.

In addition to his husband, Scott Dutcher, Sacco is survived by his father, Anthony P. Sacco, and his wife, Rosemary; and his four siblings and their families, along with many nieces and nephews.

Jim Cramer’s Investing Club meeting Thursday: Stocks rise, Eli Lilly, Meta
“The Trust Circle”: Inclusion of indigenous patients in clinical trials
What Is RxPass, and Can It Save You Money on Prescription Medication?
Newly discovered asteroid made one of the closest approaches of Earth
10-year mental health and wellbeing plan scrapped