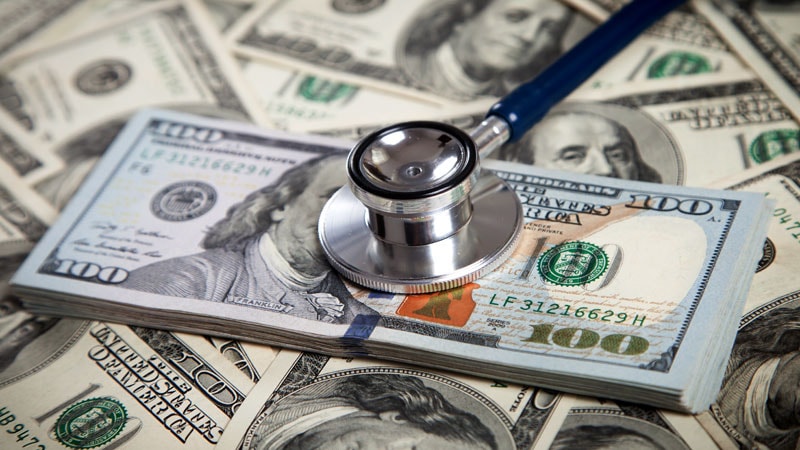 Practicing rheumatologists in the United States received more than $220 million from pharmaceutical companies during 2014-2019, with payments increasing each year, according to findings from a descriptive study of the Centers for Medicare & Medicaid Services Open Payments Database.

Rheumatologists have identified conflicts of interest as an ethical concern, but the details of industry payments to rheumatologists have not been investigated, wrote Michael Putman, MD, of the Medical College of Wisconsin, Milwaukee, and colleagues in Arthritis & Rheumatology. “Payments among rheumatologists may be of particular interest,” given their frequent prescription of expensive and primarily on-patent biologic and targeted disease-modifying antirheumatic drugs (DMARDs), the researchers said.

Overall, women made up 43% of the study population and received 34% of the total payments.

The impact of small payments cannot be discounted, they said, “as even small gifts may affect behavior and are associated with prescribing patterns.” The impact of large payments on behavior and practice deserve further investigation, “but it is notable that a recent evaluation of rheumatology clinical practice guidelines identified substantial involvement from rheumatologists who had accepted large values of industry payments,” the researchers added.

Of note, the data showed that H.P. Acthar gel was among the top 10 agents for total payments, and “over 90% of rheumatologists who frequently prescribe H.P. Acthar gel have also received H.P. Acthar–related payments, raising the possibility that such payments have influenced prescribing behavior,” given the lack of high-quality evidence to support its use and the availability of less expensive alternatives, the researchers said.

The study findings were limited by several factors, including the focus only on general payments to rheumatologists, and the lack of external sources to verify payments, the researchers noted. “Most importantly, this was a descriptive study, and the degree to which payments have influenced physician behavior lies outside the scope of this work. Future studies should investigate the degree to which industry payments have influenced prescribing in the field of rheumatology.”

Focus on Collaborations That Add Value

The study is important because previous data on the magnitude of payments or payment patterns from pharmaceutical companies to practicing rheumatologists were limited, lead author Putman said in an interview.

“I was most surprised by some of the medications that received high values of payments,” he said. “Many payments were linked to medications that we use commonly and that have high-quality data supporting their use. That was not surprising, and you could imagine dollars spent on [interleukin]-23 or IL-17 inhibitors being used in a way that is valuable to other physicians or to patients with rheumatic diseases. On the other hand, some medications – most notably H.P. Acthar gel – have no high-quality data supporting their use, are used by a very small cadre of physicians, and are extraordinarily expensive. At least in my opinion, there is no world where payments linked to H.P. Acthar gel provide any benefit for physicians or patients.”

Putman said he expected that the patterns and the increases observed in the study are likely to continue.

“Ultimately, I have a somewhat nuanced view of financial conflicts of interest,” he said. “Collaborations between the pharmaceutical industry and rheumatologists have provided extraordinary value to our field. I think rheumatologists should be much more involved in some areas. At the same time, I think we should be much less involved in marketing drugs that provide little value to patients and great cost to society. H.P. Acthar Gel is the classic example of this, but there are others as well. I think future research should focus on how these payments influence behavior and should seek to identify areas where they result in low-value care.” Going forward, valuable collaborations between rheumatologists and the pharmaceutical industry should be encouraged, but collaborations without value should be discouraged, he said.

Mitchell emphasized several points, starting with the temporal trend showing an increase in industry payments beyond the rate of inflation that has not been universal across specialties. He also emphasized the “highly skewed distribution of payments,” with a large majority going to a relatively small number of rheumatologists. “This suggests an industry strategy of targeting ‘key opinion leaders,’ or KOLs, with higher payments,” and which was not surprising, as similar patterns have been seen in other specialties. Mitchell noted that 10 drugs accounted for more than half of the payments, and that “the unifying feature of these drugs is their high cost.”

“The picture of industry strategy that emerges from Putman et al. and other similar reports is that of intense, sustained KOL-focused marketing soon after the release of a new high-margin drug,” he wrote.

Despite the descriptive nature of the study, the findings have clinical implications based on other studies of the consequences of industry payments with respect to care quality, Mitchell said. “Hypothetically, industry spending to promote drugs to physicians could increase dissemination of new, superior drugs, improving patient outcomes.” However, physicians tend to opt for game-changing drugs without added incentive; “it is the less-innovative drugs that industry has to push harder.”

The practice of industry payments for physicians becomes even more difficult to rationalize given the potential for increased out-of-pocket costs and potentially avoidable toxicities for patients, Mitchell said. “Moreover, industry payments serve no unmet need; through our professional societies and other nonprofit sources, we physicians are fully capable of staying up-to-date on new treatments without relying on industry meals and sponsored events.”

Disclosure of Payments Is Important

The study is important because it is essential to understand how public disclosure of industry payments influences financial relationship between the biomedical industry and physicians, said Amarnath Annapureddy, MD, a clinical fellow in cardiology at Yale University, New Haven, Conn., who has studied and written about industry payments to physicians.

Annapureddy said in an interview that he was surprised by how the study findings were opposite to the assumption that public disclosure would dissuade continuation of financial ties between physicians and industry. “This study showed payments increased over time rather than decreasing due to public disclosure.”

However, Annapureddy said that he was not surprised at how few physicians received the bulk of industry payments. “These physicians are considered to be ‘key opinion leaders’ who could influence practicing patterns of other physicians. These findings are similar to payment patterns for other specialties, including cardiology.

“So far, no study has evaluated factors that drive changes in industry payment patterns,” Annapureddy said. “I anticipate the patterns noted in this study will continue at least in the short term. If health care systems mandate physicians to disclose potential conflicts of interest to the patients, it may reduce payments.”

However, “unless, there is a major health policy mandate by government, I anticipate public disclosure of payments through the open payments program will not impact industry-physician ties,” he said. “This study has not evaluated impact of payments on prescribing practices. There are overwhelming data from several studies that showed payments influence physicians practicing patterns, whether it is prescribing a medication or implanting a device.” However, as for additional research, Annapureddy said that it would interesting to see a randomized trial to show whether the way physicians disclose their financial ties with patients would impact their practicing patterns.

This article originally appeared on MDedge.com , part of the Medscape Professional Network.